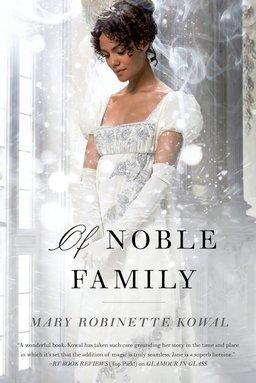 Of Noble Family, the fifth and final novel in Mary Robinette Kowal’s popular Glamourist Histories, is due to arrive later this month.

The first novel, Shades of Milk and Honey, was nominated for a Nebula Award. The previous four books in the series are:

I had the good fortune to hear Mary read from Valour and Vanity at Capricon last year, where she talked about the effort involved in ensuring the language in these novels is appropriate for the time — including creating a Jane Austen dictionary, and making heavy use of the Oxford historical concordance, which lists words in the order in which they appeared in the English language.

Mary is also a high-profile author here in Chicago, and I first met Wesley Chu at the launch party for Without a Summer in 2013.

Here’s the description for Of Noble Family.

Jane and Vincent have finally gotten some much-needed rest after their adventures in Italy when Vincent receives word that his estranged father has passed away on one of his properties in the West Indies. His brother, who manages the estate, is overwhelmed, and no one else in his family can go. Grudgingly, out of filial duty the couple decide to go.

The sea voyage is long and Jane spends enough time unable to perform glamour that towards the end of the trip she discovers that she is with child. They are overjoyed, but when they finally arrive at the estate to complete what they expect to be routine legal tasks, they realize that nearly everything they came expecting to find had been a lie. Also, the entire estate is in disarray, with horrifying conditions and tensions with the local slave population so high that they are close to revolt.

Jane and Vincent’s sense of peril is screaming out for them to flee, but Vincent cannot stand to leave an estate connected with his family in such a condition. They have survived many grand and terrifying adventures in their time, but this one will test their skills and wits more than any they have ever encountered before, this time with a new life hanging in the balance. Mary Robinette Kowal’s Of Noble Family is the final book of the acclaimed Glamourist Histories.

Mary won the John W. Campbell Award for Best New Writer in 2008. She has won two Hugo awards, for her short stories “For Want of a Nail,” and “The Lady Astronaut of Mars.”

See all our reports on upcoming fantasy releases here.

Have not read ‘Valour’ yet, but the first three were very good books indeed. Well worth the price of admission.

Glad to hear you think so, Bobby!