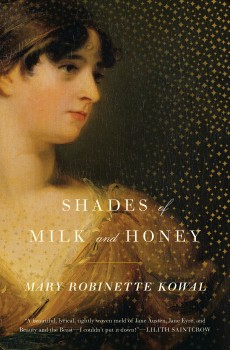 When handsome bachelor Edmund Dunkirk begins paying more attention to Jane, seemingly appreciating that character and intelligence might be more desirable in a long-term partner than a mere pretty face, she is all at once startled and thrilled and reluctant to believe it – and conflicted, because he is the object of her younger sister Melody’s desire. Kowal renders this inner turmoil with consummate skill: Jane wants to believe Dunkirk is interested, and she understands intellectually that she would make a good mate and that he might see that. But she is so used to being overlooked by men, and to subordinating her own wants to those of her more flaky sister, that she opts to err on the safe side, and tells herself she is imagining things, rather than risk being disappointed. On the other hand, she does deserve some happiness, doesn’t she? But is it worth it? It’s a very realistic internal roller coaster ride, all the more compelling because it’s clear Jane isn’t used to such a disruption of her usual poise.

It only gets more complicated when the rakish young Captain Livingston shows up and Melody sort of, but not entirely, aims her affections at him. He also might have an interest in Dunkirk’s sister Elizabeth, though – and she has lately become Jane and Melody’s friend. And then there’s the inscrutable, moody artist Mr. Vincent. Jane just wants him to know how much she admires his work, but all she seems to do is offend him.

For even the casual Austen fan, it won’t take long to figure out which one Jane ends up with. Oh, yes, she does end up with one – Jane is an independent spirit, but this is an Austen-style romance.

It’s a match made on the most worthy terms, however. And the pleasure offered by Shades of Milk and Honey lies in seeing how it’s arrived at. Kowal has created characters who are familiar but a step more nuanced than the Miss Bennets and Mr. Darcys of yore. And by throwing glamour into the mix, she has injected fresh color into an old form, augmenting a not-quite-traditional love story with commentary on the nature and significance of art and artifice.

Josh Wimmer is a writer and editor. He blogs about Hugo-winning novels for io9 and sporadically updates his own website at scribblescribblescribble.com. He lives in Madison, Wisconsin, with his wife, son, and cat.

Love Mary Robinette Kowal, one of my favorite new authors, though I’ve only read her short fiction so far. (I have the novel, but haven’t gotten to it yet.)
She had a novella in Asimov’s last year, “Kiss Me Twice”, about an AI that helps with police investigations, that was exceptional, even better than her award winning “For Want of a Nail.”

Just noticed she’s posted “Kiss Me Twice” on her website, so check it out! (In the Journal section, in the entry titled “I am 43 today”.)

Just read some of her free short stories – I’m gonna have to check out the book. I happen to like Austen’s books and Bronte 😀

Review of Mary Robinette Kowal’s Shades of Milk and Honey

[…] on the web, Black Gate has posted the review I wrote for their print edition last year of Shades of Milk and Honey, by Mary Robinette Kowal. It’s […]