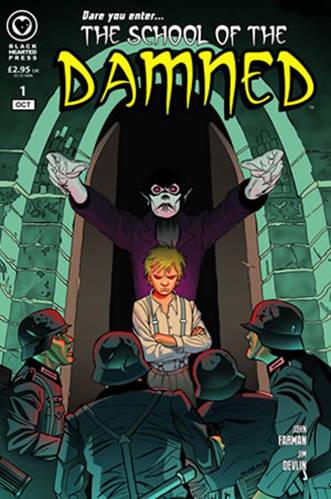 A few nights ago my inbox lit up with an email entitled, “They still suck over here.”

Now I believe I’ve already explained that one of the job hazards I face regularly (besides the toilet seat being left up in Black Gate’s unisex bathroom) is being the recipient of email clearly meant for an entirely different “Goth Chick” in an entirely different profession which is substantially older than my own.

However, in this particular case I recognize the sender as a former colleague from my time as an expat residing in the UK. “Ian” lives in eternal hope of enhancing Black Gate’s content by passing along what he considers appropriate Goth Chick fodder from the British Isles.

Honestly, to talk about the British horror industry is nearly as much of an oxymoron as British top chefs or British fashion designers. And as snarky a sweeping generalization as that may appear; suffice to say that if I ever penned the book A Yankee Goth Chick at Cambridge it would now stand as the primary source on adult bullying.

But even still, I did become chummy with a few nice, normal folks who weren’t still harboring secrets resentments over July 4th and one of these was my good friend Ian.

Of course even Ian isn’t above the occasional “oh look at the silly Americans” riff, and one of his favorites of late was about how Yankee vampires are all soft and chivalrous and sparkly, and apparently now can even make babies.

While across the pond, proper Highgate Cemetery vampires still consider humans a food source rather than a dating opportunity. 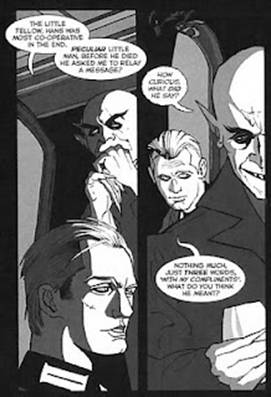 To illustrate Ian included information about — and a tantalizingly few scanned pages from — a hugely popular new comic series out of the UK which is also a soon-to-be-movie that has its roots firmly in real historic events.

School Of The Damned opens in August 1930 on St Kilda, an island group 41 miles to the west of the Western Isles of Scotland which had been inhabited since prehistoric times.

As it happens, August 1930 was the actual month when the last remaining 36 St Kildans abandoned the main island of Hirta following the deaths of several islanders.

Numerous factors led to the evacuation of St Kilda. The islands’ inhabitants had existed for centuries in relative isolation until tourism and the presence of the military in World War I induced the islanders to seek alternatives to the hardships they routinely suffered from the harsh weather conditions and disease.

Following the death of four men from influenza in 1926, the last straw came with the death from appendicitis of a young woman, Mary Gillies, in January 1930. On 29 August 1930, the remaining 36 inhabitants were removed to the Scottish mainland at their own request. 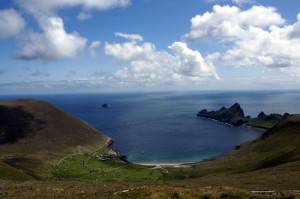 School Of The Damned places responsibility for the archipelago’s abandonment in 1930 squarely on a vampire infestation.

Published by Glasgow’s creator-owned Black Hearted Press, School of the Damned is written by John Farman and illustrated by Jim Devlin and Dave Alexander.

It is described as a “horror and gothic romance,” with “authentic vampires,” at least according to Ian.

Farman has taken Xavier’s School For Gifted Youngsters, The League of Extraordinary Gentlemen and 1920s and 30s horror movies and given them a good shake together, adding in some Nazis for good effect.

Run by the lead character from the 1922 Nosferatu film, School of the Damned includes a werewolf, gargoyles, Medusa, the boy Molock (as seen on the front cover), plus Victor Frankenstein and his latest creation, Jenny. 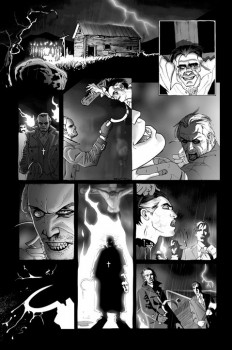 Indeed, satire plays a big part in the visuals, provided by the talented art team of Devlin and Alexander.

The interiors of this comic are entirely black-and-white (or at least the pages I have are), but it never really feels like a creative compromise. As rendered by Devlin, this story seems destined to be told in black and white and the ink illustrations expertly mimic the atmosphere of an old black-and-white horror movie.

With the way Count Orlok is depicted, it looks like the pages have been lifted directly out of Nosferatu.

Click on the image at right or below for larger versions.

School of the Damned feels like reading an old horror movie, which is why I’ve chosen to pretend Ian’s imperialistic comments aren’t right on the mark and instead given him what he’s always wanted.

A mention in Black Gate.

And now, hot on the heels of its October 2011 release, Mandragora Productions and Invictus Films have optioned School of the Damned for the big screen.

Marc de Launay, director and producer at Mandragora, said he was working with two Los Angeles-based producers on a plan for a live action version.

Mandragora Productions and Invictus Films have struck a live action film option for School of the Damned. I’m currently working with two LA producers who are very excited about it – one got a green light from Paramount on a graphic novel property he had last year – and we have a first-look deal with a major studio in LA. 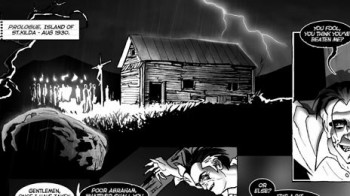 All in, this looks very promising. But the frustrating thing is trying to put my hands on an entire School of the Damned #1. It doesn’t appear to be for sale on Black Hearted Press’ web site or on any of my normal sources for indy comics.

I did manage to locate John Farman’s Facebook page and email address so I’ve reached out to him directly.

Something tells me that owning a #1 of this series may be something for which I will have to (grudgingly) thank Ian.

Are you a fan of indy comics and has any decent horror entertainment except 28 Days Later ever come out of the UK? Post a comment or drop a line to sue@blackgate.com.