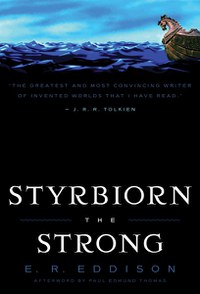 “There is but one way for a man, and that is to remember that none may avoid his fate. This is to a man as the due ballast to the ship, which maketh the vessel indeed loom somewhat deeper, but keepeth it from tossing too lightly upon the uncertain waters.”

As a youth, E.R. Eddison (1882-1945) so loved William Morris’ translations of the Old Norse sagas that he taught himself Old Icelandic, desiring the pure injection of North Sea ice water into his veins that the stories in their original tongue delivered. He carried that love of the Sagas with him as a writer of fantasy fiction. Their echoes can be felt in Eddison’s best known work, The Worm Ouroboros (1922), but four years after the Worm Eddison set to work on the real thing, trying his hand at his own saga Styrbiorn the Strong (1926).

Styrbiorn the Strong tells the story of Styrbiorn Olaffson, teenage heir to the throne of Sweden. Denied his birthright and exiled from Sweden, Styrbiorn spends three years a-viking, during which his power and influence waxes mightily. Three years later he returns to claim his share of the kingdom. Except for a few minor characters everyone in the story is an historical figure. The main facts of the tale are also historical, including the concluding bloody Battle of Fýrisvellir, but the details and characterizations are of Eddison’s own making.

Styrbiorn fell out print long ago and for a time was as hard to come by as an unplundered coastal Irish monastery circa 850 AD. But last year it was reissued in a handsome little volume by the University of Minnesota Press, and the world got a little bit bloodier and brighter. Eddison and J.R.R. Tolkien scholar Paul Edmund Thomas provides an illuminating afterward in this new issuance that details how Eddison wrote his book, a meandering, halting  journey of four years that included careful historical research and a trip to Sidmouth on the coast of Devonshire for inspiration. This new edition also includes a closing note by Eddison in which he details his purpose in writing the novel, which sprang from his love of the hard-edged, unvarnished truth of the sagas: “There is no “Keltic Twilight” here, no barbaric exaggerations, no embroidery, no weaving of words or fancies, no boggling at truth: there is much shrewd insight into character and the springs of action.”

In the best of sagas, Eddison continues in the note, there exists “an atmosphere of tragic and epic grandeur like the grandeur that is about windy Ilios; bringing us, in the end, as Homer brings us, not to take sides with the Greeks or Trojans, with Njal’s sons or the Burners, but to ponder (somewhat perhaps as the Gods may ponder) on the greatness and the pitifulness of human things.”

Pondering the greatness and the pitifulness of human things … one of the things I love about the Sagas is the fact that they show the Northmen—and us, by extension—at their best and their worst, warts and all. Styrbiorn the Strong, though a modern retelling, wonderfully preserves this trait. In the first pages of the book, Styrbiorn leaves the feasting hall of his uncle Erik, abandoning drink and merriment to brood on the howe of his slain father. Styrbiorn is handsome and strong of limb but also grim, stubborn, petulant, and headstrong—traits that render him simultaneously great and tragically flawed. When the beautiful Sigrid joins him on the mounded earth she feels the unease of an impending doom radiating from the young man, a heavy foreshadowing of death:

Sigrid shivered and said, “Come from this place. I am three years older than thou, and can see things thou canst not see. The dead be in this place. Come away.”

The Norse Sagas always end in tragedy because all life ends in darkness. Yet the Sagas also celebrate the triumphs of our too short time here on earth in bold strokes of color. Styrbiorn moves us with its stirring depictions of the northern seas and skies and the great spirits of the men and women of the Viking Age. “The spirit of the sagas I hope is in it, for that is a living spirit: one of the greatest, as I think, that human history can show,” writes Eddison in a previously unpublished letter that serves as a fine forward to the book, again placed here by Thomas.

Styrbiorn also contains shocking outbursts of unexpected violence, and Morris delivers these in the casual, understated style typical of the Sagas. For example when Aki of King Erik’s bodyguard takes offense to Styrbiorn’s calling him a thrall in front of his men the two warriors struggle briefly before Styrbiorn wrests a sax-knife from Aki’s hands and drives it through his neck:

Now all was turmoil in the King’s hall, and much carping and high talk this way and that; for Aki was a man of good kin among the bonders, and many were there who would have done vengeance for him on Styrbiorn without more ado, but that the place and the King’s majesty put them in awe. In the end was all quiet again, and the dead corpse carried out, and men fell again to drinking, yet something less blithely than afore.

A man knifed through the neck and his corpse dragged from the hall, and minutes later the bearded onlookers fall again to their cups, with perhaps only a little less gusto from the bloody incident; this too is what I like about the Sagas, and by extension Styrbiorn the Strong. Their matter is of a different Age, a pre-Christian world with its own morality and laws, both like and unlike our own. Styrbiorn the Strong provides us the opportunity to explore that world and drink deeply of its unique spirit. Highly recommended.

A fine review.
I don’t have this book, have always wanted to read it, and didn’t know it had been re-issued.
Man, I’m all over this like Egil Skallagrimsson on a stash of hack silver.
Thanks!

Thank you for the excellent review.
I’d been wanting to read this since I first heard about it in Black Gate No. 5. Some months ago I was finally able to pre-order it, and almost four months later, here it is. (I’m on the second chapter now.) It’s like receiving a gold rune-covered armband. Unusually, the cover has a smooth waxy feel to it.
So, if you like a good Norse story between waxy covers, you can do no better than this.

Great piece, Ryan. I’m like John — never had the book, always wanted to read it, and am thrilled to hear it’s back in print.

Thanks for the kind words, guys. Yes, you do need to go your nearest bookstore (any of those left?) or Amazon and order this book.

Henry: Funny that you mention the cover. Mine was so waxy I thought it might have been a defect. But no–just very waxy.

It’s what is known as an eccentric cover, I imagine.

Got it. Thanks BG crew!

I was given a then rare copy of this from the olden days I was nuts for as a kid.

Now I have a new ‘worthless’ copy I can abuse through obsessive rereading.

Black Gate » Blog Archive » Maid(en) For Me: Gods Of Metal Back On Tour With Maiden England

[…] does a mid to late 30-something (closing in on 40, if I’m being honest) consumer of books like Styrbiorn the Strong,  Dune, and World War 2 military history do in between bouts of reading and writing posts for […]

[…] after a viking adventure in the vein of Haggard’s Eric Brighteyes or Eddison’s Styrbion the Strong. And if you enjoy this one, Anderson wrote a number of similar […]