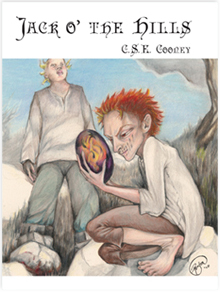 You know that here at Black Gate we toil day and night to bring you the latest news, reviews and opinion on the vast and varied field of modern fantasy. Some of us, however, are not content with merely reporting on great fantasy — we must create it ourselves. When that happens, we celebrate it here with joy and fellowship.

Some of us, mind you, aren’t content with merely creating. No no no. There are those among us who, once they’ve finished creating, skip right along to organizing mass readings, commissioning cover art, and even making an audiobook. Which they read themselves. These folks we don’t so much celebrate as stand around and gawk at in awe.

Of course, I’m talking about the mighty C.S.E. Cooney, Website Editor here at Black Gate, who published the much-praised Jack o’ the Hills, a collection of two linked short stories, in trade paperback just last year through Papaveria Press. Now comes word that C.S.E. has released the first part of Jack o’ the Hills as an audiobook:

Jack Yap is “his Marm’s good boy, maple-syrup mouth, toffee-tongue, such sweetness” — or is he? He’s a rascal, a rapscallion, a downright ragamuffin, and he’s one of the most memorable characters I’ve ever read. It is therefore with great delight that I announce the release of the audiobook of “Stone Shoes,” the first of the two tales that make up Jack o’ the Hills, read by author C.S.E. Cooney and arranged by Jeremy Cooney. Many thanks go out to Jeremy, who also helped with “this GarageBand mumbojumbo.” The audiobook can be purchased exclusively from Papaveria for the outrageously low cost of £1.69 — that’s approximately $2.99 for our American friends.

To celebrate the release of the audio, Papaveria Press has also made the paperback more widely available. You can now purchase Jack at Amazon.com for $9.99 — or just 99 cents for the Kindle version!

Papaveria Press promises to get the audio version of the second half of Jack o’ the Hills, “Oubliette’s Egg,” produced soon.

You are a LEETLE LUVCUFF is what you are, Robot Overlord of the World!!! Thank you so much!

Yeah — I just heard the rough cut of the song “Princess” which will be interspersed at each chapter’s end of “Oubliette’s Egg” the way the song “Master Jack” is interspersed through “Stone Shoes.”

I did the lyrics and my brother did the music, and he and author CAITLYN PAXSON will be singing “Princess” together as it’s sort of a… call and response. Heh heh heh.

1.) Princess, Princess
See that man
Riding forth to win your hand
Own your love and own your land
Plant his seed down in your sand

Lover thin or lover thick
Tie him to that hick’ry stick
Break him slowly, kill him quick
Princess got a bone to pick

You are most welcome, C.S.E!

Really, the only way to truly appreciate JACK ‘O THE HILLS is to hear you read it. I’m very glad Western Civilization has not been deprived of one of its modern pinnacles. Kudos to Papaveria Press for bringing it out.

Jeremy Cooney and CAITLYN PAXSON, huh? That’s a lot of oral story-telling talent on one disk. Can’t wait to hear it!

Black Gate » Blog Archive » C.S.E. Cooney’s How to Flirt in Faerieland & Other Wild Rhymes On Sale

[…] last piece of C.S.E. Cooney news was the release of Jack o’ the Hills audiobook, her interview with Aesthetically Speaking, and that time when she won Rhysling Award for her […]