Back in May, more or less on a whim, I paid $6.59 for a copy of the British paperback edition of Nebula Winners Fourteen, edited by Frederik Pohl. I already had the Bantam version (see below) but the gorgeously moody cover by the great Bruce Pennington hypnotized me, and what could I do?

I’m glad I did it, anyway. In this hot Illinois summer, a book I can dip into while relaxing on the porch is a perfect antidote, and having Nebula Winners Fourteen conveniently on hand has reminded me just how outstanding the Nebula anthologies were, and are, year after year. This one, for example, includes the three 1978 Nebula short fiction award winners, plus a 30-page excerpt from the winning novel:

But it also includes some superb nominees, as selected by Pohl, including C. J. Cherryh’s Hugo Award-winning short story “Cassandra,” and Gene Wolfe’s massive 60-page novella “Seven American Nights.” I imagine Pohl got a lot of grief for cramming two long novellas into a slender paperback, displacing a lot of award-nominated short fiction in the process, but the years have proven the astuteness of his choice. “Seven American Nights” is one of the most acclaimed stories of the 70s, still discussed and enjoyed today, whereas the winner in the novella category, Varley’s “The Persistence of Vision,” is considered by many to be overrated (including by me.) 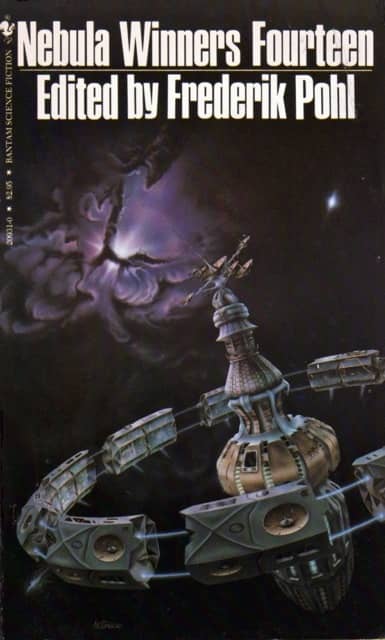 Nebula Winners Fourteen also contains four non-fiction pieces, including an intro from Pohl (“A Guide for the Perplexed”), a look back at the SF of 1938 from Isaac Asimov, Norman Spinrad’s “The Future of Science Fiction,” and new Grand Master L. Sprague de Camp’s reprinted speech “Little Green Men from Afar.” 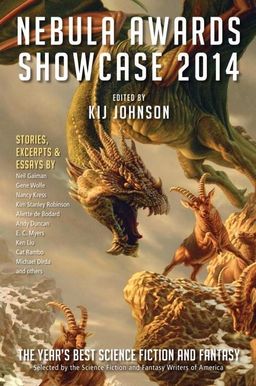 Our previous coverage of the Nebula anthologies includes:

Nebula Awards Fourteen was published in hardcover in August 1980 by Harper & Row, and reprinted in paperback in the UK by Star in March 1982, and in the US by Bantam Books in July 1982. The Star edition is 259 pages, priced at £1.75. The cover is by Bruce Pennington.

Is this the longest running SF/fantasy series ever? Surely it must be. I’ve read the first nine, and hope to get a lot further. Nice to see my edition (the UK one) get the headline treatment. The US paperback looks pretty moody as well!

I think the longest running SF/fantasy series is the German language Perry Rhodan (which introduced me to SF, some 40 years ago).

The Nebula volumes are, I believe, the longest running English language anthology series in the genre. They’re currently published by Pyr, who’s doing a fine job.

“Seven American Nights” is just in there to emphasize to SFWA members their lack of taste in preferring Varley’s overrated “Persistence of Vision”.

“The Persistence of Vision” also won the Hugo that year, so fans as well as writers were taken by it. I remember enjoying it when I read it in the collection of the same name.

Of the stories in this collection, I liked “Stone” by Ed Bryant the best.

[…] example in 1980, for Nebula Winners Fourteen, Frederik Pohl jettisoned virtually every single short fiction nominee (and all the novelettes) so […]