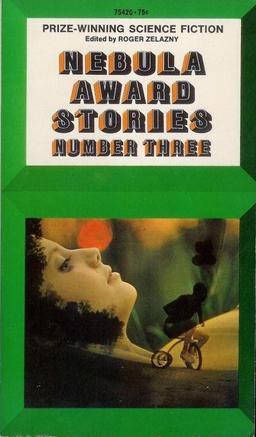 It looks like there were 16 works of shorter fiction nominated for the 1968 Nebula awards. Seven of them appear in this collection. Although the Ballard story included doesn’t appear on the ballots I found listed at various reference sites.

In any event, there are some holes in my reading history represented here. I’ve read lots of Ellison over the years and a fair amount of Ballard. As for Leiber, Moorcock, McCaffrey and Delany, not so much. But there’s some great stuff here, by my reckoning, and a few good ones and one that was not so much.

“The Cloud-Sculptors of Coral D,” by J. G. Ballard

As the title suggests, actual cloud sculptors are sculpting clouds in this one. At first they do it for small change and later for a wealthy and not-so-nice woman. Things fall apart at this point, in rather spectacular fashion.

Last things first. Leiber’s story has one of the best last lines I’ve read for a long time. And the story that precedes it isn’t half bad either. It’s actually quite good and deserving of an award. You could go wrong in so many ways when writing a story that’s just a play-by-play rendition of an unearthly craps game. But Leiber carries it off well.

I haven’t read much McCaffrey and none of her Dragonriders books, that I can recall. No surprise, since I lean more toward SF than fantasy. But I was pleasantly surprised by this novella that was later incorporated into the first Dragonriders novel. It’s a fairly simple premise — Dragonriders take on a ruthless tyrant — but McCaffrey handles it skillfully and turns it into a real page turner. If I can find the reading time for it, I might even check out the first novel. 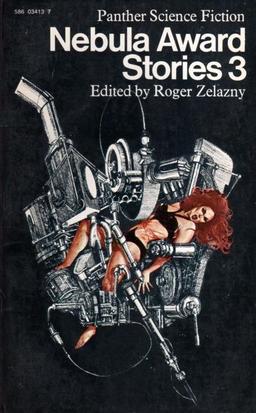 At the heart of it, the premise for this novelette is about as lame as you can get. It might pass muster for a fourth-rate horror film, but I wouldn’t count on it. It’s a measure of Ellison’s skill as a fiction writer that he was able to take such a dopey premise and make it into something worth reading and nominating for a Nebula.

“Mirror of Ice,” by Gary Wright

A stripped-down, action-packed yarn here. It’s a look at a pumped-up futuristic version of luge or bobsled racing where the body count is high. We follow the protagonist — who seems to be losing his nerve — through one harrowing race. It made for entertaining reading but I don’t know if I’d rank it as a potential award winner.

“Behold the Man,” by Michael Moorcock

I’m lukewarm on this one but since I don’t have a corresponding category and since I was on the high side of lukewarm I’ll put it here in Thumbs Up. It’s a time travel story about a modern chap who takes over for Jesus, all the way up to that unpleasantness at Golgotha.

If I had to choose between the Ballard story, which was nominated for the Nebula (or not — see above), and this one, which won it, I’d go with the former. It’s an interesting premise — spacefarers are exploited (and exploit) as a side effect of some genetic modifications that allow them to go to space. It just didn’t do much for me.

William I. Lengeman III’s last review for us was the 1966 anthology Beyond Belief. He holds forth at www.wileng3.com

Many good stories in this one. Just a note: McCaffrey’s Pern books are science fiction, not fantasy. They arrive on a ship, they use powered sleds, they use biology cloning science to breed the dragons, etc. In this case, dragons do not mean Fantasy.

That’s a really incredible list of stories, all in one slender volume.

These early Nebula Awards volumes are packed with some of the best SF ever written.

The Ballard story is part of his collection Vermilion Sands that features the titular resort, its unusual artists, and their louche patrons.

One other reason to be kind to the oft-irked Mr. Ellison is having “Gonna Roll the Bones” and “Aye, and Gomorrah” both appear first in his Dangerous Visions anthology. Of course, that and the subsequent volume Again, Dangerous Visions were harbingers of the sf New Wave that put literary quality into genre stories, a development that is still being questioned as I type.

To nitpick, DV and A,DV were not “harbingers” of the New Wave — they were, perhaps, exemplars, and latish ones. “harbingers” were things like Ballard’s early ’60s stories.

“Aye, and Gomorrah” is a great story that admittedly took me a couple of readings to fully grok. (Spread over a few years.) I love “Cloud Sculptors” and I wouldn’t have hated it winnning a Nebula, but I prefer “Aye, and Gomorrah”.

Please excuse my parochialism; I should have say “harbingers of the American sf New Wave”, acknowledging Moorcock, Aldiss, Ballard, and Disch’s prior work in New Worlds magazine.

And, of course, to nitpick back, since the Moorcock New Worlds period begins in 1964, and Dangerous Visions is published in 1967, it is hard to see it as “latish”. USan awareness of the New Wave is often pegged to the work of Judith Merril, like her anthology England Swings SF, published in 1968.