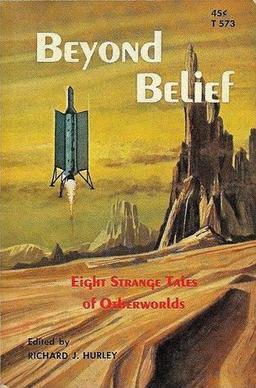 Given that Scholastic was the publisher of this anthology, it’s probably fair to assume that it was aimed at what was once called the juvenile demographic. I was in that demographic when the 1973 paperback edition was published.

However, as the publishing credits reveal, most of the stories are drawn from SF magazines of prior decades. None of which were geared to juveniles, as far as I’m aware. It’s a mixed bag, as anthologies often are, but for me the ups outweighed the downs by a bit.

When you’re listing writers who have a truly distinctive voice, Clark Ashton Smith should probably be near the top. I wasn’t aware that he wrote much science fiction, but this story of humans living on a cold Earth and striving to restart the sun fits the bill. The best story in the book, for me, and one of the best I’ve read for a long time.

“It’s Such a Beautiful Day,” by Isaac Asimov

An interesting effort from Asimov, set far enough in the future that no one goes outside anymore, instead getting from point A to B by using Doors. Any resemblance to transporters is coincidental, since Star Trek came along more than a decade after this story was published. The hook is that one day a young boy decides that he’d rather get around by using old-fashioned doors to go outside and walk from place to place. Naturally, his well-bred, high-toned mother is aghast over this turn of events.

“The Invasion,” by Robert Willey

It’s not rocket science, in the strictest sense of the word. But this story is by a rocket scientist — Willy Ley writing as Robert Willey. His story is a curious one about an invasion, as the title suggests. Three ships come and siphon off power from a power station and partially bury themselves nearby. They don’t hesitate to defend themselves from perceived threats but they are not particularly aggressive either. The most interesting part of the story for me was that the aliens’ motives are rather opaque to the people of Earth. Who ultimately rise up and take actions that are fairly typical of Fifties SF.

Quite some time before actual humans landed on the moon, Leinster penned this story of men landing on the moon and behaving badly toward the native life forms. They are somewhat unfathomable and it falls to a researcher to gradually begin fathoming them, finally coming to the realization that bumping them off is a bad idea, even if you put aside the obvious ethical concerns.

In which Venusians (yep, Venusians) determine to figure out our defunct Earth civilization (thanks, Ice Age) by intensive study of a certain artifact. It wasn’t hard to figure out where this one was going but the ending was so whimsical that I had to laugh. I suspect that was part of the intended effect, along with underlining the difficulty of understanding other culture just by examining a few stray artifacts.

“The Hard Bargain,” by Evelyn Smith

This tale of horse trading with an alien in a post-nuclear future didn’t work for me for a few reasons. Such as, why the aliens would place any value on the artistic masterworks of Earth. Or the twist ending which seeks to provide an science fictional explanation for the Pied Piper of Hamelin. Kind of a groaner, I’d go so far as to say.

“The Man Who Lost the Sea,” by Theodore Sturgeon

I’m probably in the minority with this one (though some claim that Sturgeon himself didn’t like it much). I stuck it out to the end and it was worth the wait, as it turns out. But the arty-farty execution didn’t do much for me and outweighed the merits of the clever ending. It’s hard to give many more details about this one without ruining it so I’ll leave it at that.

“Third from the Sun,” by Richard Matheson

I suspect that the fame of this story, which first appeared in Galaxy in 1950, stems from the fact that it was adapted by Rod Serling for a Twilight Zone episode. I’ve seen most of those episodes but it doesn’t stand out in my memory. As for the story, it relies on a twist that might have been considered pretty decent way back when, but feels kind of ho-hum now nowadays.

I tried to comment on this piece before, but must have muffed the sending somehow.

Anyway — this was a timely posting for me, because just the other day I remembered that, probably more than 40 years ago, I’d seen this book at a cousin’s house. I may have tried to persuade him to sell it to me. I remembered the cover vaguely, that there was a Smith story in it, and that it was published by an outfit that aimed at young readers — I may have thought it terms of “Tab Books” rather than “Scholastic Books.” I thought I should be able to track it down. You’ve saved me that trouble, and I’ve ordered a copy.

Excellent! Nothing quite warms our hearts like a tale of rediscovered love for favorite old books. Or books you always wanted, and never had.

Or any tale about old books, really. We’re not picky.

Yes — I didn’t even remember the book’s title, after all these years. But the book you featured here certainly is the one I had in mind.

The late Russell Kirk owned, he said, a book, I think he meant a manuscript book, of True Narratives of ghosts from which he would sometimes read to guests, but, he said, these were too slight to publish.

That would probably be the way of it, with many stories book-hounds might tell. Otherwise a book of bookish anecdotes by longtime sf and fantasy readers could be a fun thing to read.

You can find a very little online about the Bartlett Street Book Store in Medford, Oregon — gone for some years now. I used to visit it quite often in the mid-1970s. It seems on one occasion I headed for it hoping for an Arkham House book, and what did I find but a used and affordable copy of HPL’s Selected Letters I? It’s not as if the place had been a site for AH books, in which I was more interested then than now; there was no reason to expect any.

That’s not really enough of a story that making up a book of such anecdotes would be worthwhile, but I suppose many readers have such memories. Here’s another, though not of an sf/fantasy book. I’d been wanting to get hold of Nikolai Leskkov’s Cathedral Folk, it seems. I was visiting a town in Oregon and it “happened” that an octet from new York’s St. Vladimir’s Seminary was in concert at the little Episcopal church. It was a very warm evening, the church wasn’t air-conditioned I fear, and the men sang in full-length black hassocks. They were excellent. Afterwards there was a book table of volumes relating to Eastern Orthodoxy, etc. (and that was interesting in itself), and there was the Aksakov. Unless I’m getting muddled and it was Sergei Aksakov’s A Russian Gentleman that I was hoping for; and it turned up in a downtown bookstore….

I remember this book! I am sure that (somewhere) I have a copy. I can remember the stories. But where is it hiding?
And “Phoenix” by CAS! I ran across the film “Sunshine” (2007), and I thought, “Hey, I know this story. But where, where?” Here it is!
And I heard a reading of “The Man Who Lost the Sea”, and it worked for me as a tale told aloud. Maybe it sits too still upon the printed page.