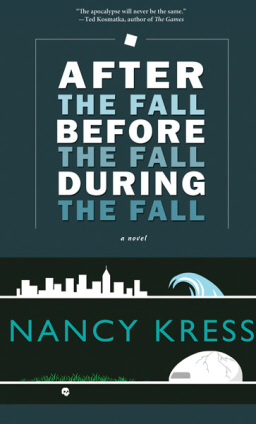 This is a chronic problem. I think the guidelines should be changed to allow voters to select a specific title, “No Award,” or “Wait, wait, I haven’t read any of the nominees yet!”

Until that happy day, we continue to report on tantalizing books and short stories that we haven’t personally enjoyed yet. It’s a curse.

The 2012 Nebula Awards were presented Saturday, May 18, 2013 at SFWA’s 48th Annual Nebula Awards Weekend San Jose, California. The winners were:

After the Fall, Before the Fall, During the Fall, Nancy Kress (Tachyon)

Beasts of the Southern Wild

As we reported back in December, Gene Wolfe was honored with the 2012 Damon Knight Grand Master Award for his lifetime contributions and achievements in the field.

Carl Sagan and Ginjer Buchanan were given Solstice Awards. Michael H. Payne received the Service Award, now named the Kevin O’Donnell Jr. Service to SFWA Award, in honor of Kevin O’Donnell, past chairman of the Nebula Award Novel Jury and 2005 Service Award winner, who passed away in November.

The nominations for the 2012 Nebula Award were announced in February, and we reported on last year’s winners here.

Congratulations to all the winners! We know your novels and stories were great, and we hope to get to them soon.

Always glad to see Nancy Kress, a very long-time favorite win, even if it is with something I too haven’t read yet. 😉

I’ve only read one Kim Stanley Robinson book, “The Years of Rice and Salt”, but I do plan to read more. I’ve never been sure why alternate history stories fall into the science fiction category (or in “The Years…” case, more accurately fantasy). That said, it was an enjoyable read, though nowhere near what anyone would call exciting. It is decidedly literary, and a lot of the time feels like an “eat your vegetables” sort of read.

[…] Nebula Awards Showcase 2014, on sale today, answers those questions. It collects the Nebula Award winning short fiction from last year, including an excerpt from Kim Stanley Robinson’s novel 2312, the 110-page novella “After the Fall, Before the Fall, During the Fall” by Nancy Kress, “Christmas Inn” by new Grand Master Gene Wolfe, “Close Encounters” by Andy Duncan, and ”Immersion” by Aliette de Boudard. It also includes two additional nominees, ”The Bookmaking Habits of Select Species,” by Ken Liu, and Cat Rambo’s “Five Ways to Fall in Love on Planet Porcelain.” There are also two appreciations of Gene Wolfe by Neil Gaiman and Michael Dirda, as well as several poems. (Read the complete list of 2014 Nebula Award winners here). […]