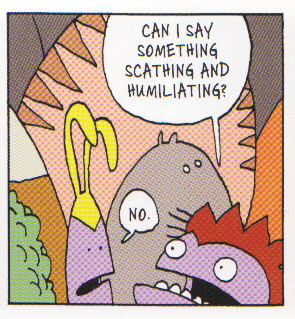 I’ve been a fan of French cartoonist Lewis Trondheim since I first read the marvelous Dungeon (co-created with Joann Sfar) over a decade ago. His comics are bizarre, funny, and fabulously creative.

So I didn’t mind taking a chance on a new Trondheim comic collection: Kaput and Zösky, an 80-page graphic novel collecting over a dozen tales (especially since I found it remaindered on Amazon for $5.58).

Kaput and Zösky are two determined galactic conquerors, traveling from planet to planet in a tiny spaceship, constantly dreaming of ways to bring the next planet to its knees. Their abilities don’t quite match their dreams, however, and most strips end with them hightailing it off-planet, usually escaping death by inches.

The art in Kaput and Zösky is by Eric Cartier, and it was the high point of the comic for me. Cartier’s cartoony aliens are expressive and frequently very funny, and he captures Kaput and Zösky’s goofy schemes brilliantly. I suspect the strips may work better standalone than bundled together, as they got a little repetitive after a while.

Fortunately, the adventures of Kaput and Zösky aren’t limited to the page. Kaput and Zösky: The Ultimate Obliterators, a Nicktoons cartoon broadcast in 2003, captures the charm of Cartier’s artwork, and the Canadian voice cast does an excellent job of bringing the two bloodthirsty aliens to life. A total of 26 half-hour episodes (78 shorts) were produced, many of which have found their way to YouTube. Check out Kaput & Zosky in “The Planet Pax,” a complete 8-minute episode:

Kaput and Zösky was published in April 2008 by First Second. It is 80 pages in color, with text translated from the French by Edward Gauvin.