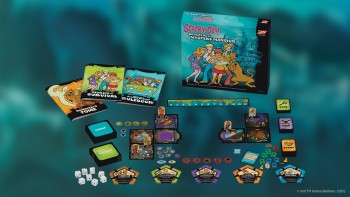 Originally published in 2004, Betrayal at House on the Hill continues to be one of my favorite games. I have reviewed the original game before, but there’s a new variant that’s just been released, aimed at a younger audience. While I wouldn’t say it surpasses the previous iterations of Betrayal, it definitely has a lot to offer on its own merits, particularly if you’re looking to get young gamers into a game that has more layers of complexity.

In Betrayal at Mystery Mansion (Amazon), you are playing 3 to 5 members of the Mystery Incorporated gang from Scooby Doo!, searching through a seemingly-haunted mansion and the surrounding grounds. You can explore inside and outside of Mystery Mansion, and eventually stumble upon the big bad Monster, often along with an assortment of minions to carry out its nefarious plots. There are, as in the original game, a variety of monsters and scenarios that play out, but it’s definitely much more streamlined than in the original game.

One major difference from the original is that when the Haunt is triggered, players get to choose who will play the role of the Monster. One of the only ways that Betrayal at House on the Hill can go south, from what I’ve seen, is if the “wrong person” is randomly assigned as the Betrayer.  If you’re playing with a casual gamer, in particular, it is possible that they don’t really understand what they’re supposed to be doing when they read their portion of the Haunt scenario, or maybe they’re just not very strategic in how they utilize their powers and abilities. This variant approach gives you the option to make sure that the person in the role of the betrayer actually wants to be put in that position.

That having been said, if you’re playing this with a group of kids (and it is designed for age 8+), you also have to think about whether there will be a dispute over who gets to be the Monster, and possibly a dispute by the very people who might not be best qualified to fill that role. It may be useful to determine at the start of the game who is going to be the Monster, just so the table doesn’t erupt into a fight at the climactic moment. (If you have no idea what I’m talking about, you either have no kids or are better at parenting than I am.)

The booklets are designed so that it is possible for everyone to learn about the betrayal together, so if you do have a younger player who wants to be the Monster, most of the rules for both groups can be read by everyone, to minimize confusion. There are a couple of “Private” sections in the Monster book, that explain “what’s really going on,” and those can wait to be revealed until the Scooby team have successfully defeated the Monster (or the Monster has defeated them).

One of the big thematic elements of this version of the game is that players can obtain Scooby Snacks, which allow them to re-roll a die on their rolls. Each player, representing the five members of Mystery Incorporated, with a variety of stats: Speed, Might, Courage, and Brains. In addition to their different stats, each has a special ability. Scooby always gets to move an extra tile worth of movement. Shaggy gets to re-roll 2 dice (instead of 1) when he eats a Scooby Snack. Fred starts with an item card. Daphne starts with and can carry more Scooby Snacks than anyone else. Velma can never roll lower than a 3 on rolls for her Brains statistic.

The Monster scenarios really feel like classic episodes of Scooby Doo, complete with charmingly overly-contrived villainous plots that feel like they’re straight out of my childhood. (Really? You thought that was the best way to hide your counterfeit money operation?)

Incidentally, is worth noting that thematically none of the characters are “betrayers” of the group, but narratively the Monster’s character gets separated from the group and lost, right as the Monster attacks. As someone who is perhaps over-concerned with the narrative quality of my board games, this was a delightfully important aspect to me. When you’re playing Shaggy and become the Monster, you just say that Shaggy stumbled into the kitchen for a few turns. 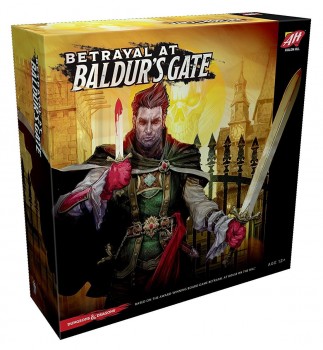 This also isn’t the first time that Wizards of the Coast has re-skinned the 2004 Betrayal at House on the Hill to leverage a valuable intellectual property for a new take on the concept. The 2017 release of Betrayal at Baldur’s Gate (Amazon) used the same basic betrayal mechanic, but instead of exploring a haunted house, a group of fantasy adventurers are exploring the streets, buildings, and catacombs of the iconic Forgotten Realms city of Dungeons & Dragons, until they end up in a fight against some classic D&D monstrous villain. (Beholder, anyone?)

For those interested in the original game, it is still available (at Amazon or elsewhere), and if you already own it, there’s the Widow’s Walk expansion (Amazon), which adds a new Haunt set, cards, room tiles, and tokens for the related Haunts. While there are a number of new room tiles, it also includes a new “Roof” level to the game.

If you don’t own the original Betrayal at House on the Hill, but feel that you have a fairly consistent gaming group (such as, perhaps, a household full of family members whose social engagements have all been cancelled due to concern about social distancing), then there’s also Betrayal Legacy (Amazon). In this legacy-style game for 3 to 5 players, you begin hundreds of years in the past, playing as members of families who have been tied to the house since it’s original founding. As you continue through the game, the house and surrounding grounds grow more complex, more room options and cards are added to the game, and some suffer permanent changes, in the form of rules that are placed on tiles by stickers when certain events are triggered. For an example of how this plays out (but hopefully without giving too much away), when you discover a new artifact, there are options to make that artifact a family heirloom, so it grants extra benefits to members of one family, if it is discovered in a later game by descendants of that family line. My family is still playing through this (jumping, as we are, between various standalone games, two other legacy games, and a Pathfinder adventure path … I do really have a problem), but we’ve really enjoyed every one that we’ve played … and once the entire campaign is completed, the game can still be played as a stand-alone version of Betrayal, with game elements that have been customized by your own unique campaign backstory.

I really can’t heap enough praise on Betrayal Legacy. This is a game that, when we reached the climactic moment of the first game, I literally stood up and cheered at the brilliant plot twist they designed into the game. I will say nothing more about it, other than that you’ll need to play through at least the first scenario to find out more.

But if you’re playing with some younger gamers, and are looking for an on-road game for some more serious mechanics while still having a very accessible feel, while still being incredibly enjoyable for the older players, Betrayal at Mystery Mansion is definitely a solid recommendation.