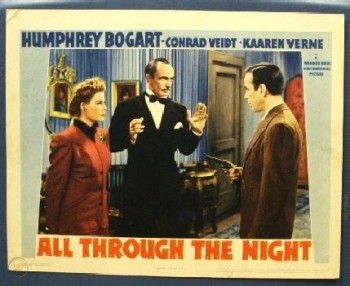 Today it’s a look at All Through the Night – one of my five favorite Bogie films, but not one that makes too many Top 10 lists. In 1940, Bogart’s career really started its climb, with They Drive By Night (Ida Lupino was fantastic!) followed by High Sierra (same comment). The forgettable The Wagons Roll at Night was up next, and then it was The Maltese Falcon. That was three very good movies out of four. And after The Falcon was All Through the Night. I think it kept his streak going, but that’s not the general perception.

Picking Iron (Trivia) – Lupino and Bogart had not gotten along well during They Drive By Night, and she didn’t want to work with him any more (though she did in High Sierra). He was originally cast as the lead in Out of the Fog, but she balked and he was replaced by John Garfield. Bogart complained to Harry Warner about Lupino’s action, to no avail. Much later, Lupino and Bogart said they got along fine.

In 1941, Hollywood was starting the transition from gangster flicks to war movies. One approach was to have the gangsters fight the new bad guys. And this movie is a gangster/espionage comedy. I think it’s great. This essay takes a different approach to movie reviews, taking advantage of the excellent cast.

The Maltese Falcon was a rocket strapped to Bogart’s career, after a long run of B-movie leads, and being the crook gunned down by James Cagney or Edward G. Robinson. In this one, he’s Gloves Donahue, a self-titled promoter who is a mobster in New York City. He seems to primarily be a gambler. When the baker of his favorite cheesecakes is found murdered, it leads Donahue to a group of Nazis plotting to blow up a ship in the NYC harbor.

Bogart is a likable tough guy – not like his role in Dead End, Bullets or Ballots (one of my Top 10), or The Roaring Twenties. Circumstances make it appear he murdered a rival, and he’s working to solve the murder, which draws him deeper and deeper into the Nazi plot. I think he plays the part well.

We would see Veidt a few years later as Major Strasser in Casablanca. Here he is Ebbing, leader of a Nazi spy ring in NYC. He’s smooth and snake-like. I enjoy the scene where he is an auctioneer and Donahue is bidding. It’s the typical role for the situation: respectable on the surface, conniving Nazi underneath.

Picking Iron – In Casablanca, Rick advises Strasser that there were certain parts of NYC that he wouldn’t recommend invading. That’s an in-joke to this movie.

Picking Iron– Veidt fled Germany with his Jewish wife. In Hollywood, he refused to play a part in which a Nazi was sympathetic. 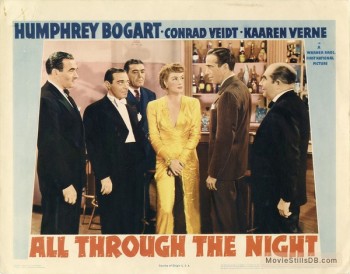 The German Verne also fled from the Nazis, with her husband. She met Peter Lorre during the filming of this movie, and she divorced her husband to marry him. She put her career on hold for the stormy marriage, with suicide attempts, and they divorced in seven years. The window of opportunity had passed. She died suddenly, and mysteriously, in 1967. She had the female lead opposite Basil Rathbone in Sherlock Holmes and the Secret Weapon.

She’s Leda Hamilton and she visits Miller’s bakery while Donahue is there and flees when she finds out he’s dead. Donahue finds out that she is a singer in Barton MacLane’s nightclub and tracks her down there. Peter Lorre, who we saw kill Miller in a fine menacing performance, is her tuxedo-clad piano player. Verne seems to be with the Nazis, but you know how that will go.

I’m not much of a Verne fan. I don’t think she does much as the lead. Other than the Holmes film, I’ve never watched her in anything else.

With 173 credited parts, McHugh was a classic character actor – and his character often provided comic relief. He plays Barney, Gloves’ driver. He’s crazy about Jean Ames, named Annabelle. He constantly wants to spend time with her, and even marries her, but Donahue always needs him for work. McHugh is funny and always livens up his scenes. He’s got some good lines, too. He provided almost all of the comedy in Bullets or Ballots.

Lorre really is great in his first scene, collecting spy information from Miller at his bakery. He goes from amiable to lethal and it’s a treat to watch. He kills Joe (Edward Brophy) more-or-less the head bouncer at the night club, and spends the rest of the movie as Ebbing’s henchman. His role wanes over the course of the movie, but he is well cast as Pepi.

Best known as Uncle Charlie in My Three Sons, he is Donahue’s right-hand man. He is in a lot of scenes and has a major part. He’s a tough guy who makes a lot of wise-cracks. His double-talk in the secret meeting is amusing. He does a pretty good job in this movie. 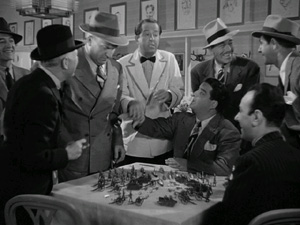 Only 26, he plays gang member Starchy. Earlier in the year, he had appeared a very young-looking soda jerk in Edward G. Robinson’s Larceny, Inc (A Night Before Christmas). He gets a few scenes, including some war double talk in the opening scene.

Silvers plays a near-sighted waiter at Donahue’s favorite restaurant. He’s got the funny role in the opening scene, but doesn’t have much of a part after that.

My favorite supporting actor in Warners’ gangster flicks. He plays Marty Callahan, and he runs the club that Leda sings at. He also has a gang and is in competition with Donahue. His exasperation as Donahue’s mother hassles him in the club is funny. MacLane is always good in anything he does, and he plays his part well, joining forces with Donahue to take on the Nazis at the end.

Another actor who appeared in a LOT of films, he often got bigger parts than some of the other supporting actors from the gangster era. I think he would have made a fantastic Uncle Fester in the Addams Family.

He plays Joe, Callahan’s primary muscle. He tries to intimidate Donahue but ends up the fool. Pepi kills him in the back of the club, setting things in motion. I like Brophy.

Playing Donahue’s mother, she appeared in some big films, including Mary Poppins, The Grapes of Wrath, and Gone With The Wind. She is a busybody who Donahue tries to appease. The gang complains about her constantly messing up their activities by calling Donahue. He has to tell her to let the widow Miller answer for herself because she keeps taking over the conversation. 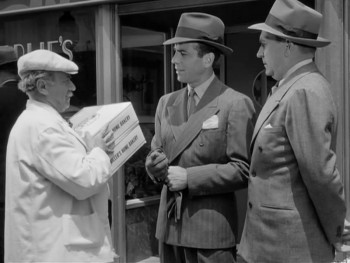 Miller the baker is prominent at film’s start, but makes an early exit. He lends a hand in one last appearance. He had a short but memorable scene in Casablanca. He was part of the couple that were friends with Karl the waiter, and heading to America. He appeared (briefly) in Larceny, Inc., with Gleason, Brophy, Jean Ames (Annabelle), and Chester Clute (Hotel Clerk)

Hopper has an uncredited appearance as a reporter. He’s not even noticeable. But I thought him worth mentioning because he went on to play Paul Drake to Raymond Burr’s Perry Mason.

That is one deep cast!

There’s plenty of action, shootouts, comedy, spy stuff, the big roundup, and the final espionage attack. This is a heck of a movie.

This movie is one spot above the fantastic Treasure of the Sierra Madre for me (and I think that’s a terrific film). It deserves more recognition than it gets. It seems to have gotten lost between The Maltese Falcon and Casablanca, which came out later in the same year as All Through the Night. 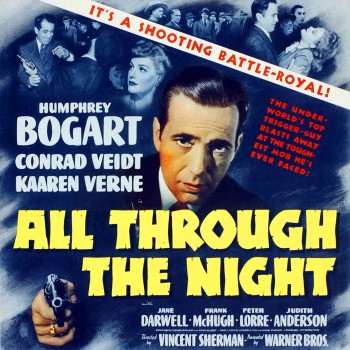 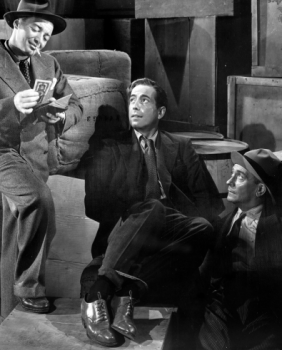 A rewatch of The Caine Mutiny over the weekend pushed that movie back into third place on my Bogart list. All Through the NIght is fourth. I enjoy it that much.

I always enjoy Barton MacLane. (George Tobias too, though he isn’t in this one.) I sometimes think that if I could keep the films of only one studio, I would have to go with Warners, largely because of their great stable of character actors. (Also, I just can’t live without Bette Davis.)

It’s not the most lighthearted, enjoyable movie in the the world, but I think Bogart gave his best performance in In a Lonely Place. People who think the great stars of the the studio era weren’t great actors are nuts.

I always stop and watch MacLane. Even Torchy Blane, where they turned Frederick Nebel’s character into a woman (and made the main character a supporting one).

I just watched Davis’ in Three on A Match, and The Petrified Forest, as part of my Bogart run. I admit, I’m not a huge fan of hers. Those bug eyes weird me out.

I’m not nearly as keen on In a Lonely Place as most folks. But I’m not crazy about noir, which is depressing. I prefer hardboiled. But I’ll watch him in anything.

I really enjoy this movie; it’s on my “always rewatch” list. But I confess I wouldn’t put it on my top 5 Bogie movies. The “double-talk” bits didn’t seem as amusing to me as they must have to the writers. I like the idealistic vision of gangsters siding with the rest of America against the Nazis (cf. Sherlock Holmes and the Voice of Terror, where the Underworld helps save Britain during the Blitz). But as I get fatter and balder and more cynical I find it less convincing.

Still, Conrad Veidt is wonderfully menacing, and Peter Lorre has some great moments, too. And it is fun to watch Bogart get to play a role with some humor and magnanimity to it.

I’m working on a Black Gate post of my dozen favorite Bogie movies. This one obviously features prominently.

I just like the story, the comedy, the deep cast (his gang is great in their scenes), the cheesecake stuff – just a really good Bogart movie.

A rewatch of the Caine Mutiny last week jumped it up above this one, but this is still Top Five. Which is a pretty tough category when you’re talking about Bogie.

There’s another one where we differ. Whenever I think of watching that, I put on Across the Pacific instead. It’s just so ponderous.

I felt like it tried to capture some of the Casablanca magic, and failed. I should watch that again, though. It’s been well over ten years.

Great choice. And agreed that this ridiculously fun film deserves to find its way to a broader audience. It also needs to be released on Blu ray.