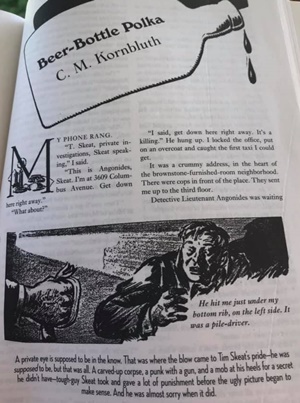 Steven H Silver and I shared office space in the dungeon…cellar…basement….journalist’s suite (yeah, that’s it) at the Black Gate World Headquarters. Then, Steven published his cool new novel, After Hastings, and got moved above ground level. He tapped out a message to me on the pipes and said that it has taken a while for his eyes to get used to all that natural light. But before he moved on up, we worked on the joint post you are now reading. I look at a hardboiled PI story by C. M. Kornbluth. Then Steven follows with one of the author’s science fiction stories. Kornbluth wrote a lot more of the latter, than the former. So, read on from the pride of the BG World Headquarters underground offices!

C.M. Kornbluth started to emerge as a science fiction star, then went off and earned a Bronze Star for service in The Battle of the Bulge. He resumed his writing career and died at the young age of thirty-four. Primarily in the late forties, he wrote sixteen mystery stories for the pulps. Two of those appeared in Black Mask in 1946. “Beer-Bottle Polka” introduced tough PI Tim Skeat in the September issue, and he made a return appearance in November with “The Brooklyn Eye.” All of his other mystery stories were one-offs, without a recurring character.

Skeat gets a phone call from Detective Lieutenant Angonides, telling him to come to the crime scene, where a dead body has been found. The stiff had been tied to a bed and seriously tortured with a broken beer bottle. It ain’t pretty. One of Skeats’ business cards had been found in the deceased’s hat band, prompting the call. Skeat tells him the man was a nut who visited his office, tried to sell him a secret, and was sent packing.

Angonides doesn’t like that answer. He has Skeat taken down to the station. And when he still doesn’t like that answer, down into the basement. First he sweats Skeat with a hot spotlight. And when that doesn’t work, he punches him over and over, right below a rib. Then moves about six inches to the side and repeats the process. Skeat isn’t a suspect in the killing. Angonides is just convinced he knows more than he’s telling. So he works him over. Skeat doesn’t change his story and is beaten into unconsciousness. And told not to bother filing a complaint. He takes his undeserved beating and heads to a Turkish bath for treatment, and falls asleep there.

Angodines is a one dimensional character. He’s just a jackass cop with the rank to abuse his power. He doesn’t even have any memorable lines. Steak is the star, of course, but a little depth wouldn’t have hurt. Norbert Davis populates each of his five Max Latin stories with a host of memorable characters.

The typical young punk with a gun visits him in his office, but Skeat gets the better of him and lectures him for falling for the old, ‘the safety is on’ trick. The police take the gunsel (yep, that term is used. If that doesn’t mean anything to you, google it and learn something about the great Dashiell Hammett). Skeat fools the man’s confederate when he calls and the clueless crook comes to crack Skeat’s safe. And in a neat turn, Skeat uses the exact same method of beating out a confession, which Angonides used on him. That is clever writing.

We learn that the beer-bottle dead man had learned a secret about a local club owner named Morgan. And he was killed for it. Word got around that when he visited Skeat, he told the detective the secret. So Morgan ordered Skeat killed, and any incriminating documents in his safe, destroyed.

Skeat goes to confront Morgan and, using his observational skills, deduces the secret in a one-on-one encounter. Morgan actually comes across as a not-all-bad guy; except, he has no compunctions about killing to keep his secret. Skeat kills him in a shootout. But first, we learn he has a brother who is a straight-arrow, while he’s a lifelong crook. If anyone realized they were related, it would ruin his brother’s career. Bear in mind, this was seventy-four years ago, when that kind of thing mattered more.

You might have guessed by now, but we get the reveal at the end. His brother is Angonides, who laments his sibling’s death. And Skeat drops a line he had used back when Angodines was going to beat him.

This is far from the best story in The Black Lizard Big Book of Black Mask Stories, but it’s worth a read. Aside from Morgan, there’s not much to the story, except following along with Skeat. Which isn’t that bad, but I like more to a short story. I get Morgan killing the blackmailer, but going after Skeat seemed a bit premature. And cold-blooded. And with the beating in the police station, Angonides doesn’t seem like that good a guy, either.

Steven, take it away – off world!

About six years before Kornbluth published “The Brooklyn Eye,” author S. D. Gottesman published the story “King Cole of Pluto” in the May issue of Super Science Stories. Gottesman had a close relationship with Kornbluth in that it was one of several pseudonyms Kornbluth also used. A month earlier, using the pseudonym Ivar Towers, Kornbluth had published “Stepsons of Mars,” a collaboration with Richard Wilson and Dirk Wylie, which was published under the name Ivar Towers. “King Cole of Pluto,” however, was his first professional solo appearance. 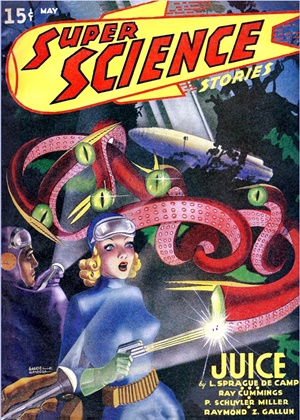 Adopting many of the tropes of classic space opera, Leigh Salvage, Incorporated clears the spaceways throughout a solar system in which each planet has been settled by humans. His crew is a ragtag collection of the dregs of the system that celebrates a successful job by drinking themselves into a stupor before returning to their home base on Mars, where they continue to carouse.

Leigh is not a particularly admirable character. Upon arriving at his home field on Mars, his first activity is to gloat about his good fortunate to other salvage jockeys which is only waylaid by his discovery that one of them has died and his daughter has not only inherited his business, but she refuses to sell it to him and plans on running it on her own, giving Kornbluth the opportunity to demonstrate Leigh’s firmly entrenched misogyny.

One aspect of space opera is that notion that whatever job the main character is doing, it is of galaxy-shaking import. In this case, Captain Jerry Leigh leads a team of salvagers on an interplanetary garbage scow, a trope that would be revisited in 1977 by Richard Benjamin on the (justifiably) short-lived sitcom Quark and then in 1979 by Andy Griffith in the television movie Salvage 1.

Kornbluth’s technobabble, for instance having Leigh calling off coordinates in alpha, beta, and gamma quadrants while working the buttons of a calculator, are intended to give the story a technological verisimilitude, but at the same time, Kornbluth confuses meteors with asteroids, having his salvage ship coursing through a non-existent meteor belt.

Eventually, Leigh finds himself racing his former rival’s daughter, Alice Adams, to a salvage operation and when her ship fails, he decides he will rescue her on his return to Mars, only to discover she is missing. A strange sense of chivalry pervades Leigh’s heart, more for the needs of the story than out of any characteristic Kornbluth has provided him with. This newfound need to rescue Alice extends to trying to clear her name after the Interplanetary Police decide that she sabotaged the ship that they were racing to salvage and then disappeared when Leigh beat her to it.

Adding in yet another trope of space opera, Leigh learns the story of King Cole, a pirate who died fifteen years earlier when his spaceship crashed into Pluto. Putting one and one together and coming up with four, Leigh decides that King Cole has somehow rescued or kidnapped Alice and is returning her to his icy domain and takes off at maximum g to rescue her.

In The Hitchhiker’s Guide to the Galaxy, Douglas Adams noted that “Space is big. Really, really big.” You wouldn’t know that to be the case from Leigh’s successful search and chase for King Cole’s spaceship and his resulting attempt to rescue Alice. While Kornbluth gives Alice her own volition and makes her much more competent than Leigh would believe possible, her character is still a result of the time in which Kornbluth was writing. In the end, she existed mostly to be a prize for Kornbluth’s square-jawed hero and, if she changed his way of thinking at all, it was barely worth mentioning.

Published earlier in Kornbluth’s career, and in the distant year of 1940, the attitudes encapsulated in “King Cole of Pluto” are extremely dated, not just in terms of gender politics, but in the way space travel is represented and even the way the characters are described. Leigh is referred to by the overly family “Captain Jerry” and his crew has brief descriptors to differentiate them from each other. If read with the right frame of mind, Kornbluth tells a good tale, but it does offer up the question of how the story would, or could, be told as a modern space opera. 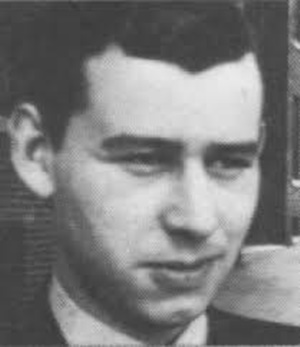