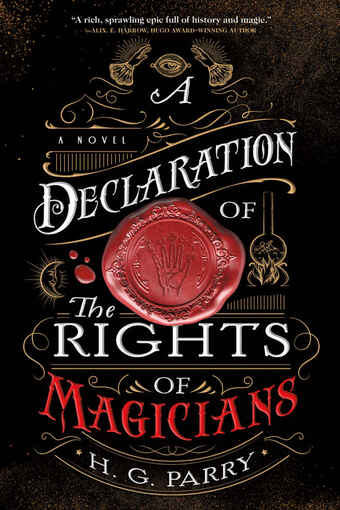 Susanna Clarke’s monumental Jonathan Strange & Mr Norrell created a believable history of English magic and interwove this history into the story of her main characters. In A Declaration of the Rights of Magicians, H. G. Parry attempts to do something similar. Whereas Clarke’s book was set during the Napoleonic Wars, Parry’s takes place in the decades leading up to this, chronicling the abolitionist movement in England, slave revolutions in the Caribbean, and the French Revolution. And whereas Clarke invented her own eponymous characters, Parry brings actual historical actors to life in her magical alternate history.

In 1779, the trade in African slaves flourishes. Besides the horror of kidnapping and the Middle Passage, in Parry’s history slaves are also force-fed alchemical substances that make it physically impossible for them to resist commands. They are imprisoned in their own bodies. In England, where only the aristocracy can use magic freely, the young member of parliament William Wilberforce is working with his close friend and eventual Prime Minister William Pitt to pass legislature outlawing the slave trade. In France, meanwhile, magic is even more tightly regulated, with commoner magicians forced to wear bracelets that burn when they illegally use their magic. (For commoners, this means any time they use their magic.) This system of control exists because of the Vampire Wars of the previous centuries, when vying vampire sovereigns used Europe as their personal chessboard. When the vampires were defeated, dark magic was banished outright and nations signed a concord to never use magic in war again.

This is the background against which Parry’s novel follows three main strands of revolution: a revolution of slaves in Haiti through the eyes of Fina, a former slave learning she has a unique magic; the French Revolution, triggered by the desire to give commoners the right to practice magic but quickly becoming something much darker; and the idealistic revolution for abolition Wilberforce and Pitt are pursuing in the halls of the British Parliament. The plot has the feel of a gathering storm, as our characters realized someone is pulling strings to plunge Europe back into war.

The greatest strength of the book is its characters. Though A Declaration of the Rights of Magicians lacks the richness (and length) of Clarke’s work, it is a compelling treatment of romanticized historical figures: on the English side, William Pitt the Younger and William Wilberforce, and, on the French, Camille Desmoulins and Robespierre himself. Parry has lovingly crafted believable friendships in each of these contexts, specifically between Wilberforce and Pitt. A large portion of the book is witty banter between the two, which is fun for a while but eventually becomes a vehicle by which major plot points are told instead of shown.

The friendship between Desmoulins and Robespierre is central as well. Robespierre comes off as a sympathetic character, working for his vision of a free France only to be slowly but steadily manipulated into creating an army of undead soldiers and eventually executing his own friends in service of a revolution spiraling out of his control as Parry charts his progression from idealist to revolutionary to despot. The book concludes with the stage set for a magical retelling of the Napoleonic Wars, though it remains to be seen whether Parry can bring Fina and her allies into the heart of this conflict and tell an alternate history where the non-European actors avoid the marginalization they often receive in non-magical histories.

The major weakness of the book is the vagueness of magic itself, which at times feels like little more than a patina to remind us that this is a magical alternate history. The Templar Church, a magic-regulating stand-in for the Catholic Church, remains a caricature throughout the book with little role to play. Magic is based on bloodlines, but on the page it never makes a more concrete appearance than people twisting shadows, throwing fireballs, or summoning tiny rainclouds. Despite this, if you like history (and Parry seems to have been thorough in her historical research), are daunted by the 700+ pages of Jonathan Strange and Mr Norrell, and want your revolutions with more vampires, A Declaration of the Rights of Magicians is the alternate history you’ve been waiting for.

Stephen Case has published fiction at Beneath Ceaseless Skies, Orson Scott Card’s Intergalactic Medicine Show, and Daily Science Fiction. His reviews have appeared at Fiction Vortex and Strange Horizons, as well as his own blog, stephenreidcase.com. His last article for us was a review of Silver by Linda Nagata.