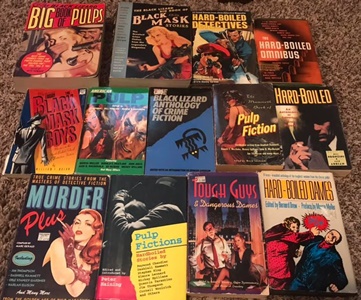 Heading into the summer of 2018, I decided I wanted to write some hard-boiled/pulp essays at Black Gate. I had covered the topic a little during my three year run with the mystery-themed The Public Life of Sherlock Holmes. Black Gate being an award-winning fantasy site, naturally I continue to find mystery subjects to write about. Why do things the easy way?

Initially, I was focusing on stories I liked in Otto Penzler’s Black Lizard Big Book of Pulp Stories, (which I’ll be talking about again next week), and I opened up with a Flash Casey story from George Harmon Coxe. And it ran all the way until December 31, when I finally wrapped up that initial series. I got some friends to help me in the summer of 2019, and there was another run in 2020. So, maybe not-so-surprisingly, it’s back for another summer of essays from the mean streets.

The plan this go-round is to pick a story from each of the dozen-ish hardboiled anthologies which I own. And at the end of each essay, I’ll talk about that particular anthology. We’re going to cover some good stuff. I’m not particularly well versed on other pulp areas, such as Westerns, Adventure, and Horror; that’s one reason I got some folks far more expert than me to help out in the past. So, this summer, the focus is on hardboiled. That’s what I own.

We should hit the 75 posts mark in the series this summer. Not bad, eh? We’ve covered a lot of ground so far, and there’s quite a bit worth reading – clearly not just from me. So, let’s head into another summer of heeled shamus’ and deadly dames. 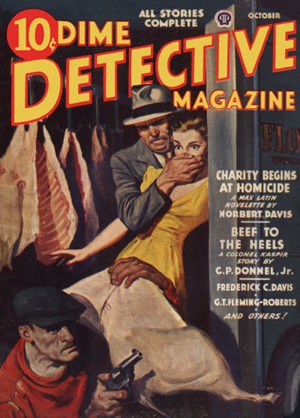 Yay, Bob! Good to have you back in Crimesville, USA.

Down these mean streets we must go, right Joe?

Did you see the new Friday Nights Neo-noir series starting up this week, with Harper? Some good hardboiled/noir stuff!

*gets out pen and paper8 oh i’m ready for this, build up that TBR.

Ha! Assuming a bright , shiny object doesn’t distract me, first story will be a Mike and Trixie tale from T. T. Flynn.