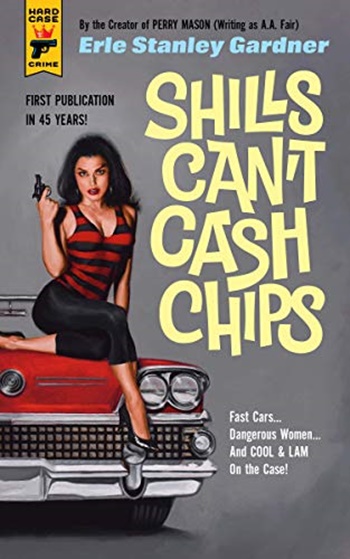 I say Erle Stanley Gardner, and you say…Ed Jenkins? Lester Leith? Paul Pry? Stop that!! All correct, but we were looking for Perry Mason. Probably the most famous defense lawyer in fiction, Mason made Gardner the best-selling author in the world at the time of his death. Raymond Burr is forever linked in minds as the picture of Mason.

But my favorite books from Gardner are those featuring his duo of Cool and Lam. And Hard Case Crime has released their fourth and final volume featuring the mismatched pair. Top of the Heap, Turn on the Heat, and The Count of 9, were all previously reissued. And as I wrote about here, Hard Case published the previously unreleased second novel, The Knife Slipped. William and Morrow Company had objected to the content and declined to publish it upon completion. Gardner moved right along and wrote Turn on the Heat, which became number two, released in January of 1940. There would be twenty-seven more books, with the final, All Grass Isn’t Green, hitting shelves in 1970. And The Knife Slipped joined the list in 2016.

Kudos to Hard Case for getting some of this series back in print. The paperbacks from Dell and Bantam can be found used, but not always on the cheap. And getting them in good condition can be a bit difficult. I myself don’t even have all 29 yet, and I’m a C&L fanboy. It’s good that Hard Case has made it easy to buy a couple of these books. And of course, it was FANTASTIC to find a lost Cool and Lam title.

If you’ve not read Cool and Lam, the widowed Bertha Cool runs a detective agency, and she hires the disbarred, down on-his-luck Donald Lam: at slave wages. His cunning and sneakiness produce results and he pushes his way into a partnership in book five.

Bertha LOVES money. She basks in the fees that Donald brings in, but she incessantly complains about the razor-thin line he walks with the law. And about his expenses, which are not at all unreasonable. She’s just so cheap she makes Scrooge look generous.

This constant friction makes for an entertaining duo. As Donald writes,

‘At that, our partnership would probably have split up long ago if it hadn’t been so profitable. Money in the bank represented the most persuasive argument in Bertha’s life, and when wit came to a showdown where the dissolution of the partnership was threatened, Bertha could always manage to control her irascible temper.’

So on goes the battle, case after case. Donald’s secretary, Elsie Brand, is innocent as the driven snow, and worships Donald. Another series regular is Sergeant Frank Sellers. He is constantly trying to nail Donald for his shenanigans, and he has a thing for Bertha, which flusters her. Bertha talks tough to Frank while he pursues his work, but he handles her better than anybody but Donald. He’s not a bad cop, but he isn’t very creative. I’d put him a couple steps up from Inspector Lestrade. Maybe even Inspector Japp. I can see Sellers using the rubber hose on someone, though.

‘Bertha turned and started waddling down the corridor, a hundred and sixty-five pounds of bulldog tenacity, hair-trigger temper, greediness and shrewd observation; an explosive combination of characteristics that were rendered somewhat less obnoxious by an underlying loyalty when the chips were down.’

And in the initial meeting with the client, Bertha says, “Everybody gets fooled by Donald. He’s young and little but the bastard has brains.”

Bertha sums up the partnership well in that same meeting: “I handle the financial end of the business. He supervises the outdoor work.”

She does do some field work, including, literally, sitting on reluctant females when Donald asks her to. But mostly, she stays in the office and squawks into the phone about expenses, and tries to find ways to push up their client’s fees, while Donald runs around in the field and does all the heavy lifting. Since the stories are told in the first person, he’s our Archie Goodwin.

Lamont Hawley is the head of the Claims Department at Consolidated Insurance. He wants help with a whiplash case, resulting from a client rear-ending a woman at a traffic light. This is the twenty-second book in the series. The twenty-fifth, Up for Grabs (published two years later), also deals with an insurance company worried about a whiplash case. They’re different stories, but I find that a bit curious.

Bertha says, “It’s the kind of of business that there’s money in, Donald, not this wild-eyed sharpshooting you’ve been doing.” 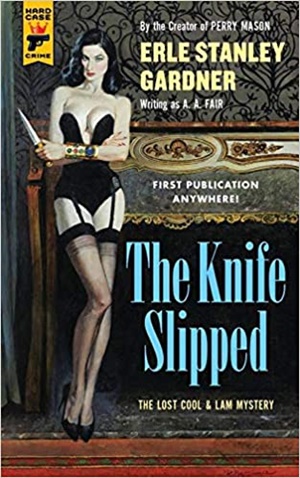 Of course, there’s much more going on under the surface – much of which the client doesn’t even know about. But Donald ends up wanted for murder, and he enjoys reminding Bertha that this case was her idea. And her plan to get ‘normal, less troublesome’ cases for the firm. He doesn’t openly rub salt in the wound, but the little digs are fun.

Donald is about 5’-6”, about 130 pounds, and regularly gets beaten up in the stories. I commented in this post on the failed Cool and Lam pilot, that perhaps viewers weren’t ready for a physically underwhelming hardboiled PI. Regardless, it works in the books. And as Frank says, “You’re a Pint-Size, and it’s awfully damned easy to underestimate you.”

Women are attracted to him, however. It doesn’t seem to be any maternal instinct, either. He gets plenty of action. In this one, two are only interested in him to further their own ends, while a third seems somewhat interested, but crime gets in the way of any progress.

Lam gets knocked unconscious in a woman’s apartment, and ends up joining in a criminal conspiracy with the guy who hit him. Gardner’s plots are overly convoluted in this series. I often have to re-read Donald’s explanations. And unlike the Nero Wolfe stories, where everyone gathers at the end for the big reveal, there are often a couple such expositions. I’ve read over half of this series, and I’ve not come close to solving one. Ever. I do get everything by the end of the book, but I do have to pay attention and sort through things.

I want you to buy this book and read it, so I’m not going to spoil the story. But there are a couple different players working their own angles regarding the accident. And a few more car accidents are tossed into the mix. Along with a rival detective agency. And a local sheriff about to lose his job. Did I mention, ‘convoluted?’

This is another fast-paced, enjoyable read, giving the readers exactly what they want from a Cool and Lam novel. In the nineteen-forties, William and Morrow had Gardner publishing two Perry Masons, one Cool and Lam, and one Douglas Selby book, every year. And I don’t think the quality suffered. He was truly an excellent writer.

I recommend this book, and this series. Strongly. I suggest starting with The Bigger They Come, which introduces the characters and lays the groundwork. Then, grab Hard Case’s Turn on the Heat, which is the second book. The only real division in the series is ‘Before Donald becomes a partner,’ and ‘After Donald becomes a partner.’ But I haven’t read them in order, and it’s not a major problem. Books seven, eight, and nine, are set around World War II and doing those in sequence isn’t a bad idea.

I wish these books were better known today. I’m glad Hard Case Crime has made some of them available. Check out Cool and Lam.

Fry me for an oyster!

A (Black) Gat in the Hand: A Q&A with Charles Ardai

A (Black) Gat in the Hand: The Cool & Lam Pilot 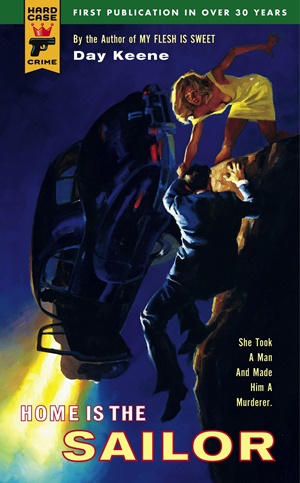 My dad was a big of them and had a lot of them (I think they’re still in the old home attic). Between you and him, I really need to give them a go.

Man, you are always expanding my reading, so i thank you for that.

i remember as at a younger age watching old black and white Perry Mason and other mysteries with my grandmother and loving them. my love for hard boiled, mystery, hell even sci fi and fantasy i owe to her wide swath of interests, and when the HBO Perry Mason came out earlier this year, i was reminded that i need actually look up and read some of it.

i will certainly look up the books with these two in them, probly before Mason, but thank you for the article and all of your content, forever grateful to the work put in and this webssite in general.

Fletcher – Absolutely dig up a couple of those and give a read. Earlier in the series if you can, but that’s not a deal breaker. They’re just such fun! And obviously, ESG knew what he was doing.

silentdante – I came to Cool and Lam late. I’d been a mystery fan for at least thirty years. And they just knocked me for a loop.

I use ‘fun’ a lot for them. They’re not humorous in the way that Norbert Davis or Carl Hiassen are. But man, they are absolutely fun, hardboiled reads.

Donald is always scheming and playing angles. All mind, with no muscles to fall back on. And Bertha might look one-dimensional as a penny-pinching screamer, but there’s a little more to her.

Don’t get put off by the complexity of the plots. I really do have to re-read some of Donald’s multi-point speeches. But I still manage to follow along.

I have the previous Hard Case Man and Cool books, though I haven’t read any of them – you know how it is! I definitely have to fix that. Otto Penzler reprinted a couple of Perry Masons recently, and I read my first one a few months ago and enjoyed it immensely. You don’t get to be the most successful writer in the history of American publishing for nothing!

Thomas – I only read my first Perry Mason around 2018. I find I like the ones from around 12 on more than the first dozen-ish. Less typical hardboiled PI-like.