Since its release at 2019 GenCon, the RPG Pathfinder Second Edition has been growing in popularity. With a character creation system that allows for immense character customization, it has won over many converts among the scores of existing fans of the game’s first edition, even with all of the difficulties involved in getting those fans together to play the game during a global pandemic.

It’s worth a quick recap of what Paizo has put out to support and expand this game in just a little over a year:

You can get the harcopies of these gaming resources through pretty much any game shop, but digital copies (as well as the hardcopies) are available directly through Paizo.com. If ordering Paizo products – including First Edition Pathfinder, Pathfinder Adventure Card, or Starfinder products – through their website, there’s a one-time promotional code of “holiday21” good through January 17, 2021.

For those looking for a way to step into the game, or introduce it to someone else, the newly-released Pathfinder Beginner Box (Paizo, Amazon) is a great way to jump right in with a premade adventure, a set of streamlined rules, pregenerated characters and the ability to create new characters, along with dice, rules reference cards, a map, and a variety of pawns for the basic creatures and characters that can show up in this boxed set.

The pawns included in the box represent several of the most iconic creatures in the game, so if you’re interested in having a visual representation for them that can go on the tabletop map but without the hassle of finding, purchasing, or painting the relevant miniatures, the Beginner’s Box provides a quick and easy method to get some of the most useful pawns – along with bases to fit them – all in one set. The scenario included within the game has already been sanctioned for play with the Pathfinder Society Organized Play … and even though it’s hard to get together with others to play in person, there have been an incredible number of online conventions that have allowed for players to play together remotely.

For someone who’s already a Pathfinder fan, and certainly not a beginner, then there are a lot of these resources that might be great picks. We’ll get to the Gamemasters among us in a moment, but let’s focus first on the players. For players, my major recommendation as a must-have for players, beyond the Core Rulebook, would be the Advanced Player’s Guide. I’ve gone into it in some depth in my previous look at the Player’s Guide, and it really does expand the options to make feasible fine-grainted customization of characters, with new feats and archetypes that allow for builds of exactly the sorts of characters you want to play.

Another great option for players with a spellcasting emphasis is a spell deck based upon their magical tradition (arcane, divine, occult, or primal). These helpful cards allow the player to easily keep their character’s spellcasting options handy and reference them without flipping through pages of the sourcebook each time they’re trying to cast a spell. 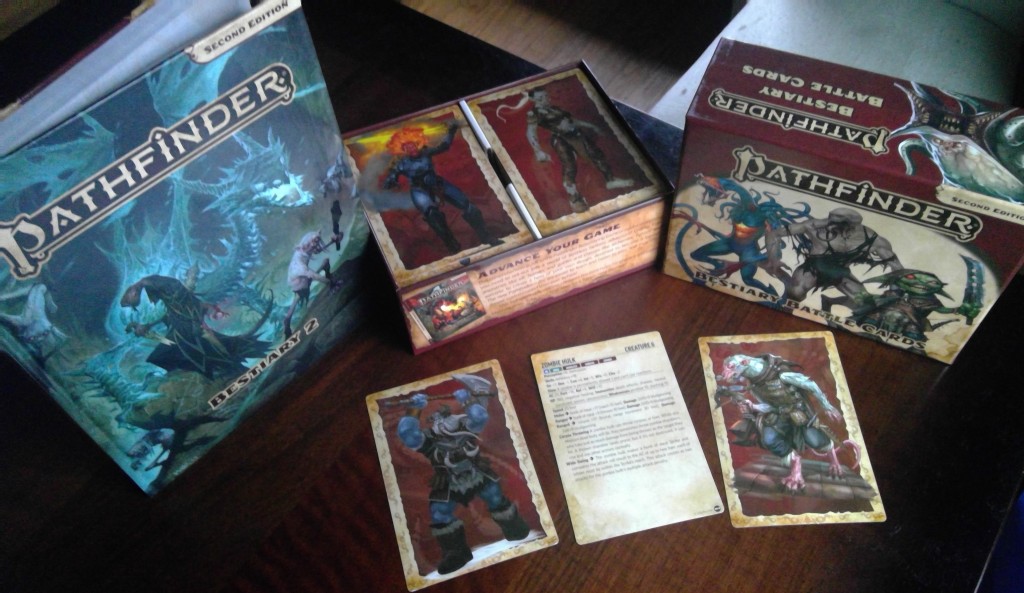 For the Pathfinder Gamemaster, then one of these supplements that deserves a second look are the Bestiary Battle Cards, available both for the original Bestiary and for Bestiary 2 and a set of NPC Battle Cards. The box of these oversized cards is fairly massive, but the nice thing is that you generally don’t have to take the whole box with you to a game. If you plan ahead to pull out just the cards you’ll need for the encounters you have planned, then it makes it easy to reference the rules for those specific creatures when you need them, without the hassle of constantly flipping through the Bestiary book itself to find the page, or jumping between them if it’s a dynamic encounter that includes multiple creatures. The fantastic artwork on the back side of these cards works great to show the images to the players without revealing mechanics details to them.

If a player is a spellcaster who uses summon spells regularly, then these allow you to easily keep track of the creatures that can be summoned. With the Summoner class being one of the classes available in the summer 2021 release of the Secrets of Magic rulebook, these may prove to be particularly useful … although pretty much all of the existing spellcasting classes can make use of summoner builds. And, since I have these cards, there’s a good chance that I’ll make my next Pathfinder Society character into a conjuration build that relies heavily on summoning spells, even before the Summoner class becomes available.

Of course, in the modern era you can access and explore the rules for Pathfinder Second Edition without even having to go out to buy the books themselves. All of the rules available in the main rulebooks, and even most tangential rules introduces in secondary supplements, are available through the sanctioned Archives of Nethys website. You can also access the Pathfinder First Edition and Starfinder rules there.