Lots of stock footage, as usual for this era, but also decent miniature work and excellent alien design. It seems that this alien hanging around the North Pole in a magnetic-powered UFO is a scout looking for worlds to colonize, and the Earth really fits the bill. The submarine pursues him as he preys on shipping. It takes awhile to really get going, so stick with it, but the atomic sub finally gets their alien.

Though a number of name actors appear in this film, the acting is rather wooden. Arthur Franz, a second-string leading man, leads the way in a cast that includes a tired-looking Dick Foran, the old cowboy movie star Bob Steele, and Tom Conway (see below for another Conway appearance) as a Nobel Prize winning oceanographer, though I’m pretty sure they actually don’t give Nobel Prizes for oceanography. The only one who lights up the screen is the beautiful but ill-fated Joi Lansing in a brief appearance. She and the alien are the film’s highlights. 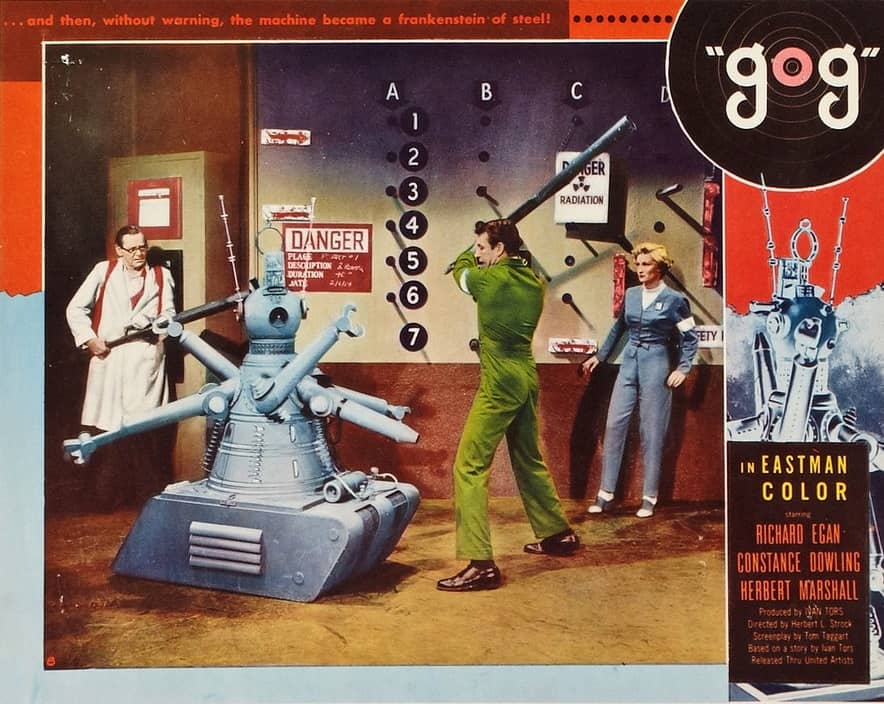 Gog is the third of a loosely-knit trilogy by Ivan Tors concerning the adventures of the Office of Scientific Investigations, following The Magnetic Monster (1953), and Riders to the Stars (1954). It’s an early color SF effort and was also shot in 3D, though it mostly screened in 2D.

If Gog was prose, it would be an Analog story where science is of prime importance – not to say they got it all right, but the storyline is definitely devoid of killer shrews, crawling eyes, and deadly mantises. Set at a secret underground government lab where a team of scientists are designing and building a prototype space station, OSI agent Richard Egan investigates some suspicious deaths. He takes a tour of the facility that eats up most of the film’s running time. The occurrence of fatal accidents, all caused by technology gone bad, accelerates. Scientists start dropping like flies, several at the hands (or nipping claws) of runaway robots named Gog and Magog, who look something like incipient Daleks.

The film’s name might be inscrutable to today’s audience, but 1950’s viewers would recognize the Biblical reference and its identification with armageddic revelations and the boogeyman communist Soviet Union, the film’s secret antagonist.

Bela Lugosi stars as a barking-mad scientist (of what exact discipline is hard to discern), though this time he’s actually alive throughout the movie, so that’s a plus. The inimitable Tor Johnson is his abused sidekick, Lobo. Also, keep an eye out for William “Billy” Benedict (perennial bit player best known for his recurring role as Whitey in the Bowery Boys movies, who has an astonishing 314 entries in the IMDB actor data base between 1935 and 1988) whose brief appearance brings a welcome soupcon of acting competence.

Bela plays Dr. Eric Wornoff with a gleeful insouciance. Seems he’s trying to create an ultimate human being through radioactivity or something, whom he designates “Bride of the Atom” complete with a formal white wedding gown. Also, there’s something about a fresh water lake octopus that Bela gamely wrestles during the film’s climax. Bride lacks something of Plan Nine’s utter zaniness, but is still seriously entertaining. 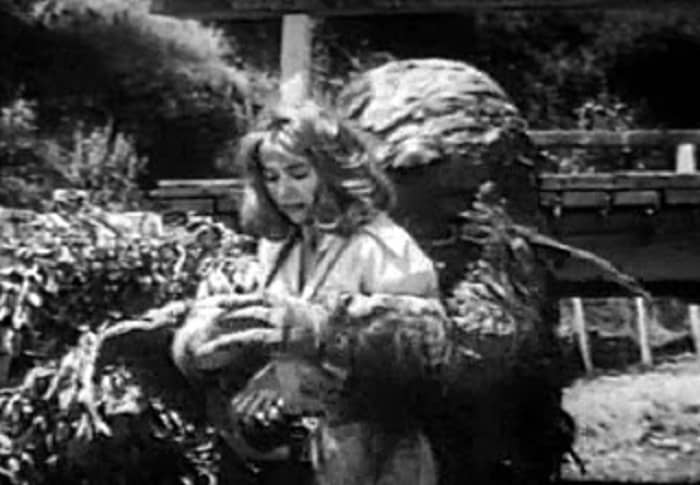 Early Roger Corman effort (actually the second movie produced by his brother, Gene) about aliens invading an isolated (Why? I suspect budgetary reasons.) rocket base and using the scientists there as incubators. Proto Alien, but lacking in excitement and oozing the typical Corman cheapness, as exemplified by re-using the monster-suit from the just-wrapped Corman epic, Teenage Caveman.

Guy goes into space and comes down with an alien inside him. Chaos ensues with an annoyingly intrusive sound track. The sixty-two minute running time seems much longer.

Starring Mike Connors (who went on to television fame as “Mannix”) as the jungle guide and Tom Conway as the prototypical mad scientist whose wife (whom he keeps locked up in her bedroom) declaims early on (and quite correctly) “You’re crazy!” He uses a combination of voodoo and science (though neither remotely authentic) to transform a native woman into “a new being, not man or animal, but a combination of the best of both.” For his sins against humanity (and acting) Conway is forced to wear one of the most ridiculous hats ever to appear on film. It’s only slightly less ridiculous than the creature the actress morphs into, or the screenplay.

A curious lack of stock footage makes it impossible to pinpoint the setting, but I’ll take a stab at it and guess somewhere in Africa. Conway’s utter lack of effort (he never changes his facial expression and says his lines likes he’s reading them off cue cards) is balanced by Mara English’s (the sultry yet surly temptress whose charms Connors smugly resists) unnatural verve. It might not have been totally the fault of this movie, but after Voodoo Woman English retired from acting at the age of twenty-one.

The ludicrous plot is surpassed only by the terrible action sequences. Nothing good to say about this one.

Previous articles in this series include:

John Jos. Miller’s latest publication is: “A Ghost of a Smile” Worlds of Light and Darkness: Best of Dream Forge and Space and Time Magazines. Uproar Books, e-pub and TPB. Available on Amazon, now. Next UP: “Fatal Error” with Victor Milan in Joker Moon July, 2021
www.facebook.com/john.j.miller .9883

Wow, here is a long, wonderful Saturday afternoon/evening with the monster movies on the syndication channels, back in the day! Some of them (The Atomic Submarine, with the “eye creature” going all gooey at the end, Gog, which curiously is in black&white in my memory, perhaps due to the lack of color TV at that time of my life) stick right out. Others have been altered (looking at you, Night of the Blood Beast) thanks to Mystery Science Theater 3000. For better, for worse? Who can say?

Mine was Saturday nights, starting with Chiller Theatre on WPIX, and moving to WIR SF Theatre, followed by Spectacular (if I’m remembering that right) Theatre, which was usually some sword and sandal type production, frequently The Sons of Hercules. It’s a wonder my brain didn’t melt.

And WNEW (channel 5) with Creature Features, too. Oh, the abundance of classic/cult sf and horror films on television in the NYC area, back in the 1960s and ’70s. It is mind-croggling, as Harlan Ellison would say.

Yes, I have much vaguer memories of Creature Feature on WNEW. By the way, I note a typo in my first reply. That should be WOR, of course. They also supplied me with an endless supply of Mets games and Est Side Kid epics, which also still have a soft spot in my memory.

Oceanographer Fridtjof Nansen won a Nobel in 1922. For Peace, but still….

Probably well-deserved, unlike Conway’s character, which was entirely imaginary. Weirdly, Conway does little or nothing throughout the film.