Joe Haldeman’s The Forever War is one of the most honored science fiction novels of all time. First published by St. Martin’s Press in 1975, it swept every major SF Award, including the Hugo, Nebula, and Locus awards. A decade later, in 1987, it placed 18th on Locus’ list of All-Time Best SF Novels, ahead of The Martian Chronicles, Starship Troopers, and Rendezvous with Rama.

Unlike many SF classics, its reputation has grown steadily over the decades. It’s been widely praised by critics, from Thomas M. Disch (“It is to the Vietnam War what Catch-22 was to World War II, the definitive, bleakly comic satire”) to contemporary authors such as Pulitzer Prize winner Junot Diaz.

Here’s Diaz, with a review that became a blurb on later editions:

Perhaps the most important war novel written since Vietnam… Haldeman, a veteran, is a flat-out visionary… and protagonist William Mandella’s attempt to survive and remain human in the face of an absurd almost endless war is harrowing hilarious heartbreaking and true… like all the best works of literature The Forever War takes you apart and then, before you can turn that last page, puts you back together: better, wiser, more human. Simply extraordinary.

My favorite contemporary review is by Peter F. Hamilton:

I first read this twenty years ago and have never forgotten the wonder and fury it kindled at the time. Anyone who talks about the glory of war has obviously never read it. A beautifully detailed and intensely personal account of a conflict which lasts for over a thousand years, as told by one grunt who lives through it all. Only a writer as skillful and knowledgeable as Haldeman could use war’s dark glamour to lure the reader in and then deploy the same fascination to show just what kind of effect this orchestrated barbarism can have on the human soul.

The Forever War was the inaugural title in Orion’s groundbreaking SF Masterwork series in 1999, a list that has grown to well over 100 volumes. It has been in print nearly continuously for the last four and a half decades. Here’s just a handful of the most noteworthy editions.

There are significant differences in these editions that many modern Haldeman fans remain unaware of. Most notably, the early (pre-1991) editions of The Forever War, including the popular 1976 Ballantine paperback edition with Murray Tinkelman’s cover, were significantly abridged. Here’s the details from Wikipedia.

Editions published prior to 1991 were abridged for space by the original editor (omitting the middle section, a novella titled “You Can Never Go Back”). These early paperback editions have “a white cover showing a man in a spacesuit with a sword, with symbolic clocks all around,” according to the author…

The 1991 edition restored many expurgated sections, primarily dealing with the changes that befall human civilization over the course of William Mandella’s life. This version’s cover “has a futuristic soldier who looks like Robin Williams in a funny hat,” as Haldeman notes, “But alas, not all of the changes got in, and the book has some internal contradictions because of things left over from the [earlier version].”

The release with “a futuristic soldier who looks like Robin Williams in a funny hat” is pretty clearly the 1991 Avon edition.

By the end of the 90s, The Forever War had finally been published in a fully restored version. Here’s Wikipedia again.

In 1997, Avon published the version that Haldeman called “definitive”, with “everything restored” and “a less funny cover illustration.” This version was republished twice, first in October 2001 as a hardback with a cover showing spaceships in battle over a planet, and again in September 2003, with the cover art depicting a device worn over the eye of a soldier.

In 1999, it was republished by Millennium, an imprint of the Orion Publishing Group, as part of the SF Masterworks series. It featured as the first novel re-printed in the series… This is the same version as the 1997 Avon publication and has the same Author’s Note.

The Forever War has been adapted in multiple media — though rather curiously, I think, it has never been filmed, despite multiple attempts. Ridley Scott optioned the rights in 2008 for a big-budget 3D release, and Warner Bros. explored a project in 2015 with Channing Tatum in the lead role, but neither project went anywhere. 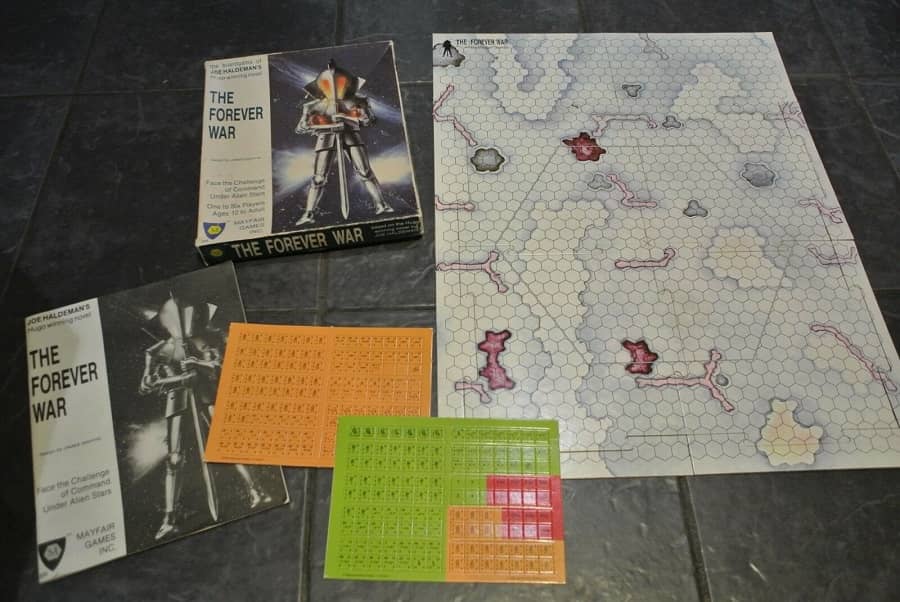 The Forever War board games from Mayfair Games (1999)

Other media adaptations have had more success. In 1988 Belgian comic writer Marvano worked with Haldeman to release a three-volume graphic novel adaptation, and in 1983 Mayfair Games published a game based on the novel.

Joe Haldeman was a combat engineer in the Vietnam War; he was wounded in combat and received a Purple Heart. The Forever War is fairly obviously a commentary on his experiences. Here’s Wikipedia again.

The novel is widely perceived to be a portrayal of the author’s military service during the Vietnam War, and has been called an account of his war experiences written through a space opera filter. Other hints of the autobiographical nature of the work are the protagonist’s surname, Mandella, which is a near-anagram of the author’s surname; Mandella being a physics student, like Haldeman, as well as the name of the lead female character, Marygay Potter, which is nearly identical to Haldeman’s wife’s maiden name. If one accepts this reading of the book, the alienation experienced by the soldiers on returning to Earth – here caused by the time dilation effect – becomes a clear metaphor for the reception given to US troops returning to America from Vietnam, including the way in which the war ultimately proves useless and its result meaningless. He also subverts typical space opera clichés (such as the heroic soldier influencing battles through individual acts) and “demonstrates how absurd many of the old clichés look to someone who had seen real combat duty”.

The Forever War is the first novel in a hugely popular trilogy, which includes the thematic sequel Forever Peace (1997) and direct sequel Forever Free (1999).

Haldeman returned to the universe of The Forever War a fourth time for Robert Silverberg’s 1999 anthology Far Horizons, with the novelette “A Separate War,” a first-person tale from Margay’s point of view of the events of the first book. It’s also included in Haldeman’s collection A Separate War and Other Stories (2006).

The Forever War was published in hardcover in 1975, and released in paperback by Ballantine Books in 1976. The paperback edition (at the top of this article) is 218 pages, priced at $1.50. The cover is by Murray Tinkelman.

I first read the Ballantyne edition. I loved the cover but at the end of the novel wondered about the cavalry sabre depicted.

God question, and not one my fading my memory can help with. Maybe someone who remembers the novel a lot better than I do can help. Anyone know what happened to the cavalry sabre?

The last chapters of Forever War were adapted to the stage by the Organic Theater in Chicago in late 1983. I happened to chance upon a news feature on it when I was in Chicago for training that week. It was a sparse stage set with one of the parts being broadcast on a TV screen.

Wow! Right you are. A little online searching was all it took to dig up the cast list an a coupe of production stills, and they look pretty good. Check them out here:

This article gives me new respect for Haldeman. Never knew he was a veteran of Vietnam. I have the anthology study war no more in my TBR pile. Next read definitely (plus it’s got Mack Reynolds in it)

STUDY WAR NO MORE was the first Haldeman book I ever bought, way (way) back in 1979. It’s a terrific anthology. I wrote about it a few years ago:

Did not know of the sequel. Just bought it, thanks.

In addition to being about the Vietnam war and Haldeman’s experiences there, I think it was also some sort of response to Heinlein’s “Starship Troopers”.
I find FW superior to ST partly because the combat descriptions are so vivid, while Heinlein (who was discharged from the Navy for health reasons and never saw combat) reads more like a textbook.

Also, I’m a sucker for time dilation as a plot device, and I while I’m no fan of love stories I thought the ending was the icing on the cake, when Mandella arranges it so that he arrives in the same spacetime as his girlfriend.

Definitely one of my favourite SF books.

this is one of those classics i loved getting around to reading, though i always got this one mixed up with another SF military book that is similar, though i cannot remember the name now, i am glad i went back to read this. while i didnt grow up with any connection to the military i think it makes it’s point well and lets you understand where the satire is, which is always something i admire.

I read “Forever War” in the 80s sometime. Loved it even though I prefer the more ‘adventure’ science fiction where they have legit FTL/Warp Drives etc. While the first image is the type of cover I almost hate (save modern ones with bad photography or abstract garbage) it was VERY relevant – even the classic military sword. During his training he was taught to use pre-modern weapons and ended up using as such during combat…don’t want to spoiler to those who haven’t read it. The Jim Burns cover was FAR more accurate to the book – and the comic adaptation spot on.

Strange no one is talking about the social engineering. Beyond the book being a protest on all war and an ‘anti-Starship Troopers’ it talked about various means of social control that largely seem coming true over the decades albeit from a 70s lens. Marijuana being legalized but frankly it was “The population NEEDS some LUDES. Why waste time jailing them?” by the super-world state. Then they had the shift to Homosexual full legality then acceptance until it became the norm by slow social engineering. It was at first to “Control overpopulation” but then remove “Over”… Regardless of ‘right or wrong’ what people do in their bed and free time it annihilated all cultural and family ties with almost no resistance. People were born from cloning facilities into state nurseries and basic schools. Then they did what work they could, educated themselves for better positions. They had fun, made friends when they had time to do it. But they were all leaves in the wind and just worker slaves in all but name. Meanwhile by time dilation whole communities of ‘rulers’ kept themselves immortal and unchallenged. Likewise today we see a false media giving a flood of propaganda that has ‘sides’ arguing but unable to do anything as fear of an outside threat keeps people inside or working.

A lot of people screamed about the book back in the day for the same reasons reversed later. First for anti-war message, predicting legalization of Pot and Homosexuality (still Illegal most places when written) – then for anti-war message; Serious, he published a follow up but the country was hyped up for the gulf… And for treating MJ legalization and a social shift as an issue when now they are but the connection to a back room deal of some sinister rulers might seem as propaganda against it. IMO Haldeman was just making good science fiction – his own character when called “The old Queer” just shrugged it off – he was there to fight the war and didn’t care what if what they did for fun. And of course “He’s just insulting Heinlein”… I wonder if Heinlein was miffed, but IMO he flattered him like CS Lewis flattered Stapledon by writing a whole book in opposition to the views/story/plot.