One of the things I miss about modern publishing is mass market anthologies. There’s still loads of anthologies being published, of course — we’ve covered dozens in just the last few months — but most come from small presses, and all of them are in hardcover or trade paperback. Casual buyers just don’t buy short fiction these days. Certainly not in enough volume to make inexpensive paperback anthologies viable, anyway. Which is a shame, since there were a ton of ’em in the 70s and 80s, and it was pretty much the way you discovered new authors back then. This fact was not lost on publishers, and the savvy ones — like Ace and DAW — promoted their stable of authors pretty regularly in themed anthologies.

Take the Tomorrow’s Warfare trilogy of anthologies, for example. Edited by the powerhouse trio of Joe Haldeman, Charles G. Waugh, and Martin Harry Greenberg, they appeared between 1986-88 from Ace Books. Each followed a loose future-war theme, and each was packed with stories from the top writers in the industry.

Anthologies like this don’t exist in paperback anymore. But that’s okay, because I’m still discovering  the old ones — and they’re are still widely available, and they’re still cheap. I wasn’t even aware of this series until I stumbled on two of the three anthologies above in that gargantuan haul of $1 paperbacks I brought home from Windy City Pulp and Paper in April. And I just ordered the third one (Supertanks) on eBay for $1.94.

Back covers for Body Armor: 2000, Supertanks, and Spacefighters

These are fun little anthologies, and still highly readable today — especially if you’re interested in discovering writers and series from that era (and let’s face it, you definitely should be). I can’t guarantee that you’ll find brand new copies for a buck like I did, but I can guarantee that you can find copies for about half of what a modern paperback costs – – and that’s not a bad deal at all.

Let’s take at look at the contents for each, starting with Body Armor 2000, which contains an Allliance-Union novella by C. J. Cherryh, plus novellas by Joe Haldeman (“Hero,” nominated for a Hugo award in 1973) and Allen Kim Lang, and much more. 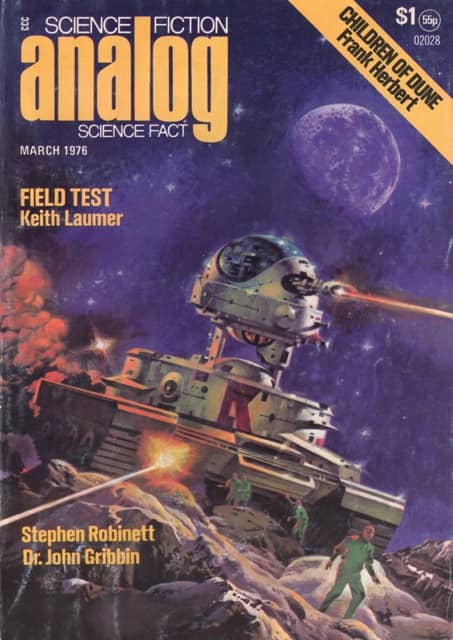 Supertanks has a Hammer’s Slammers novella by David Drake, a Bolo story by Keith Laumer, and the complete short novel Damnation Alley by Roger Zelazny, nominated for a Hugo in 1968. 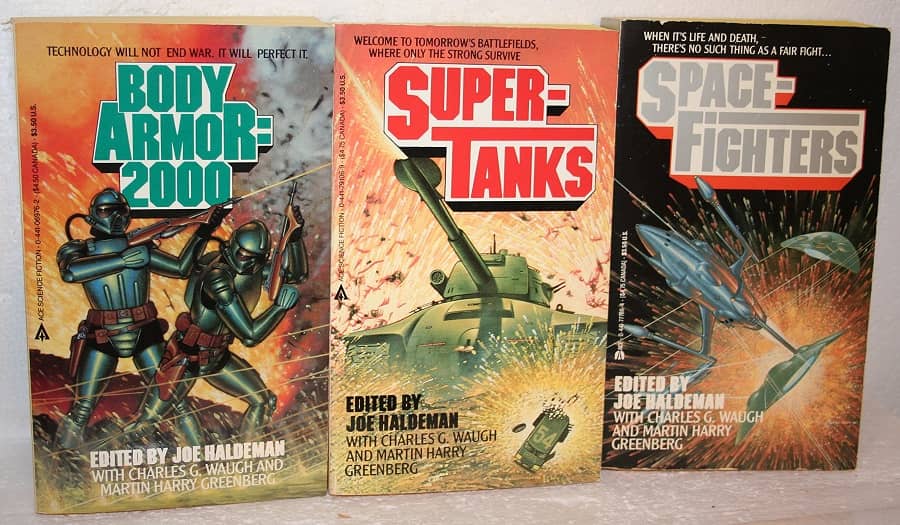 Finally we have Space Fighters, which includes an Instrumentality of Mankind story by Cordwainer Smith (the Hugo nominee “The Game of Rat and Dragon”), a Berserker novelette by Fred Saberhagen, and one of the most famous SF short stories of the 20th Century, “Ender’s Game,” by Orson Scott Card.

Taken together, these three anthologies make a terrific snapshot of some of the best in military and adventure SF from the late 20th Century. I’m sad that they don’t make ’em like this any more…. but as long as I’m still discovering inexpensive treasures like these, I really don’t have much to complain about.

All three were published by Ace Books, and all had covers by Walter Velez.

Joe Haldeman did no further books in the series, but David Drake picked up the reins in the late 80s and produced three new titles with Waugh and Greenberg. Like the first ones, they were all published by Ace with covers by Walter Velez.

I looked at these (plus Space Dogfights, edited by Algis Budrys) in more detail once the copies of Space Gladiators and Space Dreadnoughts I ordered finally arrived. See all the details here.

you know, i think i get most of my short story reading in through the anthology magazines. well 4 of them, Magicians Skull, Fantasy and Science Fiction, Azimov’s, and Analog. i also sometimes check out Clarkesworld, and the many different edited “Years Best” anthology’s. though i must admit, maybe not in the last year or two, but i used to find new authors from self published stuff that was free or very cheap for the first hit. i feel like that sort of thing has stopped now, or there is much less of it because people dont see immediate rewards and dont have the patience to build a fanbase. who knows though, i dont exist in that world, i just read it.

thanks for the write-up, couple more titles to hunt down is always nice!

Glad you like TALES FROM THE MAGICIAN’S SKULL! What did you think of the latest issue?

Wow, I never realised so many other titles in the series. I only have the thoroughly enjoyable Body Armour 2000.

A different anthology, also by Ace which I enjoyed, may have been covered here before, is Robot Warriors, with an introduction by Gordon R. Dickson. Different series but to me kind of fitted with Body Armour 2000, and i am sure the rest.