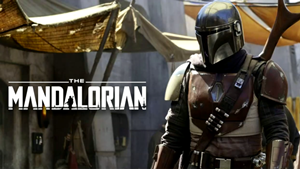 I read my buddy William Patrick Maynard’s post on Guy Boothby’s The Curse of the Snake, and I decided to write a The Public Life of Sherlock Holmes essay on Boothby’s gentleman thief, Simon Carne. But then, I signed up for a one-week Disney+ free trial. And my son and I watched the first three episodes of The Mandalorian, and I knew that Boothby could wait.

I was ten years old when my dad took me to see the first Star Wars movie at the theater. So, I go back to the beginning. I like Star Wars, but I’m not a fanatic. I didn’t care for the second trilogy and I think it was more than ten years before I saw one (I forgot which). I liked Solo, but didn’t like The Last Jedi. I quite enjoyed Star Wars Rebels, but my son likes Star Wars Resistance way more than I do. I’m not predisposed for, or against, a Star Wars production. I judge each one on how much I enjoy watching it.

And right out of the gate, I like The Mandalorian more than a chunk of the movie franchise. Most of my knowledge of Mandalorians comes from Rebels. I don’t know that I ever pondered that Boba and Jango Fett were ones. I just knew they were bounty hunters.

Jon Favreau, who played a huge part in the success of the Marvel franchise, is the creator of this one, and I think he nailed it.

The imdb.com description is pretty accurate:

The travails of a lone gunfighter in the outer reaches of the galaxy, far from the authority of the New Republic.

I immediately picked up on the vibe of the lone gunslinger, wandering from town to town – in this case, as a bounty hunter on a job. We never see star Pedro Pascal’s face, as he never takes off his helmet. He only speaks the bare minimum, making him the stranger of few words.

The series opens with Mando (what Carl Weather’s character calls him, and since that’s easier to type than the whole word, I’ll go with that.) entering a dive bar in the middle of nowhere on a frozen planet. It’s a spot-on recreation of the classic western scenario of the cowboy riding into town and confronting some bad guys in a saloon where his prey is. I think it’s a great way to set the tone.

The bounty in episode one (the real one, not the intro story) was a great choice, and it set the story for the next two episodes (and beyond, I’d assume). My son Sean and I were both ‘Oh, my!’.

Visually, the cinematography seems to lean towards ‘dark’ a bit, which fits the bounty hunter theme. And there are wide open spaces and vistas, mixed in with tightly packed urban settings. I think the series looks excellent. It’s a treat to look at.

Carl Weathers, Nick Nolte, and Werner Herzog have appeared so far. It’s nice to see (or just hear) some familiar folks showing up. 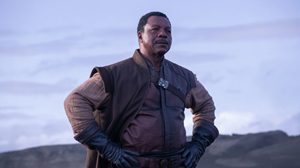 I liked Solo, because it was in large part, a heist movie. And a heist caper, with a Star Wars overlay, is a winner in my book. I like Westerns, though I prefer Joel McRea and Randolph Scott to Clint Eastwood and John Wayne (though I cannot pass by Rio Bravo. Just can’t do it). The Mandalorian is a Star Wars throwback to the lone gunslinger western. It’s a great approach, and so far, it’s excellent.

It looks like there are eight episodes, and three have aired as I type this. Each one is about 40 minutes long, which is a good length. Apparently, it’s already been greenlit for a second season. I can’t imagine why it wouldn’t be.

Also, I really like the ‘drawings’ that are included at the end of each episode. They look like sketched pictures of images from that episode and they are really cool. I look forward to seeing them each time.

I don’t want to give any spoilers, so I’m just going to wrap up by saying I highly recommend checking it out. You can see it for free for a week, so there’s no reason not to give it a try.

So far I’m not completely sold. I’ve not hated the show, but I’ve also not been overly impressed. The effects are awesome, but the story plods along too slowly, in my opinion. And for “Mando” to be a member of one of the greatest groups of bounty hunters/mercenaries in the galaxy … well … Jawas? Really? Though I’ll admit episode 3 made up for a lot. For that matter, each episode seems a little better than the one before (so far), so I do see improvement coming along. Maybe by the end of this first seasons I’ll be a fan, but I’m not there yet.

R. .- I’d watch Rogue One, because it’s a prequel to the very first movie (A New Hope) and I liked that.

Solo can be watched whenever. It’s just an origin story for him.

Then you’ve got The Force Awakens, which takes place some time after Return of the Jedi. I liked it. It’s immediately followed by The Last Jedi. Which I thought absolutely plodded along.

Star Wars Rebels was a good, multi-season cartoon, which ends at the time A New Hope starts. I liked it very much.

Well, you definitely have to Watch A New Hope, The Empire Strikes Back, and Return of the Jedi as early as possible. They are the foundation that everything else builds upon and which establish what Star Wars is about.

Everything else is basically optional. The Phantom Menace, Attack of the Clones, and Revenge of the Sith also have a considerable following. Though Episode 1 and 2 are of much lower quality than Episode 3, and Episode 3 can stand fully on its own as a movie without needing to watch the other two.

Rogue One is also quite popular. Solo wasn’t watched by terribly many people it seems, but I’ve not really heard anything too bad about it.

Now Awakening of the Force and The Last Jedi have been extremely divisive and seem to be pretty much despised by old fans. I’ve seen them both once and am fully of the opinion to completely ignore them.

Canonical Chronological Order (my rating out of 5):

There are also numerous novels and comic book series that are canon, and they fit in all over the place.

While there exists a huge Expanded Universe of books, comic books, and other materials, in the Disney era, all the books before “A New Dawn” are now “Star Wars Legends,” no longer part of Canon, as are any of the earlier comic books (only the new ones from Marvel are Canon); the 2003 Clone Wars cartoon was already superseded by the 2008 series. Some of the Legends material is making its way into the new Canon, in bits and bobs, as the writers, directors, and keepers of the new Canon see fit.

Here’s a good rundown from Wikipedia:

The best part about The Mandalorian is that it is a mashup. It’s not just a Western, but also a Samurai story. So far Lone Wolf and Cub seem to be a major inspiration. And don’t these Mandos remind you of Ronin.

I missed this comment. Sorry for the WAY late reply. Y eah – the mashup effect is cool. And The Book of Boba Fett followed the pattern, but with a new twist. I really liked the intertwining of Boba Fett and Mandalorian.