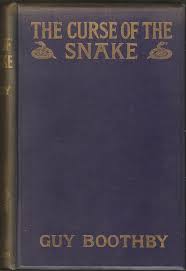 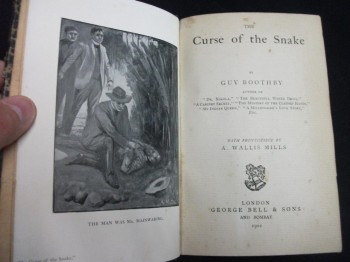 The Curse of the Snake was first published in 1902. Brian Stableford was instrumental in championing the book for republication as part of Red Herring Books’ growing catalogue of lost classics. Guy Boothby was born in Australia in 1867. The son of second generation British colonialists, his parents separated when he was seven years old and Guy was raised by his mother in England. Returning to Australia at age sixteen, he entered the colonial service as most of his father’s family had done. Of course his artistic temperament would not lay dormant for long and Boothby pursued a career writing operettas with limited success before the economic collapse of Britain’s Australian colonies in the 1890s. Boothby traveled widely throughout Asia taking jobs where he could find them. While it is likely he exaggerated some of his experiences, he was certainly a man who had seen much of the world and knew the struggle to make ends meet as his later fiction bears out. If he is to be believed, he worked extensively as a sailor, a miner in diamond mines,  a pearl diver, an amateur boxer, and as a cowboy. He was also familiar with Singapore opium dens, or at least knew first-hand accounts from other sailors. 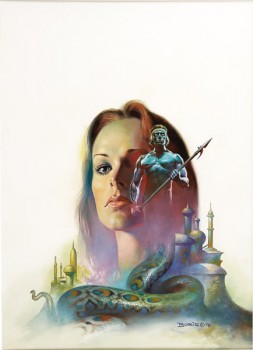 Richard Hatteras from the Dr. Nikola series appears to have been an analogue for the author and the same is true of George Wellmore in The Curse of the Snake. Both are men, like their creator, who were decent and hard-working but fell on hard times through no fault of their own and suffered greatly for a number of years. Much of Boothby’s fiction is concerned with contrasting those who walk an easy path and compromise their morals making Faustian bargains in the process with those who struggle every step of the way and do not always find relief or redemption before succumbing. While Boothby became a very successful author and was able to support a wife and three children on his writing income, he did not command respect in literary circles because he wrote sensationalist thrillers with touches of the occult and the supernatural. For his part, he made remarks suggesting his writing efforts were purely mercenary. This is almost certainly false for he imparted so much of his own life into his fiction. He is also among the first authors to suggest his villain was ruined by physical (and possibly sexual) abuse as a child. His work betrays an empathetic and sensitive soul rather than a cheap purveyor of melodrama merely plying his trade. 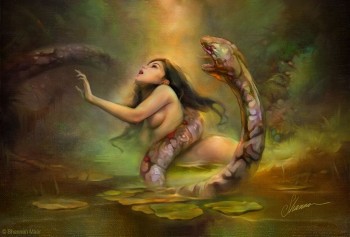 The Curse of the Snake is concerned with two school friends, George Wellmore and Richard Jeffries and how their fates are intertwined. Though both friends share various scrapes together, Richard is the one who never knows when to stop. For his part, George always believes his friend will eventually straighten up and make something of himself as one is expected to do. He isn’t surprised when Richard is expelled shortly before graduation, but he doesn’t expect it to be the start of a downward spiral for his friend either. Graduation is the start of a very different life for George as he takes the hard road of making something of himself in Australia and seizing opportunities as they come his way. He is still a relatively young man when he finds himself a successful plantation owner Down Under with every prospect of marrying the daughter of his mentor and only serious competitor. He has every expectation of reaching greater heights when a different sort of competitor comes his way with the unexpected return of Richard Jeffries to his life.

The intervening years have not been kind to Richard and he’s turned into just the sort of scoundrel one more experienced in life might have suspected. George, however, was his schoolmate and expects his wild friend would have settled down and made something of himself instead. The novel deals well with how such young men are poison to all around them. Richard Jeffries carries a wicker basket with him containing a snake that he purchased in Hong Kong. The possessor of the snake gets everything they desire, but at a terrible price. Boothby suggests it is the same serpent from the Biblical Garden of Eden story that led to the Fall of Man and the propagation of sin. A lesser writer could never pull off such a claim, but Boothby is a master of suspense and weird menace. His characters are frequently so realistic that one accepts Boothby’s most outlandish claims have at least a modicum of truth. The Curse of the Snake demonstrates how Richard Jeffries (or the serpent that controls him) brings out the worst in everyone around him and, if given half a chance, will bring everyone down with him. Most surprisingly for a Victorian author, Boothby suggests deathbed conversions from literal snakes in the grass should not be taken at face value.

Guy Boothby died suddenly of pneumonia at age 37 in 1905. I’ve been struggling with pneumonia for a week now, my first bout in four years. It doesn’t get easier with age and I find myself thinking much of Boothby, a good man with a hard life who understood the price paid for opening Pandora’s box. The Curse of the Snake was one I longed to possess for many years myself. Be careful what you wish for, as Boothby himself might have said. Boothby specialized in cautionary tales in a world that knew better. Despite its flaws, theirs was the wiser time.

Boothby created Simon Carne, ‘A Prince of Swindlers.’ Carne was a rogue hero in the vein of A.J. Raffles.