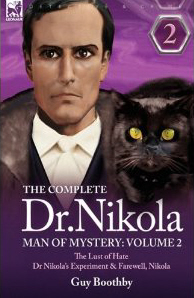 Dr. Nikola is another highly influential Victorian character who has been all but forgotten in the intervening century. The creation of Australian novelist Guy Boothby, Antonio Nikola was one of the earliest examples of a villain granted his own series. Nikola appears in five novels: A Bid for Fortune (1895), Dr. Nikola Returns (1896), The Lust of Hate (1898), Dr. Nikola’s Experiment (1899), and Farewell, Nikola (1901).

Many of the trademarks associated with later criminal geniuses begin with Nikola. Like James Bond’s nemesis Blofeld and his ever-present white Persian cat, Nikola is rarely seen without his black cat Apollyon. Fu Manchu’s pet marmoset Peko is often depicted perched on his shoulder in Sax Rohmer’s thrillers, so Apollyon is regularly described as perching on Nikola’s shoulder.

It is Fu Manchu who owes the most to Nikola. The description of Fu Manchu’s “brow like Shakespeare and face like Satan” finds a parallel in Nikola’s similarly striking features. Nikola is described as having “the Devil’s eyes.”
Even more so, Fu Manchu shares with Nikola an uncharacteristic code of honor that makes these villains somewhat sympathetic in the reader’s eye. Both villains make generous gifts to the individuals they formerly persecuted treating the entire affair as if it was merely a game.

Both Fu Manchu and Antonio Nikola are assumed names and the reader never learns the character’s true identity. Both characters employ dwarf assassins and have laboratories of lethal insects at their disposal. Finally, both Nikola and Fu Manchu studied Lamaism at a Tibetan monastery and seek an Elixir Vitae to grant them immortality. 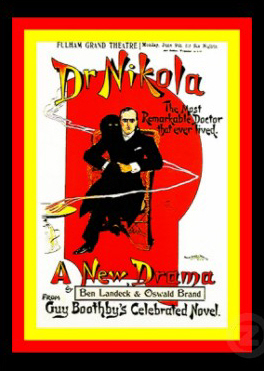 Despite these similarities, Nikola is far more than a dry run for Sax Rohmer and Ian Fleming’s criminal masterminds for his storyline is unique in that it moves from a tale of revenge to become one of redemption as the series progresses.

Nikola’s life story unravels across the five books as the narrators and the reader learn more and more about the mysterious figure whose appeal persists despite the atrocities he commits.

A Bid for Fortune is narrated by Richard Hatteras. Hatteras becomes embroiled in an international criminal empire controlled by Nikola. Hatteras first encounters Nikola’s agents, Baxter, Eastover, and Prendergast. The polyglot Nikola studied extensively in the Far East and became a student of Mesmer while in India. It is suggested that Apollyon functions as his witch’s familiar. Nikola’s chief ambition is the acquisition of a priceless Chinese walking stick that is held by a man called Wetherell. The bearer of the walking stick will be granted access to a secret Lamaserai in Tibet. This seemingly harmless curio results in multiple deaths throughout the book as various characters vie for its possession.

Dr. Nikola Returns is narrated by the adventurer, Wilfred Bruce. We learn much more of Nikola’s background and motivation in this sequel beginning with the knowledge that as a young man, Nikola’s mentor was a disgraced Oxford don who led Nikola to seek out the Chinese secret society that hold the secret of immortality. Nikola subsequently befriended a Buddhist priest and learned of the secret Tibetan monastery that was mentioned in the first book. 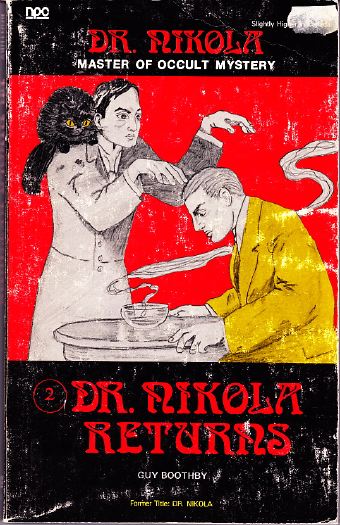 Together, Nikola and Bruce penetrate the Lamaserai and barely escape with their lives with the formula for immortality in their hands. The harrowing adventure in Tibet makes for excellent reading, but the unrelenting pursuit of Tibetan assassins on their trail ends the book with little hope the characters will survive long enough to put the formula to the test.

The Lust of Hate is narrated by Gilbert Pennethorne and is largely set in Africa at the time of native uprisings against British colonialists. We are introduced to Nikola’s manservant, the menacing deaf-mute Ah-Win as well as his menagerie of freak assassins located at his bases throughout Europe and the East. Nikola is still working towards his goal of perfecting the Elixir Vitae but is side-tracked along the way by his accidental discovery of a poison gas that presents enormous possibilities as a weapon of war in the approaching twentieth century.

Pennethorne is consumed with rage in his personal quest to exact revenge on the man who ruined him. This quickly leads him to become an agent of Nikola whose organization is filled with such men. The book is an interesting character study of one of Nikola’s minions and provides a rare inside look at Nikola’s operations. Boothby also sets up the theme of Nikola’s redemption by having Pennethorne walk the same path. 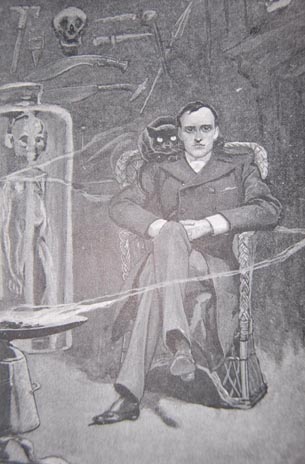 Nikola’s experimentation with reversing the effects of aging by perfecting the elixir vitae formula stolen from the Tibetan Lamaserai. The subject of Nikola’s experiments is the dying Don Miguel de Moreno. While Nikola’s experiments in restoring the Don to health and vigor succeed, it also warps his mind and turns him into a homicidal maniac. The unrelenting Tibetan assassins on Nikola’s trail also catch up with him in the explosive finale.

Farewell, Nikola brings the series full circle by bringing back Richard Hatteras as the narrator. Appropriately, it is in this book that we learn much of Nikola’s tragic past. The scion of the wealthy Revecce family, Nicola’s father died while he was a toddler and his mother remarried the Governor of Cuba unaware he was already married with a son, the future South American dictator, Don Jose de Martinos. Abandoned, Nikola and his mother slipped into abject poverty. His mother passed away before he had yet reached school age. The boy Nikola was adopted by an elderly couple who introduced the boy to the occult. His adopted parents died while he was still an adolescent and he was taken in by the cruel Governor of Cuba and his son, Nikola’s step-brother. They abused him physically and, Boothby suggests, sexually. Scarred for life, psychologically and physically, Nikola ran away from home waiting the day he could take his revenge.

Thanks to his mastery of astral projection and the ability of an adept’s astral form to travel to the past, Nikola is able to return to the sixteenth century and possess his mother’s ancestor, Admiral Francesco del Revecce when he metes out his cruel punishment on his adulterous wife and her lover. Boothby suggests here that the same sins of his ancestor are visited upon Nikola as he plots to torture and kill his sadistic half-brother.

As much as the book delves into Nikola’s past, it also ties up the many loose ends. Nikola perfects the elixir vitae with himself as the subject. He returns to the Tibetan Lamaserai to make amends and accept his punishment for transgressing their sacred laws. While the book’s climax leaves the reader expecting Nikola to be executed by the Tibetan monks, the final chapter sees the astral form of an aged Nikola traveling back in time once more to visit the late nineteenth century and the woman he loved.

It is a fitting end to a unique tale of redemption that successfully melds the Esoteric East with the more moralistic traditions of the West. The Dr. Nikola series remain as a lasting template for pulp adventures of criminal masterminds to come. There are numerous public domain copies of the five Dr. Nikola books available on Amazon or eBay. The two-volume edition from Leonaur Press is the finest avoiding the numerous typos repeated by the others and presenting all five books in an affordable, high quality set to be rediscovered by twenty-first century readers. Highly recommended.

Chimaera Publications in Australia, publishers of Aurealis magazine, have just issued a reprint of “A Bid for Fortune: Or Dr.Nikola’s Vendetta” as part of its Classic Australian SF series.

The full series is here: http://www.aurealis.com.au/