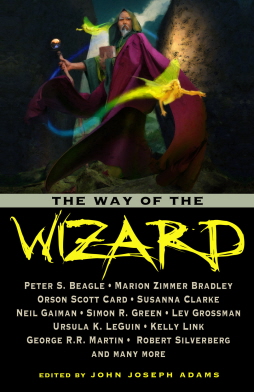 John Joseph Adams, editor of The Way of the Wizard anthology, has interviewed contributor — and Black Gate blogger and author — John R. Fultz in conjunction with the book launch:

In the cannon of classic fantasy, there are many examples of terrific wizardry, such as Fritz Leiber’s Fafhrd and the Gray Mouser tales, where Ningauble of the Seven Eyes and Sheelba of the Eyeless Face are the heroes’ patrons – mysterious inhuman wizards who watch over and protect Fafhrd and the Mouser, as well as giving them preposterous quests now and then. The tales of Clark Ashton Smith are rife with wizardry… Malygris of Susran, Namirrah of Zothique, and Evagh the Warlock, to name only a few. Nobody could build a rich, phantasmagoric world of dark wonders like Smith… Michael Moorcock’s Elric of Melnibone is one of my favorite wizards as well… Who knew a wizard could be such a bad-ass with a sword?

John R. Fultz blogs here regularly; he’s also the author of “Oblivion Is the Sweetest Wine” (Black Gate 12), “Return of the Quill” (Black Gate 13), and the upcoming “The Vintages of Dream.”

The complete interview is here.

That John R. Fultz dude is a FUN guy!

An interesting read. But, tell me, Mr O’Neill, purely as a matter of interest and entirely a propos to nothing, are there any other “Black Gate” authors who might be in “The Way of the Wizard” anthology, perhaps? Perchance? Possibly?

Are there other Black Gate authors in The Way of the Wizard? Um, I dunno. Lemme check.

Well, scanning down the TOC I see Jeffrey Ford (from BG 1), C. C. Finlay (back when he was “Charles Coleman Finlay,” in Black Gate 8), Mike Resnick (BG 3), Robert Silverberg (he blogged for us in July… does that count?), Jeremiah Tolbert (coming up in BG 15!), and…

How cool is that? I think it deserves another blog post!

Yay! Feel the love! I didn’t realise Charlie Finlay had been published in BG. Very cool, he’s a nice guy and a fine writer.

[…] The Way of the Wizard looks like a terrific book, with both classic tales of wizards from some of the best names in fantasy, and new fiction from a lot of hot new talent. The book’s website features seven “Free Reads” from Adam-Troy Castro, Jeremiah Tolbert, David Barr Kirtley, and John R. Fultz’s “The Thirteen Texts of Arthyria.” We reported on John Joseph Adams’ interview with John Fultz last month. […]

[…] short fiction has appeared in Shattered Shields, Year’s Best Weird Fiction, Volume One, The Way of the Wizard, and other fine places. His recent articles for Black Gate include a look at Darrell […]