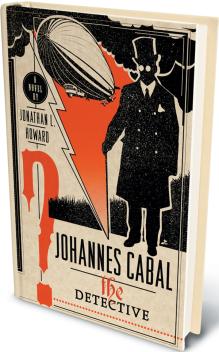 I have been asked to write a few words on how the Johannes Cabal novels came to be published with a particular view to explaining some of the intricacies of the publishing trade. Because I am nothing if not didactic (“Didactic” means, among other things, to speak in a lecturely manner. I hope you’re taking notes – there will be a test afterwards), I have also added a few notes of advice at the end for folk who want to get into the professional novel writing gig.

There is no precise moment when Johannes Cabal leapt from my brow, side, or any other part of my anatomy. He was, as is often the way, formed by a slow aggregation of assorted ideas over quite a lengthy period that probably starts sometime in the mid to late 1980s. I had and, I must admit, still have a habit of inventing stories for my own amusement with no intention of writing them down. Usually the reason for not taking it too seriously is because I’m playing with other people’s characters, and the copyright situation discourages me from making the stories concrete; virtual fanfic, if you like.

Back in 1985 I saw a film that, as a Lovecraft fan, I was all set to hate. Instead, having seen Re-Animator I came out of the cinema enthused and excited by such a gonzo approach to Lovecraft’s work. Inevitably, I started playing around with ideas for a sequel. There used to be an old vicarage in Kearsley, southwest of Bolton on the road to Manchester, that caught my eye whenever I went by. It was a tall, severe, Victorian building with a large, circular window on its attic floor, glaring out from beneath the eaves. The window made me think of a Lovecraftian tale, and I imagined a rival to Herbert West living there. Unlike West, however, he used magic upon which he had imposed a scientific rigour. Herbert West comes to him to collaborate with predictably gory results.

I never got very far with this particular story because I found myself becoming more interested in the unnamed magic-using re-animator.