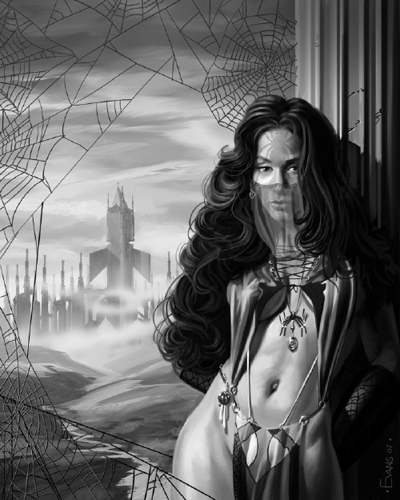 When Taizo of Narr approached the remote city of Ghoth he saw first its thirty-three towers of black basalt. The structures rose like baroque spears on the horizon, piercing the purple clouds of dusk. As the Narrian’s steed carried him closer, he surveyed the vast mass of dark webs that linked the towers like hanging bridges, obviously a product of the city’s gargantuan spiders. Once he passed through the eastern gate, Taizo found himself immersed in the domain of the holy arachnids. They scuttled along the broad avenues, up and down the sheer sides of the towers, bearing the silk-garbed nobles of Ghoth to and fro at the direction of grim, tattooed drivers. The common folk of the city greeted Taizo kindly on that day, unaware of his plan to blaspheme against their eight-legged god.

Tonight, halfway up the central spire of the Temple of the Great Mother, the foreigner clung by his fingers and toes to crevices in the dark masonry. Glancing down at the geometrical sprawl of flickering street lamps, Taizo promised himself a third time that this would be his last job.

Even now, when his mind should have been focused on the details of the perilous climb, his thoughts returned to Syyra. Lovely, dark-eyed Syyra, whose skin was the delicious brown of autumn-fired almonds, whose lips were red and sweet as the ripest berries of spring. Taizo had come to Ghoth two months ago to steal that which the city would never offer in trade or tribute, not even to the mightiest of kings. Yet it was the city that had stolen from him, and the lost object was his own heart, held now like a precious jewel about the slender neck of the Ghothian maiden. She was half Taizo’s age, a daughter of the city’s supreme caste of purebloods.

Taizo had been walking the streets near the great temple a few days after entering the city, when an elephantine arachnid lumbered by, its back-born pagoda crowded full of purebloods on their way to a ceremonial banquet. Taizo withdrew, along with the street’s crowd of busy peasants, to let the holy beast pass. Some irregularity in the cobblestones caused the humongous spider to shift its bulk abruptly, spilling Syyra from its overloaded back. If not for Taizo, she’d have hit the ground and been injured or killed. But the stranger caught her in his strong arms.

Eyes the color of night stared at him from the ruffled folds of her veil. Taizo’s hawkish nose, slender mustache and sable hair, worn long in the southern style, invoked distant empires and foreign romance. Unlike the conservative men of Ghoth, he wore golden bangles in his earlobes, a crimson scarf tied about his forehead, and a silver stud pierced his lower lip. He held her slender body a bit too long against his chest, incensed by the jasmine scent of her warm skin.

Taizo realized later that he had fallen in love in that very instant. She offered him only her name and a bow of thanks that day, rushing away to rejoin her pureblood coterie. But a series of clandestine meetings followed over the next few weeks, Syyra arranging through servants to meet with him outside the grounds of her family’s estate, and Taizo eager to taste her sweet lips.

She became an addiction for him, though the affair had to remain a secret. The purebloods of Ghoth did not have intimate relations with foreigners; their untainted bloodline was a cherished and closely guarded treasure. Yet her ardor for him was undeniable, so they loved one another in the discreet rooms of lesser-known taverns.

“My father would kill me,” she’d told him a few nights ago, “were he to know of our love.”

“He’d have to kill us both, my dear,” Taizo replied. They huddled together beneath a blanket of furs, staring at the sickle moon through a frosted window as the city slept.

“So he would,” she said. “But I would risk this and more for you, my lovely Narrian.”

He kissed her on the forehead, where the spider-shaped birthmark shared by all the purebloods sat like a dark diadem. He ran his nimble fingers through her silky black hair.

“Come away with me,” he said, hardly believing what he was asking. “We’ll build our own home together, the king and queen of our own estate.

There’s choice land to be had in the outer territories of Narr. Close enough to travel into the great city whenever we want, far enough from Ghoth to avoid the wrath of your father. We’ll give him a few years to calm down before we return to visit. Then he’ll see that you’ve become a lady of means, that I’ve given you a good life, and he’ll accept us.”

She lay her cheek against his pale chest, sighing. “What a lovely dream,” she said. “Can it be so? Have you the means to acquire such an estate? I know that you are not truly an importer of silks.”

Taizo grinned. The girl knew him so well after only three weeks, she could see through his cover. He must not tell her too much, not yet.

“In a short while, I will be one of the richest men on the continent,” he confided. “I have certain…business arrangements to take care of here in Ghoth. Then I will take you from here to honeymoon in the decadent splendor of Emeran Thah. From there, we’ll travel to Narr and secure our estate.”

This pleased her greatly, and she asked for no more details. The tightness of her grip on his skin and the urgent pressing of her lips against his exhibited her total belief in his plan. He might have told her the truth of his purpose in Ghoth if she had asked, but he was glad she did not. The less she knew about the blasphemy he was to commit, the better.

Taizo expected to enjoy a splendid retirement soon. He would raise a big family in an exquisite country estate with his young wife. But before that dream became a reality, there was tonight’s duty to attend. Tonight he would steal a grand future for himself and lovely Syyra.

Near to the top of the temple’s main tower, he climbed now among the scattered remnants of decaying webs, flapping in the night wind like the torn banners of spectral armies. Dawn was not far away, and this was his window of opportunity.

When the sun rose, a swarm of giant spiders would emerge from the portal atop the spire, crawling down into the temple courtyards where handlers would ride them into the city streets. Then, a few hours after sunset, the spiders would re-enter the temple by climbing this tower again, and descending its inside surface toward the underground warrens where they were fed and groomed.

Right now Taizo was the only creature scaling the tower, but he must complete the climb before daybreak or face the onrushing spiders on their way down. His goal lay deep below the temple, in the catacombs where the great arachnids were birthed and housed. This labyrinth could only be reached from within the temple itself, and the only unguarded entrance was the spider-portal at the tower’s summit. The irony of entering the temple by the same route as the monsters themselves, climbing up then down, was not lost on Taizo. His hands and feet were daubed in a sticky, black solution distilled from the boiled webs of the beasts, a concoction traded only to select clients on the black market. Simply possessing such a fluid would earn a death penalty here in Ghoth. The city’s rulers traded the expensive silks woven from the webs, and produced widely-available ointments and unguents from spider dung, but all other materials related to the holy arachnids were forbidden from commercial uses.

The complete version of “Oblivion Is the Sweetest Wine” appears in Black Gate 12.

11 thoughts on “Fiction Excerpt: “Oblivion Is the Sweetest Wine””