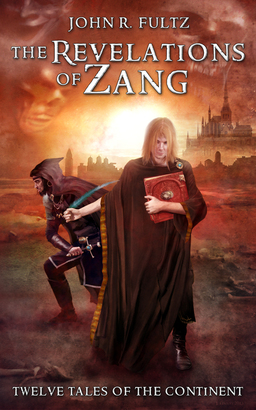 We published three stories from John R. Fultz’s baroque and fascinating sword & sorcery Zang Cycle in the print version of Black Gate: “Oblivion Is the Sweetest Wine,” featuring the famous thief Taizo and his daring heist in spider-haunted Ghoth (BG 12); “Return of the Quill,” in which Artifice’s long-simmering plan to bring revolution to the city of Narr finally unfolds (BG 13); and the prequel story “The Vintages of Dream” (BG 15). Next, John took us back in time to Artifice’s first year as a member of the travelling Glimmer Faire in “When the Glimmer Faire Came to the City of the Lonely Eye,” which appeared as part of the Black Gate Online Fiction line here in January.

Those four tales triggered an intense interest among our readers, and over the years John returned to Zang many times. He elaborated on the evolution of the saga in a recent post here on the BG blog:

Once Upon a Time in Zang… a fugitive author and a devious cutthroat began a revolt against the nine Sorcerer Kings whose power displaced the gods themselves. Like the revolt, which began in far-flung places, the Zang Cycle of stories would grow slowly and cover a lot of ground…

It all started with “The Persecution of Artifice the Quill,” in the pages of Weird Tales #340 (2006). The cover of that issue featured a horde of the faceless warlocks known as Vizarchs, who drag Artifice the Quill away in the story’s opening scene, a scene painted by the talented Les Edwards.

The story was a turning point for me: The fulfillment of a long-standing dream (getting published in Weird Tales) and the introduction of two characters I would return to many times: Artifice the Quill and Taizo the Thief.

I wrote eleven more Zang Tales and moved the series to the welcoming pages of Black Gate, where it flourished for many issues.

Now, seven years after the first story appeared in Weird Tales, the complete Zang Cycle has been collected in a new volume, The Revelations of Zang: Twelve Tales of the Continent, released by 01Publishing this summer.

The volume contains the five previously-published stories, plus seven brand new tales set in Zang, including the climax of the series, “Spilling the Blood of the World,” a 16,000-word novella.

01Publishing has made the first story, “The Persecution of Artifice the Quill,” available online as a free book preview.

Here’s the official book description for The Revelations of Zang:

A collection of dark fantasy tales with a metaphysical edge, full of grotesque wonders and weird splendor. Artifice the Quill flees from tyrant sorcerers into a world of strange magic, ancient gods, and exotic kingdoms. The exiled author joins a traveling troupe of performers known as the Glimmer Faire, where he learns the magical power of art and the art of magical power. These Twelve Tales of the Continent alternate between the exploits of Artifice and the adventures of Taizo the Rogue, a master of skullduggery who sparks a rebellion in the name of bloody vengeance. The Lost Gods of Narr were displaced a century ago by the Sorcerer Kings, a council of dictators who rule the Golden City with necromancy, alchemy, and terror. The mysterious folk of the Red Isle foster dissension in Narr by smuggling their enchanted goods into the city, while the ancient Zang Forest expands itself across the lands of men, devouring farms and towns as it reaches to smother the wicked city. Now that the Lost Gods are returning to destroy the world, only Artifice, Taizo, and a small band of rebels have any hope of preventing the apocalypse. Seven of these interrelated stories are previously unpublished, including the 16,000-word novelette “Spilling the Blood of the World,” which brings the entire Zang Cycle to a staggering finale.

The Revelations of Zang was published by 01Publishing on June 3, 2013. The cover artist is Josh Finney. It is 314 pages, priced at $4.99 for the digital version. There is no print version.

UPDATE: There is a print version of THE REVELATIONS OF ZANG in the works. It’s coming soon from Fantastic Books.

I will be sure to announce it here at BG…

Keep us posted, John. And congratulations again on the new book!

I’ll probably buy the print version when it comes out! Got the digital version and am going through it. Its really good;-) I’m about halfway through.

Great set of stories. Like in Seven Princes, there’s such a great sense of epic scale in both the world building and the forces at war.

Damn it! I need to make a start on these, they sound great!

Can’t wait to get stuck in.

[…] For more info on the collection, see the previous Black Gate posts HERE and HERE. […]