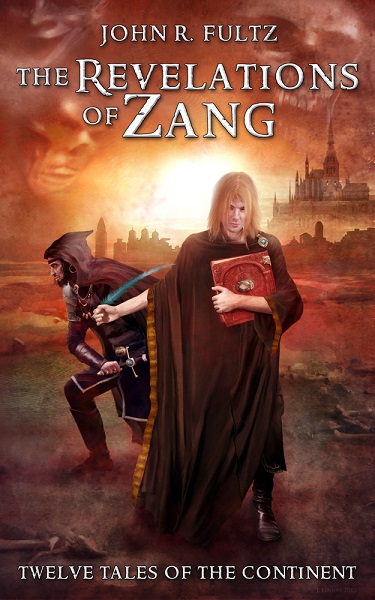 …a fugitive author and a devious cutthroat began a revolt against the nine Sorcerer Kings whose power displaced the gods themselves. Like the revolt, which began in far-flung places, the Zang Cycle of stories would grow slowly and cover a lot of ground.

Now at last the entire story cycle is complete with the publication of The Revelations of Zang on Amazon Kindle.

It all started with “The Persecution of Artifice the Quill,” in the pages of Weird Tales #340 (2006). The cover of that issue featured a horde of the faceless warlocks known as Vizarchs, who drag Artifice the Quill away in the story’s opening scene, a scene painted by the talented Les Edwards.

The story was a turning point for me: The fulfillment of a long-standing dream (getting published in Weird Tales) and the introduction of two characters I would return to many times: Artifice the Quill and Taizo the Thief.

I wrote eleven more Zang Tales and moved the series to the welcoming pages of Black Gate, where it flourished for many issues.

The first story to grab BG founder John O’Neill’s attention was “Oblivion Is the Sweetest Wine” — a tale of Taizo and his infamous heist in spider-haunted Ghoth. It ran in BG #12 (2008). I wrote one Zang story after another over a 3- to 4-year period, building toward a single climactic tale.

The cycle’s penultimate story, “Return of the Quill,” wherein Artifice finally returns to Narr and sparks a revolution, was featured in BG #13 (2009). By this time, Artifice has embraced the sorcery that he once loathed and learned to alter reality with his Great Art. He is the leader of the mystical troupe known as The Glimmer Faire.

Meanwhile, Taizo has taken his own dark journey through tragedy, sorcery, and suffering toward vengeance. These two main characters only meet twice during the cycle: Once in the first story, and once again in the last.

“The Vintages of Dream” was a prequel to the Zang Cycle. It was written years earlier and was unrelated to the stories of Artifice and Taizo. Yet it was the next of the Zang-based tales to appear in Black Gate (in Issue #15, 2011). As with the other Zang tales, BG commissioned gorgeous artwork to accompany the story. (Those images are scattered throughout this article.)

In 2012, Black Gate shifted from a print mag to an online destination for daily blogging and original fiction. One more Zang story was presented by BG on their site, “When the Glimmer Faire Came to the City of the Lonely Eye” (2013). That story skipped backward in time to Artifice’s first year as a member of the travelling Glimmer Faire.

This marked a total of five Zang Cycle stories that had been published, yet they were out of order — and several other stories remained unseen. There were “gaps” in the overarching narrative of the series.

Like Robert E. Howard’s Conan stories, they were appearing in random order; like Moorcock’s Elric tales, they were scattered and in need of a cohesive and chronological presentation. Until then, the larger story — the one that permeated each of these stories — would remain untold. There is a definite synergy that arises from a story cycle when the stories are read back-to-back. It’s not quite the same as reading the chapters of a novel, but more like watching the episodes of television or movie series.

The climax of the series, “Spilling the Blood of the World,” is a 16,000-word novella presented for the first time in The Revelations of Zang. In total, there are five previously-published tales, and SEVEN never-before-seen tales in the collection.

Here is the Table of Contents, which represents the Zang Cycle in its entirety:

THE PERSECUTION OF ARTIFICE THE QUILL
OBLIVION IS THE SWEETEST WINE
THE LIBERATION OF LADY VERONIQUE
WHEN THE GLIMMER FAIRE CAME TO THE CITY OF THE LONELY EYE
THE REBIRTH OF ZANG (THE TRAVAILS OF TREON AND TYRIEL)
THE DOOM OF THE BLACK URCHIN
THE BOUNTIFUL ESSENCE OF THE EMPTY HAND
WHAT GROWS IN THE SEASON OF SORCERY?
TREASURES OF THE PROPHET
RETURN OF THE QUILL
SPILLING THE BLOOD OF THE WORLD (novella)
Bonus Tale: THE VINTAGES OF DREAM

When I finished writing the Zang Cycle in 2006, I was free to move on to my next goal: Writing novels. And while that journey is a whole other story, it resulted in the publication of The Books of the Shaper trilogy: SEVEN PRINCES (2012) and SEVEN KINGS (2013). This December the final book in that trilogy, SEVEN SORCERERS will be released by Orbit Books.

If I hadn’t written the Zang Cycle of stories, I’m not sure I would have ever written The Books of the Shaper trilogy. I learned a lot writing these stories. I always intended to collect them into a single volume some day, and I’m glad to say that day has finally come.

Now the WHOLE story can be told.

Want a Free Copy of THE REVELATIONS OF ZANG?

I’m sending free electronic copies of the book to the first five people who respond in the comments section of this article.

Simply answer this question: What was the last great e-book you read?

(Be sure to include your e-mail address and your choice
of file format: Kindle or PDF.)

I’ll bite! The last great eBook I read was Miserere: An Autumn’s Tale by Teresa Frohock. (And I’m currently partway through the eBook of Crimson Shadows, The Best of Robert E. Howard vol. 1.)

Thanks! I loved Seven Princes and look forward to Seven Kings and Seven Sorcerers.

The last great e-book I read was a compilation of Clark Ashton Smith short stories. I hadn’t had much exposure to Smith before reading through the omnibus, so it was a real treat – he’s definitely my favorite Mythos writer now, on account of actually having a sense of humor.

Also, this finally got me to register for Black Gate, which I’d been putting off doing for quite some time.

The last great e-book I read was Dr. Phibes by William Goldstein. Very different in tone from the film, it’s still a dynamite pulp adventure. Planning to read the two sequels this summer. Fletchav@gmail.com(kindle, please)

Thanks guys–enjoy THE REVELATIONS OF ZANG.

My last great e-read was RED COUNTRY by Joe Abercrombie. Quite good, even if it didn’t quite live up to the standard he set with THE HEROES.

Your Zang stories sound very atmospheric and intriguing, perfect for a summer vacation read. I’m looking forward to being transported!

Thanks and continued good luck with your writing!

One more free copy of the book left!!!!

The last great ebook I read was Lord Dunsany’s “The Fortress Unvanquishable Save for Sacnoth.” It’s such an odd combination of lapidary visual detail and flat characterization. They don’t make ’em like they used to, that’s for sure.

Wow, that was fast–five great responses, five winners, in less than an hour.

Congrats to all! See you in Zang…

I missed this, was between things I had to do, but I bought it from Kindle. Read lots from Kindle these days.

I like it but I’m still going through the first story. I’m getting the impression you are making a Zothique, or is it just some fantasy world?

But I do like this book! I’ll give it a good rating on Kindle soon.

This isn’t Zothique, it’s the Continent of Zang. It’s the first fully-realized fantasy world that I created via fiction, and I did it by writing this cycle of stories. However, I have to acknowledge my big Clark Ashton Smith influence–he’s one of my favorite writers. Someone else said this story reminded them of Jack Vance’s “Dying Earth” stuff–which I took as a compliment. Writers can never avoid their influences. I guess you could say this story cycle represents the “First Phase” of my writing career. (The second phase being the BOOKS OF THE SHAPER Trilogy.)
Glad you’re digging the stories–thanks for reading!

[…] the years John returned to Zang many times. He elaborated on the evolution of the saga in a recent post here on the BG […]

[…] more info on the collection, see the previous BLACK GATE posts HERE and […]

[…] be contained just in novels — on June 3, 2013, 01Publishing published his first collection The Revelations of Zang, gathering his baroque and fascinating sword & sorcery Zang Cycle, featuring the tale of a […]

[…] John’s short fiction has appeared in Shattered Shields, Year’s Best Weird Fiction, Volume One, The Way of the Wizard, and other fine places. His recent articles for Black Gate include a look at Darrell Schweitzer’s upcoming Cthulhu Mythos anthology That Is Not Dead, an interview with GnomeSaga author Kenny Soward, and a peek behind the scenes at his first collection, The Revelations of Zang. […]