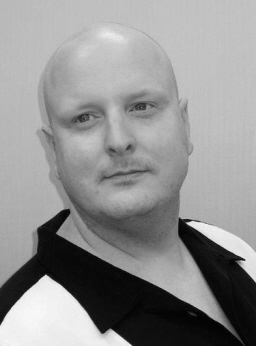 The great playwright Artifice the Quill, who freed the city of Narr from the grip of the dread Sorcerer Kings with but a single performance in “Return of the Quill” (Black Gate 13), returns in a tale of magic, mystery, and the power of performance:

The haunted city lay sleeping at the feet of the mountains, a gray collection of antique architecture encircled by a granite wall. A monolith rose from its central plaza, crowned by a crimson orb that refracted starlight, painting the streets with bloody shadow. Pale ghosts wandered along the avenues, silver phantasms gliding through vermilion, while the living stayed locked inside their shuttered houses.

Three brightly canopied wagons descended the ancient road to Mornitetra. Artifice sat on the driver’s bench of the lead wagon. As the confining walls of the mountain pass fell behind, he looked down upon the shunned city at last. He watched spectral shapes swim through the avenues.

What would the ghosts think of his play?

John’s first first story for Black Gate was “Oblivion is the Sweetest Wine” in Black Gate 12, a classic sword-and-sorcery tale of spider-haunted towers and a terrifying secret. His contributions to our pages also include “Return of the Quill” (in BG 13) and “The Vintages of Dream” (BG 15).

His epic fantasy novel Seven Princes is available from Orbit Books. Seven Kings, the second book of the Shaper Trilogy, will be released on Jan. 15, with the concluding volume, Seven Sorcerers, coming in Jan. 2014. Read an exclusive chapter from Seven Kings here.

“When the Glimmer Faire Came to the City of the Lonely Eye” is a complete 6,800-word novelette of heroic fantasy offered at no cost.

[…] and speaking of talented writers, you should go read John Fultz’s latest piece (for free) over at Black […]

[…] This Tuesday the book drops in the U.S., U.K., and Australia. While you’re waiting for the novel, hop over to Black Gate and read my story “When the Glimmer Faire Came To the City of the Lonely Eye.” […]

[…] John published three highly acclaimed short stories appear in the print incarnation of Black Gate: “Oblivion Is the Sweetest Wine” (BG 12), “Return of the Quill” (BG 13), and “The Vintages of Dream” (BG 15). He was this week’s featured writer in our Black Gate Online Fiction line with his sword & sorcery tale, “When the Glimmer Faire Came to the City of the Lonely Eye,” available free online here. […]

[…] & sorcery story “When the Glimmer Faire Came to the City of the Lonely Eye,” published right here back in January as part of our Black Gate Online Fiction line. Or try the complete first chapter of […]

Black Gate » Blog Archive » Once Upon a Time in Zang…

[…] daily blogging and original fiction. One more Zang story was presented by BG on their site, “When the Glimmer Faire Came to the City of the Lonely Eye” (2013). That story skipped backward in time to Artifice’s first year as a member of […]

[…] took us back in time to Artifice’s first year as a member of the travelling Glimmer Faire in “When the Glimmer Faire Came to the City of the Lonely Eye,” which appeared as part of the Black Gate Online Fiction line here in […]