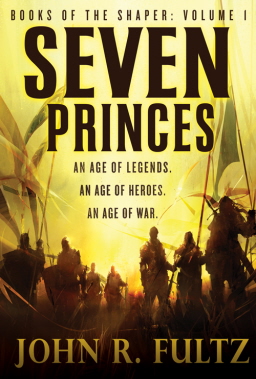 Here at the rooftop headquarters of Black Gate, overlooking the majestic Chicago skyline, we’ve been looking forward to this day for a long time: the day the first volume of John R. Fultz’s Books of the Shaper series finally hits bookstores.

Seven Princes is John’s first novel.  He’s had three highly acclaimed short stories appear in Black Gate — including “Oblivion Is the Sweetest Wine” (BG 12), “Return of the Quill” (BG 13), and “The Vintages of Dream” (BG 15),  — and has published short fiction in Weird Tales, Space & Time, Lightspeed, and the anthologies Way of the Wizard and Cthulhu’s Reign. Here’s the cover blurb:

It is an Age of Legends. Under the watchful eye of the Giants, the kingdoms of Men rose to power. Now, the Giant-King has slain the last of the Serpents and ushered in an era of untold peace and prosperity. Where a fire-blackened desert once stood, golden cities flourish in verdant fields.

It is an Age of Heroes. But the realms of Man face a new threat — an ancient sorcerer slaughters the rightful King of Yaskatha before the unbelieving eyes of his son, young Prince D’zan. With the Giant-King lost to a mysterious doom, it seems that no one has the power to stop the coming storm.

It is an Age of War. The fugitive Prince seeks allies across the realms of Men and Giants to liberate his father’s stolen kingdom. Six foreign Princes are tied to his fate. Only one thing is certain: War is coming.

For those lucky enough to be in San Francisco this Saturday, John will be doing his first signing at Borderlands Books. Bring your copy of Seven Princes and meet one of the rising stars of fantasy.

This book rocks, and for any who would like to say S&S is dead, I dare you to read this and not rethink your words. Well done John!

Thanks John and Scott! The day has finally arrived…let the Princes go forth!

Unless I missed it somewhere, I didn’t see who John’s publisher is, whether the book is an hc, trade paperback, or paperback, and how much it costs. I’d like to know, please.

It’s interesting that the book is hitting stores today where you are, John. It’s been on the shelf in Lubbock for at least a week, maybe two.

Congrats, John, and best of luck with it!

I’ve been a fan since “IronSpell” and since I saw this at my local B&N I picked it up! I’ll read it soon.

I loved the “thirteen texts of Arthyria” so much that i went and picked this up, although i probably won’t get to this for awhile.

[…] Fultz’s first novel, Seven Princes, has been on sale less than two weeks and already it’s shaking the walls of the literary establishment, getting […]

[…] We were proud to offer readers the complete first chapter of Seven Kings right here last month. You can read our announcement on Seven Princes here. […]

[…] Seven Princes, the first book in the series, arrived in January 2012, it marked the debut of a major new fantasy […]