Almost exactly a month ago I wrote about a trio of military/adventure science fiction anthologies edited by Joe Haldeman, Charles G. Waugh, and Martin Harry Greenberg, and published by Ace Books between 1986-88: Body Armor: 2000, Supertanks, and Space Fighters. Today they’re called the Tomorrow’s Warfare trilogy, and they’re a fun and collectible set of vintage paperbacks well worth tracking down, especially if you enjoy 80s-vintage military/adventure fantasy or are even remotely curious about 80s science fiction in general. Check out all the details here.

Haldeman did no further books with Waugh and Greenberg. But I suspect the three he did were fairly successful, as scarcely a year later David Drake picked up the reins and produced three books with them in the exact same vein:

These are loosely referred to as the Space anthologies (by me, anyway), and they followed the same formula as the previous titles, with stories from the most popular writers of the day including a Retief novella by Keith Laumer, a Dorsai tale by Gordon R. Dickson, a Magnus Ridolph novelette by Jack Vance, a Falkenberg’s Legion story by Jerry Pournelle, a Hammer’s Slammers novelette by David Drake, a Thousand Worlds tale by George R. R. Martin, plus the Hugo-award winning “Allamagoosa” by Eric Frank Russell, the classic “Arena” by Fredric Brown (inspiration for the famed Star Trek episode of the same name), and fiction by Isaac Asimov, Brian W. Aldiss, Arthur C. Clarke, Fritz Leiber, Joe Haldeman, Poul Anderson, Algis Budrys, Jack Williamson, Michael Shaara, Mack Reynolds, C. M. Kornbluth, and many others.

Back covers for Space Gladiators, Space Infantry, and Space Dreadnoughts

Here’s the complete TOC for Space Gladiators, which includes three long novellas — a Retief tale by Laumer, a United Planets story by Mack Reynolds, and “The Dueling Machine” by Ben Bova and Myron R. Lewis — plus a Magnus Ridolph novelette by Jack Vance, and the classic pulp adventure “Arena” by Fredric Brown.

“Arena” is one of the most famous stories to appear in Astounding. It’s been adapted many times, most famously as the classic Star Trek episode featuring the Gorn.

“Arena” was also gorgeously adapted by Gerry Conway, John Buscema, and Dick Giordano for the fourth issue of Marvel Comics World Unknown, a short-lived magazine that retold classic SF short stories. Read the entire adaption at Diversions of the Groovy Kind — trust me, you’ll be glad you did. 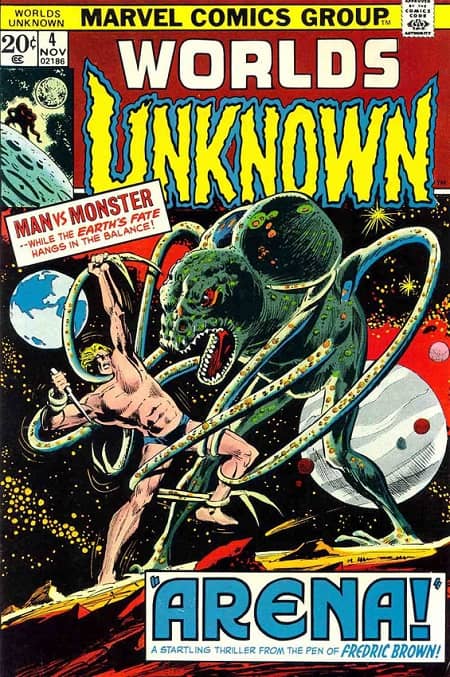 You can read more about Fredric Brown, and the strange tale of how “Arena” came to be a Star Trek episode here.

As long as we’re talking about stories that ended up in strange places, the Bova and Lewis novella “The Dueling Machine” was eventually expanded into a novel of the same name by Ben Bova — though with no mention of Lewis in this version. 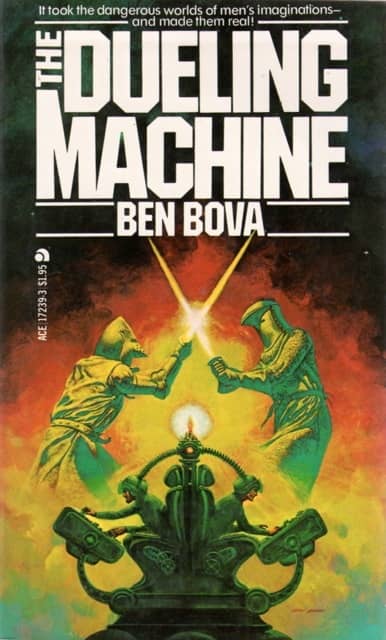 If you’re like I was in the 80s, reading anthologies like this will eventually make you curious about the magazines where the stories originally appeared. To whet your curiously even further, here’s a sampling of four of them.

The previous anthologies in this series, edited by Haldeman, Waugh. and Greenberg, are also well worth a look. See the complete details in my last article here.

Just like Joe Haldeman before him, David Drake edited three anthologies in the series with Waugh and Greenberg, and then called it a day. He did one final anthology with his two collaborators the same year Space Dreadnaughts appeared (The Eternal City, Baen, 1990), but that was the last of them.

Waugh and Greenberg seemed to know they were on to a good thing however, and continued the Space anthology series with one more volume at Ace. Space Dogfights, co-edited by Algis Budrys in 1992, seemed like the logical next idea in the series. It contained some good stuff, including no less than three Nebula nominees: “Against the Lafayette Escadrille” by Gene Wolfe, “Custer’s Last Jump” by Steven Utley and Howard Waldrop, and the novella “Hawk Among the Sparrows” by Dean McLaughlin, plus a Michaelmas tale by Algis Budrys and “Night of the Vampyres” by George R. R. Martin.

Introduction by Gordon R. Dickson
“Night of the Vampyres” by George R. R. Martin (Amazing Science Fiction, May 1975)
“In the Wind” by Glen Cook (Tomorrow Today, 1975)
“The Nuptial Flight of Warbirds” by Algis Budrys (Analog Science Fiction/Science Fact, May 1978)
“Time of War” by Mack Reynolds (If, November 1965)
“Against the Lafayette Escadrille” by Gene Wolfe (Again, Dangerous Visions, 1972)
“Hawk Among the Sparrows” by Dean McLaughlin (Analog Science Fiction/Science Fact, July 1968)
“Custer’s Last Jump” by Steven Utley and Howard Waldrop (Universe 6, 1976)
“A Little Night Flying” by Bob Shaw (Worlds of If, July-August 1974)

Interestingly, these books weren’t the only anthologies with the word Space in the title produced by Waugh and Greenberg. Back in 1986 they’d partnered with Poul Anderson to create Time Wars; two years later they produced a companion volume titled Space Wars. Both were published in paperback by Tor. These are fine anthologies and well worth a look, but they’re not part of the Ace Space anthology series. 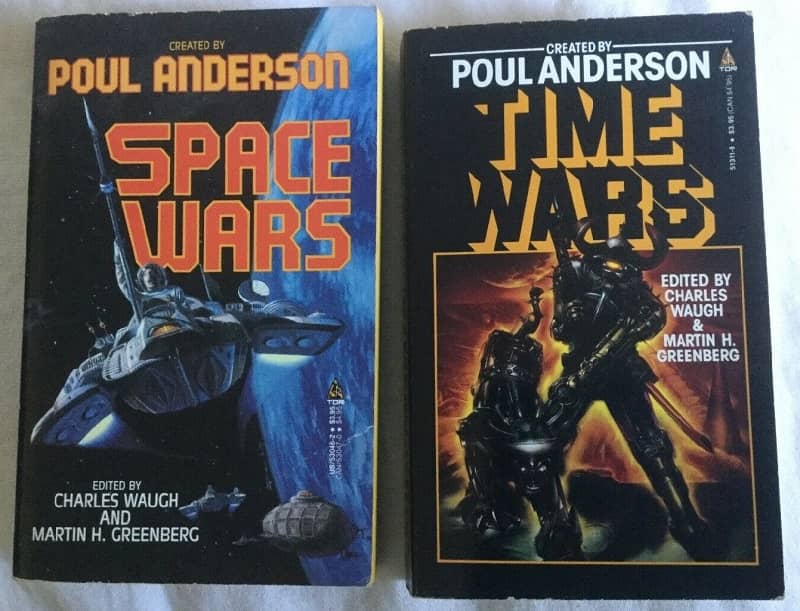 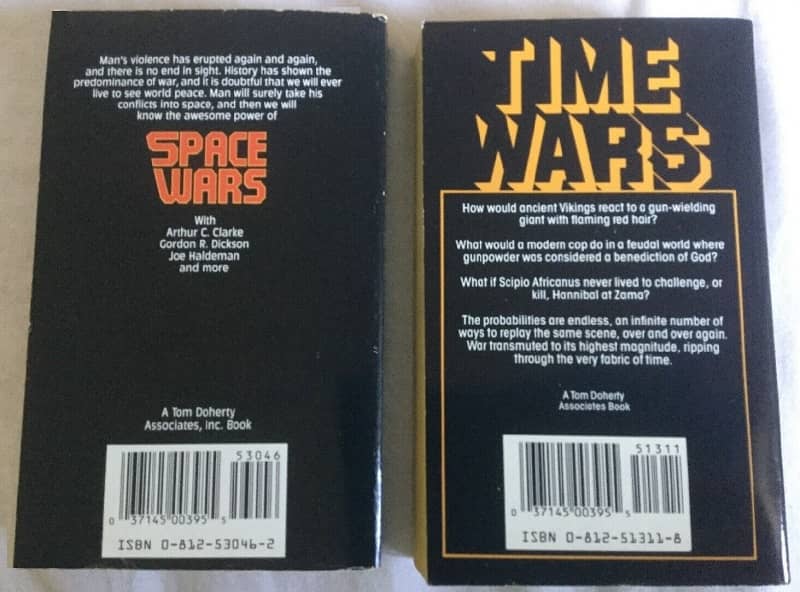 All four were published by Ace Books. See my November article on the first three titles in the series, edited with Joe Haldeman, here

I wonder what percentage of all speculative anthologies in the 80’s, 90’s and 00’s were edited (whole or partly) by Martin Greenberg.

I didn’t read those anthologies but they look cool.

I read mostly ebooks now. it is a shame that royalties problems keep classic anthologies from be issued as ebooks. I purchased Sword Against Darkness edited by Andrew Offutt for my Kindle last year. I have no idea how that was able to be released.

I had no idea there was a digital version of SWORDS AGAINST DARKNESS. That’s a major service to S&S fans, for sure.

It looks like it came out in 2017 from Endeavour Venture, which was four years after Offut died. No idea how the publisher obtained the rights to do it.

The ebook version of Swords Against Darkness makes it looks like it is a book by Robert E. Howard. Andrew Offutt is not mentioned as the editor on the cover or even in the book. Which is sad.

I hope his estate and the other contributors are receiving royalties (however scant) from the book.

Yikes! That’s not a good sign. I wonder if it’s even a legit version?

On the first page (after the title page) has this ”

Robert E. Howard has asserted his rights under the Copyright, Design and Patents Act, 1988, to be identified as the author of this work.

This edition published in 2017 by Venture Press, an imprint of Endeavour Press Ltd.”

I seriously doubt if REH asserted any such thing.

You’re absolutely right. The true table of contents for Swords Against Darkness is:

Foreword by Andrew J. Offutt
“Nekht Semerkeht” by Robert E. Howard and Andrew J. Offutt
“The Tale of Hauk” by Poul Anderson
“The Smile of Oisia” by Geo. W. Proctor
“Pride of the Fleet” by Bruce Jones
“Straggler from Atlantis” by Manly Wade Wellman
“The Ring of Set” by Richard L. Tierney
“Largarut’s Bane” by Raul Garcia Capella
“Dragons’ Teeth” by David Drake
“The Sustenance of Hoak” by Ramsey Campbell

However, the Endeavor Press Kindle version was apparently created to capitalize on Howard’s name, and is dressed up to make it look like the entire book is by Robert E. Howard. Howard’s name is the only one on the cover, and every other name (including Offutt) has been completely stripped from the Table of Contents.

Here’s a snapshot of the TOC (taken using Amazon’s “Look Inside” feature): 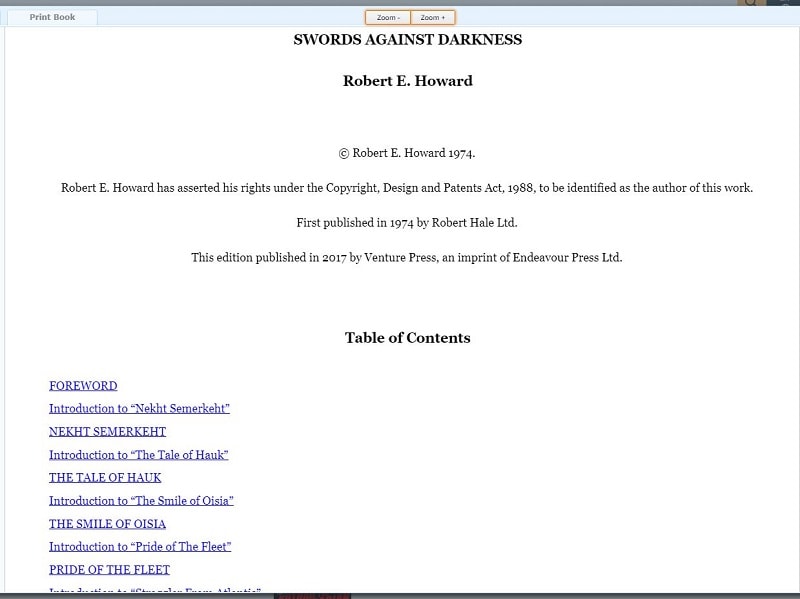 This is appalling. I hope no Black Gate readers support this version.

I really doubt this is a legit version. It just looks shady especially the lack of copyright notices for the other stories.