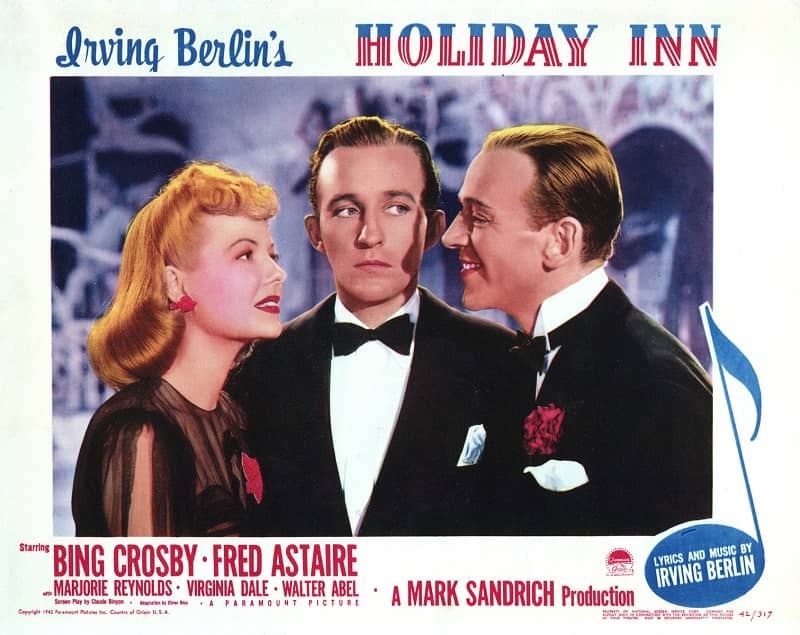 Someone told me once, “Life is short but art is forever,” which I took to mean that art has no “sell by” date on it. If the art is beautifully rendered, it will always be beautiful and universal, but that’s not true, I’m afraid. Art can have a “sell by” date on it because time changes the window through which we view art.

Time’s cruelty demonstrated itself to me recently when I rewatched the classic Bing Crosby and Fred Astaire musical, Holiday Inn. There was a time when I loved Holiday Inn without reservation. It’s the only musical I know where the singing and dancing don’t seem grafted on to the story. Because it’s a tale of a song and dance partnership, the music arises spontaneously from the plot, and like all good musicals, the music also advances the plot. And what a combination of talent! Bing Crosby, arguably one of the best crooners of all time, teamed with Fred Astaire, a legendary dancer. Mikhaile Baryshinikov said of Astaire, “It’s no secret we hate him. He gives us complexes because he’s too perfect. His perfection is an absurdity.”

Besides, Holiday Inn introduced “White Christmas” to the world.

But time has done its work. As much as I love Holiday Inn, I’m finding it harder and harder to overlook the casual racial stereotypes baked into the structure. If you’ve seen it, you know what I’m talking about, starting with the black “nanny” housekeeper to the cringe-worthy black face routine to celebrate Lincoln’s birthday.

I wouldn’t show it to a classroom of students without a long, apologetic explanation of how Holiday Inn is an artifact of its time, and how audiences (at least the white ones) in 1942 would have viewed it quite differently.

See, time has changed the art. This is true for science fiction and fantasy too. An obvious example would be the reexamination of H.P. Lovecraft’s work, but other writers are suffering. A modern audience wouldn’t read Edgar Rice Burroughs the way I did in the 60s, and Robert Heinlein’s juveniles aren’t nearly as appropriate to introduce youngsters to science fiction as they once were.

This is a roundabout way to introduce two stories that worked for me that I’m afraid will lose their impact over time. 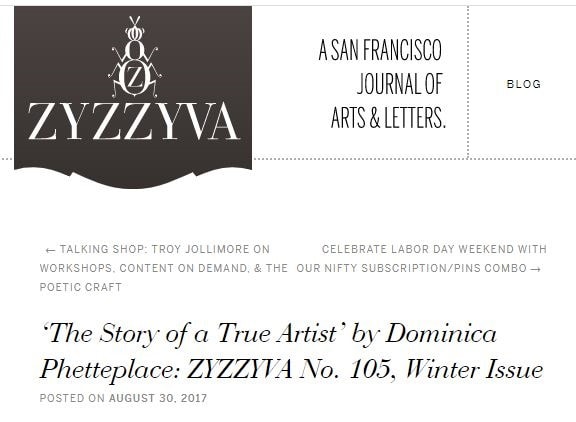 The first, Dominica Phetteplace’s Pushcart prize winning “The Story of a True Artist” appeared in ZYZZYVA in 2015. Its barely the-day-after-tomorrow plot describes the relationship between high school friends, Cam and Lo who work together producing YouTube videos.

But “The Story of a True Artist” functions on so many levels that a plot summary captures almost none of what is going on in the piece. The story dances with the weird intersection between art and the real world (whatever that is), the perceived artist and the person behind them, performance and authenticity, and it is a penetrating dive into Internet culture, instant fame and how ephemeral fame can be. At the same time, Phetteplace does what I think all great writers do, she reveals the human condition.

The story is so topical, though, that I think it will be unreadable in ten years. That’s the danger of responding with such laser like intensity to the zeitgeist. Future audiences may have no idea of what to make of Phetteplace here. Thank goodness we are reading in a time where her extraordinary work is piercingly relevant.

By the way, when you read “The Story of a True Artist,” make sure you look up Marina Abramovic. She adds a lot to the story, especially when you ask yourself, WWMAD?

You can also read the complete at Curious Fictions.

The second story, Barbara Krasnoff’s “An Awfully Big Adventure” appeared as part of her collection The History of Soul 2065, and is reprinted at Mythic Delirium.

Five-year-old Ben Weissbaum is sitting in the living room with his parents in 1962 as the Cuban missile crisis unfolds on their television. He doesn’t understand exactly what is going on, but he senses his parents’ unease, and he truly becomes frightened when his father who always understood everything answered Ben’s question, “Papa, is there going to be a war?” with “I don’t know.”

From there, the story moves into Ben’s bedroom as he tries to go to sleep. Things turn to the fantastic as the story connects Ben to his relatives, the past and future, the Holocaust, and a surprisingly mature assessment of human nature. His awfully big adventure asks a lot of him. It reminded me that a five-year old faces doubts and challenges just as Earth shattering as they are to a thirty-year old or someone who is sixty. Being young doesn’t make problems trivial, at least to the person experiencing them.

“An Awfully Big Adventure” works because the author believably creates a young point of view who struggles with questions that we all face. Ben becomes the vehicle to carry the story’s weighty concerns.

I was eight years old in 1962. My parents came of age during WWII. For me, a story with references to the Holocaust and an evocation of Cold War fears digs deep into my background. As those historical events drift farther and farther into our collective past, this story will probably fade in impact.

That’s okay, though. Specific pieces of art may not be forever, especially the ones that are written for us right now. We are now and so are they. We should enjoy the moment.

James Van Pelt lives in western Colorado. He has published five collections of short fiction — including Strangers and Beggars (2002), The Last of the O-Forms & Other Stories (2005), and The Experience Arcade and Other Stories (2017) — and two novels, Summer of the Apocalypse (2006) and Pandora’s Gun (2015), all with Fairwood Press. His last Stories That Work article for us looked at stories from The New Voices of Science Fiction.