I’ve covered a few noteworthy anthologies here in the last few weeks, including Isaac Asimov’s surprising Tin Stars, and Donald A. Wollheim’s excellent 1989 Annual World’s Best SF. It’s sharpened my appetite for good anthologies, and when I found Nebula Award Stories 17 in a small collection of vintage paperbacks I bought in eBay last month, I knew I’d found my next weekend read.

The Nebula Awards anthologies have been published continuously for over five decades, ever since Damon Knight launched the series in 1966 to raise money to fund the Nebula Awards for the Science Fiction Writers of America. Volume 17 was the first (and only) one to be edited by Joe Haldeman, who by then had won a Nebula for his groundbreaking novel The Forever War (1975), and would win it again for the novella “The Hemingway Hoax” (1990), the short story “Graves” (1993), and the novels Forever Peace (1998) and Camouflage (2004).

Nebula Award Story 17 appeared in hardcover in 1983, but wasn’t published in paperback by Ace until 1985. It contains stories still remembered warmly today, including William Gibson’s “Johnny Mnemonic,” made into a Keanu Reeves film in 1995, Poul Anderson’s Hugo and Nebula-award willing novella “The Saturn Game,” Michael Bishop’s Hugo and Nebula nominee “The Quickening,” an excerpt from Gene Wolfe’s classic novel The Claw of the Conciliator, and a lot more. There are two stories from Terry Carr’s Universe 11, two each from Omni and F&SF, and the rest from magazines and anthologies like Asimov’s SF, Analog, and More Wandering Stars. Here’s the complete TOC, and a look at some of the magazines the stories originally appeared in.

The Nebula anthologies (now called the Nebula Awards Showcase) are still published today. We covered the most recent, Volume 54, edited by Nibedita Sen, in December. Our previous coverage includes:

I bought my copy of Nebula Award Stories 17 as part of a collection of a dozen vintage paperbacks on eBay in December. A nice set of books for $16, about $1.30 per book. 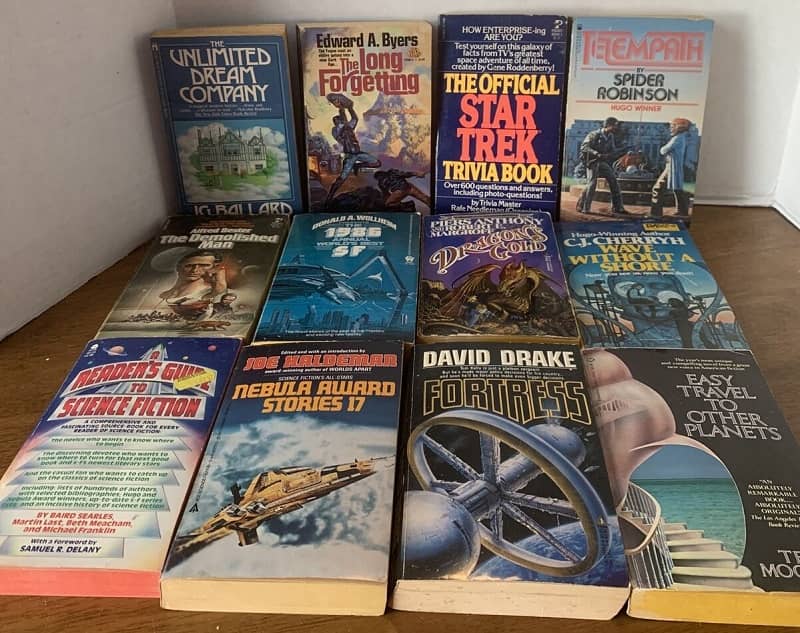 The lot of 12 vintage SF paperbacks I bought for $16 on eBay, including Nebula Award Stories 17

Nebula Awards Stories 17 was published by Ace Books in June, 1985. It is 291 pages, priced at $3.50 in paperback. It has never been reprinted, and there is no digital edtion. The cover is by Jeffrey Ridge.