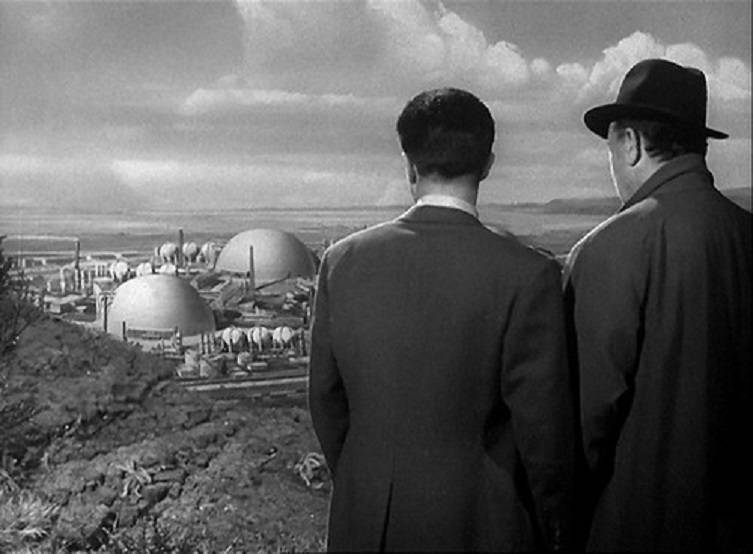 We start with two high-quality Brit flicks, both early excursions into SF by Hammer, segue to two related films of somewhat more dubious quality, and finish with the Stinker of the Month. Be sure to read to the end for the details of the first ever 19 Movies Giveaway.

The second in the Quatermass series (hence the alternative title), wherein Brian Dunlevy again grumps his way through the Quatermass role. This time around he takes on an alien hive-mind that’s hellbent on turning the world into a giant slime pit.

Not only is this an excellent early Hammer effort, it’s arguably the best ‘50’s British SF film and the best of the ‘50’s blob movies. This time the aliens want our planet, but first they have to un-Terraform it, and they’ve insidiously infiltrated British government and society to do so. Hammer aficionados will recognize a young Michael Ripper in a small role. 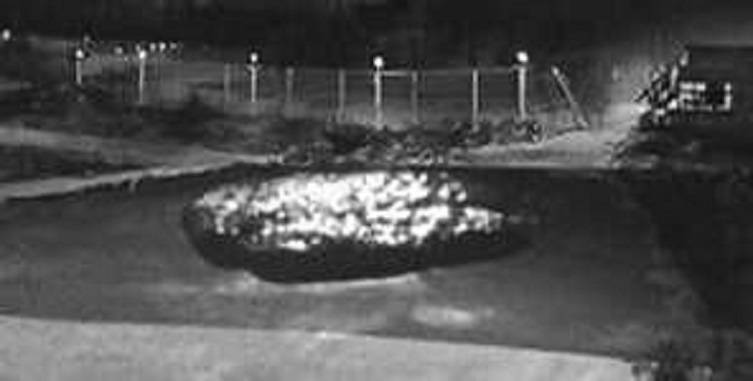 Our second Brit film is also a good earlyish Hammer effort with Dean Jaegger as an action hero (sort of) confronting radioactive creatures from the center of the Earth. It’s also a blob movie, and one of the best, though we’re cheated by the scene where the blob is about to attack a packed church but the action suddenly shifts elsewhere.

The blob-killing device is miraculously cobbled together off-screen in the film’s last fifteen minutes and it ends on a limp note, negating some of the real tension it built up earlier. 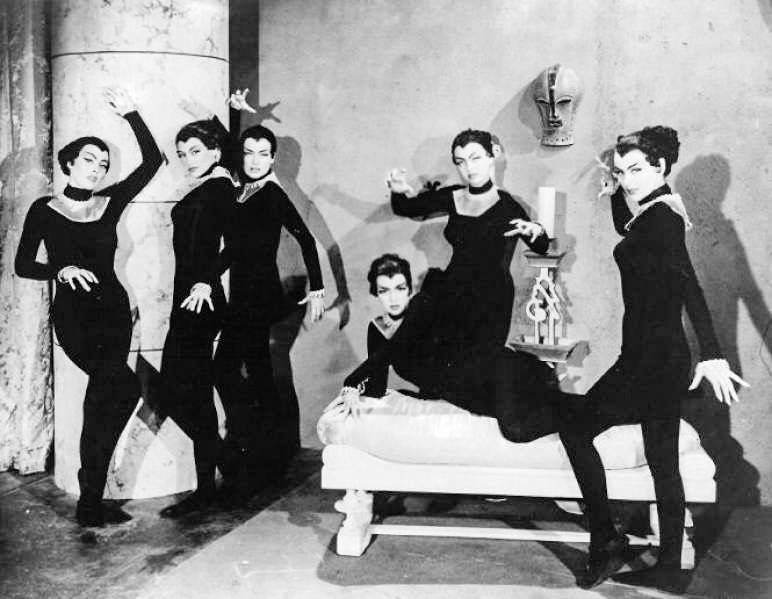 Along with Plan Nine From Outer Space, this is one of the two best bad SF films of the 1950s, highly recommended for those with a fondness for the ridiculous. A five person crew, including a female navigator, is headed for the moon in a rocket ship whose control room has corrugated fiberglass walls and wheeled office chairs.

Among the crew are commander Sonny Tufts, aforementioned navigator Marie Windsor (known as “Queen of the B’s” for her frequent appearances in noir and western films) and versatile veteran Victor Jory. Jory and Windsor do the best they can with a script that is alternately over-wrought and tedious. Tufts is one of the worst actors I’ve ever seen, mumbling his lines and repeatedly going to his signature gesture, grabbing his belt with both hands while declaiming with an unwaveringly dead-pan expression.

While on the way to the Moon it becomes clear that Windsor is under some kind of alien influence as she inexplicable orders them to land in a specific spot and leads them to a cave where they encounter oxygen (and immediately remove and abandon their space suits), a giant spider (by ‘50’s Big Bug Movie standards it’s actually rather moderately-sized), and, finally, the black unitard-clad titular Cat-Women played by the “Hollywood Cover Girls,” who go by such alien names as Alpha, Beta, and Lambda, are telepathic, and can teleport, and are moderately skillful in modern dance. 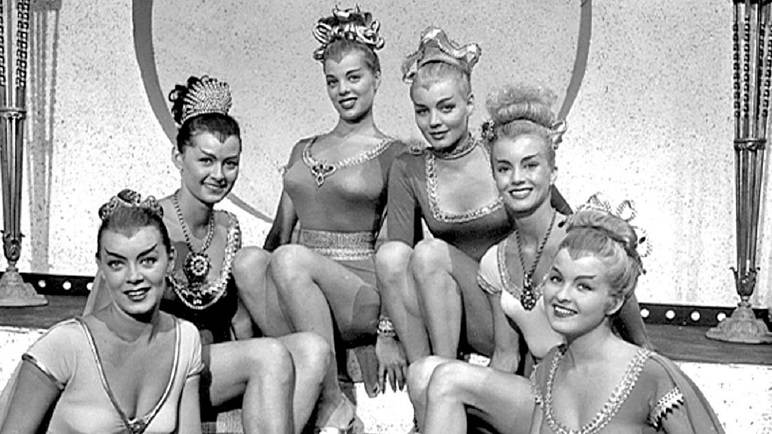 Astor Pictures apparently liked CAT WOMEN ON THE MOON so much that they re-made it five years later as MISSILE TO THE MOON, but despite the fact that virtually everything about the remake is better than the original (admittedly, a low bar), the original is vastly more entertaining.

This time around a Heinleinesque rocket designer threatened with government take-over of his personal space program decides to blast off to the moon with two escapees from a juvenile detention farm for his crew, which does call into question his capacity for rational decision making. His partner and his partner’s girl friend also go along for the ride. The rocket builder gets conked on the head when a piece of equipment falls off a shelf and dies, but not before uttering mysterious statements suggesting he isn’t exactly what he seems.

When they hit the lunar surface and go out for a walk, you can clearly see their necks through the gap between their helmet and suit, which would seem to be a rather critical design flaw. Rock creatures resembling Gumby on steroids attack and they head for a cave where they discover an unconvincing giant, spider (reprising its role from CAT-WOMEN), and a female only civilization with “International Beauty Contest Winners” replacing the “Hollywood Cover Girls” in more intricate costumes. Although some of the Moon Beauties retain their names from the original script (Alpha, Lambda), other names, much like their costumes, are more intricate and imaginative (The Ledo, Zema). The acting, while not exactly Oscar worthy, doesn’t descend to Tuftian levels of inadequacy. 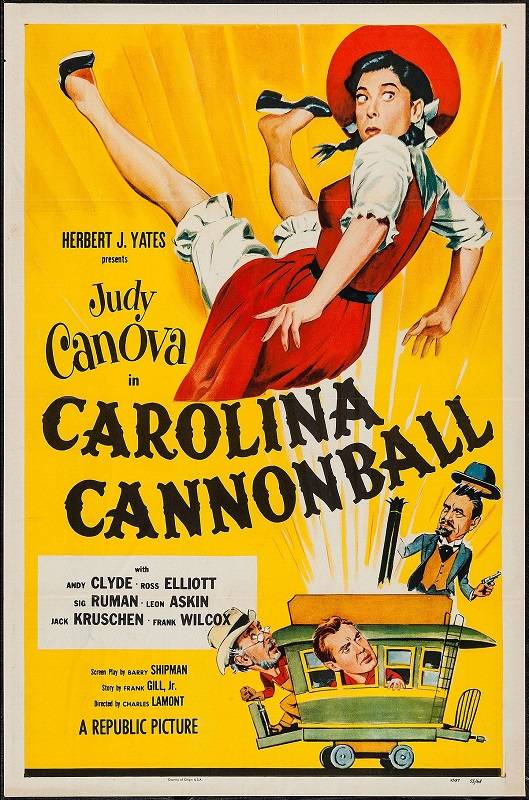 Corn-pone queen Judy Canova plays Judy Canova in the last of the Judy Carnova starring vehicles wherein a nuclear missile lands in the Nevada desert where local yokels Judy Canova and her grampa incorporate it into their steam-powered locomotive, thus making it atomic powered. This enables Judy Canova to power light bulbs by walking near them.

My combo DVD-VHS player just rolled craps, and I’ve decided to give up on the dying VHS technology. Also, the house is pretty cluttered. Not that getting rid of a VHS tape is going to make a big difference, but it’s a start. So I’ll pass along my VHS copy of Carolina Cannonball to the first commentator who requests it. Recommended only for the insatiably curious, someone trying to complete a collection of 1950’s SF films, lovers of bad movies, or Judy Canova fans.

19 1950’s SF Movies To Help Get You Through the Next Few Weeks
Son of 19 Movies: The Good, the Bad, and the Weird Edition
19 Movies Visits the Land of the Rising Sun
19 Movies Goes to the Movies with Perry Rhodan
19 Movies Looks at Mexican Horror Films of the 1950’s-1960’s
19 Movies Presents 13 Lucky Movies for Halloween Viewing
19 Movies Presents A Welcome To 2021 Mini-Concert For Your Listening Pleasure
19 Movies Returns to 1950s Vintage SF

John Jos. Miller’s latest publication is: “An Annotated Long Night at the Palmer House.”  Next up: “A Ghost of a Smile” in Best of Dream Forge and Space and Time Magazines. April, 2021. Uproar Books, e-pub and TPB. See: www.facebook.com/john.j.miller.9883

Thanks for dropping by. Sure you don’t want GAROLINA THUNDERBALL?

Well, didn’t even come close, there.