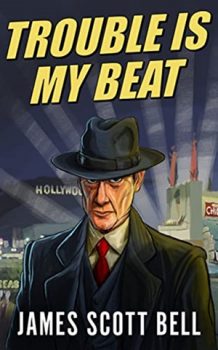 Wally Conger and I chat on FB about our common interests in books, movies, and TV/streaming shows. We’re even co-Admins on a FB group dedicated to hardboiled/noir, and another one about Solar Pons. He’s also a big fan of the extremely talented James Scott Bell, so I was really happy when Wally agreed to write an essay about that author’s pulp series starring Bill Armbrewster! Take it away, Wally:

Hollywood and hardboiled noir will be forever intertwined. And James Scott Bell, a winner of the International Thriller Writers Award, writing teacher, and creator of at least four entertaining thriller series of books that I can think of (including the delightful Kick-Ass Nun stories), has recently underscored that fact with his ebook Trouble Is My Beat: The Bill Armbrewster, Hollywood Troubleshooter Mystery Novelettes in Classic Pulp Style.

Admittedly, that’s a mouthful of a title, but it’s good marketing. It describes exactly what this gem is. The year is 1945. The war’s just ended, the boys are marching home, and Hollywood is grinding out movies faster than Rita Hayworth is plowing through husbands. Bill Armbrewster is the “troubleshooter” for National-Consolidated Pictures — in other words, he works to keep the studio’s image, and the images of its “people properties,” squeaky clean.

That might entail keeping young actresses out of the clutches of unscrupulous con men or helping an Errol Flynn type keep his nose clean and out of the drunk tank. In one yarn in this collection, Bill even helps Bette Davis fight off a potential blackmail plot.

There are six pulpish novelettes here — “Blonde Bombshell,” “Tough Guy,” “Nabbed,” “The Bat Lady,” “Dancing Feet” and “Blackmail” — and each one smoothly builds from the last, introducing series “regulars” (a very appealing girlfriend, for instance) and fleshing out Armbrewster’s character. And a fun character Bill Armbrewster is, particularly for hardboiled fans like me. 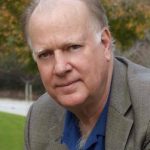 You see, if he isn’t solving problems for his bosses at the studio, he’s busy hammering out crime fiction for the iconic Black Mask magazine, sharing space with the likes of Dashiell Hammett, Erle Stanley Gardner, and Carroll John Daly.

In fact, there are plenty of witty exchanges when, in the course of his day job, Bill bumps into fans of his pulp stories. Great stuff. I was born and raised and lived 25 years in Los Angeles (though not in Armbrewster’s era), so I appreciate that author Bell is a longtime Angeleno. His knowledge of the L.A. landscape rivals that of Raymond Chandler, and he uses his story locations to great effect. These tales feel as if they’re ripped out of the old Los Angeles Times.

This book takes you on a nice ride through Tinseltown and Southern California 1940s history. Oh, and here’s another cool thing. The book includes a handy glossary of pulp slang. It’ll tell you the difference between a fin and a sawbuck, a clip joint and a flophouse, and what it means to order Adam and Eve on a Raft. It seems we pulp fans are lucky to have “Trouble Is My Beat.”

Bell created the William “Wild Bill” Armbrewster character but couldn’t find a market for his stories. “Then came the Kindle revolution,” Bell writes in an Author’s Note. “Suddenly, writers could publish on their own. I started writing my troubleshooter stories for my Patreon community. Now I bring them all to you, in classic Black Mask style. I hope you enjoy them as much as I had writing them.”

I did enjoy them, Mr. Bell. Would it be too much to wish for more Bill Armbrewster stories?

I’m gonna add a part two to Wally’s post, as James Scott Bell is worth talking even more about! There are advantages to being the person who actually has the column…

Bell’s parents were friends with William Todhunter Ballard. That is an unusual middle name. And one he shared with his cousin Rex Stout. Yep – the creator of Nero Wolfe. That was one talented writing bloodline in that family! Ballard – who you know all about already, because I wrote about him here – successfully transitioned from the Pulps to writing Westerns paperbacks and outlasted the genre that he grew up in.

He was an Ohio boy like me, and found his way out West, where he got into the Pulps by seeing The Maltese Falcon at the theater; immediately buying a copy of Black Mask; staying up all night and writing a story about a movie studio troubleshooter named Bill Lennox; and sending it off to Joe ‘Cap’ Shaw – who bought it! And just like that, Ballad was a pulpster.

Bell never met Ballard, but he did know his sister-in-law, who gave him a box of the author’s writings. Lennox made quite an impact on Bell, who, as Wally mentioned above, created his own Hollywood troubleshooter.

In his writing books, Bell often mentions ‘The Kindle revolution,’ which gave writers the ability to self-publish and reach a large audience, almost instantaneously. As Wally mentioned above, electronic publishing (and Paetron) gave Bell an outlet for his ‘Wild Bill’ stories. You can get this collection as an ebook for only $4.99. And it’s even a part of Kindle Unlimited right now. 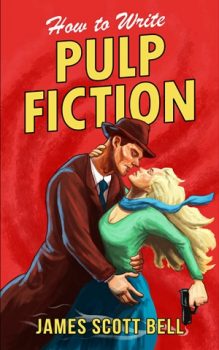 I have a couple of his books on writing, and they are terrific. I really liked Write your Novel from the Middle: A New Approach for Plotters, Pantsers, and Everyone in Between (the man does like long titles, doesn’t he?). One that’s quite relevant to this post, is How to Write Pulp Fiction. It’s a very cool book that gives writing advice, based on the old Pulps style of writing: Type hard. Type fast. Make dough. Since he cites not just the usual hardboiled suspects like Dashiell Hammett, and Erle Stanley Gardner; but others like my favorite writer, John D. MacDonald, I enjoyed it. And I liked the Start-A-Plot Machine, which in itself an homage to Erle Stanley Gardner’s ‘Plot Wheel.’

And then there is also an unexpected treat: The Armbrewster Memoir. Yep – Wild Bill Armbrewster is back! Sort of. In Bell’s fun style, he wrote four pulp-style posts for The Kill Zone blog. First, he gives a short biography of Armbrewster, which is fun. And then, he has the Black Mask star working on a new story in Musso’s (the Musso & Frank Grill; a famous, swanky Hollywood restaurant which is still open).

Drinking and wrestling with his story (this is the common situation), a young, green hayseed comes to him for advice. His name is…Benny Wannabe. The Armbrewster short stories, while homage, are over-the-top in pulp style and vernacular. These little writing snippets firmly have tongue planted in cheek.

After having Benny (usually referred to as ‘the kid’ get him a fresh drink, Armbrewster takes him under his wing and gives him advice on becoming a pulp writer. The four essays are titled, Now you can Call Yourself a Writer; Use Your Noggin to get Lots of Ideas; Write as if it Were Impossible to Fail; and Trouble is Your Business (that’s a clever twist). I’d like to see more of these from Bell. They’re fun – and as with every bit of writing advice he gives – contain helpful information

Bill Armbrewster is fun. And it’s great to see a talented, best-selling, modern-day author, indulging in his love of the Pulps. If you are a pulp fan, I highly recommend picking this up. You’re gonna enjoy it. And I ABSOLUTELY recommend his books on writing. Bell, William Bernhardt, and Lawrence Block are my three favorites for that stuff. And I know I need to check out his fiction. 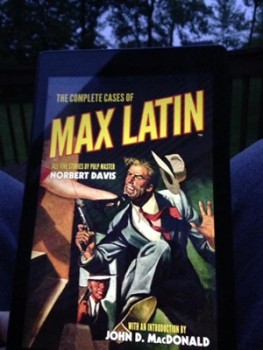 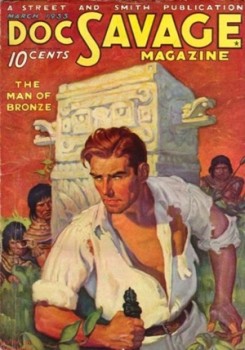 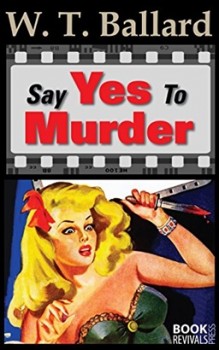 Wally Conger began his love of detective fiction as a child in the 1960s, devouring TV series like “77 Sunset Strip,” “The Untouchables,” and “Burke’s Law.” When the Los Angeles Times dropped Chester Gould’s Dick Tracy comic strip in 1968, he was devastated.

Now retired from a career in corporate journalism and marketing, he spends an inordinate amount of time reading ebook reprints of vintage paperbacks, streaming old Bogart movies, and acting as administrator for Facebook groups about Sherlock Holmes, weird fiction, Edgar Rice Burroughs, and private eyes and film noir. He’s been long married and is a California transplant to Reno, Nevada.

I picked this up a few months ago but haven’t gotten to it yet. Looks like it is moving up in the queue.

Hi Keith! Some of the prose is a little over-the-top and heavy-handed. He’s a little tongue-in-cheek with these. But not very much. It’s definitely more homage. I love the Bill Lennox stories, so I thought that this was pretty cool.

Leave a comment after you read them. And they are definitely quick reads.