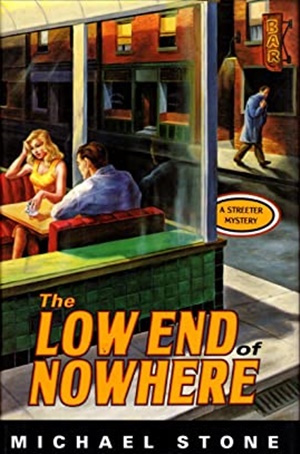 I’m not familiar with too many hardboiled or pulp series’ which feature bail bondsmen or bounty hunters. On reflection, this is a bit surprising, as the roles certainly put the protagonist in the middle of a plot-worthy situation. Below is an updated version of a Black Gate essay I wrote on what I consider to be one of the most under-rated hardboiled series’ in the entire genre. Michael Stone’s Streeter is a bounty hunter in Denver, Colorado. These four books are favorites of mine. I’ll also mention Bail Bond Dodd, who I wrote about before at Black Gate. And finally, a George Raft film set in a bail bondsman’s office.

For my money, the two of the best hardboiled PI series’ of the Post-Pulp Era are Joe Gores’ DKA books (also unconventional, in that they’re about a car repo group), and Stone’s Streeter. Just after I moved out to Colorado Springs in the mid-nineties, a Denver private investigator named Michael Stone released his first book about Streeter, a bounty hunter in the Mile High City. The Low End of Nowhere had a very cool cover by Owen Smith, who would provide three more for A Long Reach, Token of Remorse, and Totally Dead. These covers are fantastic.

Then, nothing: After four very good novels, Stone simply quit writing. It was as if he’d suddenly passed away  (happily, he didn’t). Over the years, I tried to find some news of him on the web but came up empty. He just seemed to lose interest in being a writer in 1999.

That’s a shame, because the Streeter books are excellent. They are very much in the style of the old pulpsters, but with a light touch. Stone clearly appreciated those who had gone before him, like Hammett and Nebel. But his character was no Mike Hammer or Race Williams. There’s finesse in the writing that reminds me of Gores and his DKA novels. 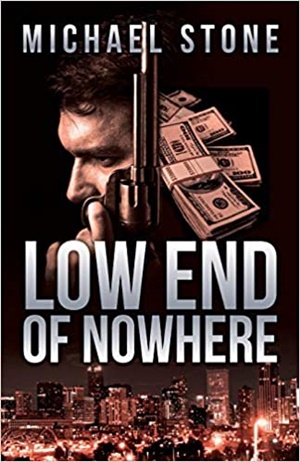 Streeter (we never learn any other name) is physically imposing, having played football at a small division one school for two years before a fight with tragic consequences derailed that life plan. He was working as a bouncer and an accountant (there’s a combo you don’t find too often in these stories) when he ended up getting a job as a bounty hunter.

He lifts weights daily, fighting a slowly losing battle against the aging process. He even buys some hair-restorer but promptly puts it in a bathroom drawer, afraid to use it. Streeter isn’t a superhero: he’s a guy who works hard at working hard.

His Achilles heel is definitely women. He’s been married four times and engaged thrice more and he’s not exactly a beacon of relationship stability. It’s not clear who is more to blame overall: him or the opposite gender. Though, one ex-wife is quite the character in book number two, A Long Reach.

Personality-wise, Streeter reminds me some of John D. MacDonald’s Travis McGee, and that’s a good thing. He’s a worn but noble knight who always tries to do the right thing. He goes all out for his clients and doesn’t whine about his fate during a case (which certainly distinguishes him from Philip Marlowe). The miles are starting to show a bit, but he’s still in his prime. It brings to mind a bit William Campbell Gault’s Brock Callahan – and not for the football tie-in.

He lives in an old church with Frank Dazzler, a retired cop who runs a bail bond service and the guy who pulled Streeter out of the bouncing business. Dazzler gives Streeter work and occasionally helps out, though he’s really more of a sounding board for the bounty hunter.

There are a couple of cops who are regulars. Carey is a buddy who helps him out unofficially. Hanley isn’t quite Inspector Lestrade, but he’s just about as lacking in imagination and desire to look beyond the obvious. But this is really a solo series.

The antagonists are generally divided into two groups: the smarter bosses and the bad guys who aren’t as good as they think they are. Sometimes the two groups are allies; others, they’re in competition. Streeter always has his hands full with villains in this series and this really does help keep the plot moving forward.

Because Stone uses multiple character viewpoints throughout the story, he adds depth to the characters. You won’t find cardboard cutouts here. One bad guy that I like is Mitch Bosco, who is in the process of committing a little arson when we meet him. Stone takes us inside the man’s head in his first appearance:

Diversity of skills ensures your marketability. Mitch had read something to that effect two years earlier when he first embarked on his Ladder of Success. That’s what he’d labeled his self-improvement jag in his Prosperity Journal back then. And he was dead serious about the whole thing.

Back on his fortieth birthday, Mitch Bosco had done some serious soul searching and had decided to turn his life around. He knew he would never be a real citizen with an actual job and benefits, paying withholding taxes and all. That, obviously, was not Mitch. But if he was going to be an outlaw, he determined to be the best outlaw he could be and to make it profitable.

So, he immersed himself in the works of all the self-help gurus: Anthony Robbins, Stephen Covey, M. Scott Peck and the like. Even dabbled in New Age spirituality. He’d read scores of books, attended dozens of workshops, and listened to countless hours of tapes. And he chronicled it all in the Prosperity Journal he carried with him always.

Actually, except for its being the wrong house, Mitch did an outstanding job that morning.”

Tell me you aren’t interested in Mitch Bosco now. He is not your typical hired hand. But he’s not a “look at me” minor character, either. Stone is good at this type of thing. And he mixes in humor throughout.

Denver is a big city with a smaller, western feel. It’s got everything a major metropolis has, but it isn’t like Chicago (Midwest) or Los Angeles (West Coast). And Stone blends Denver into the books, making it an effective background character. His short descriptions of suburbs he doesn’t like and the references to the ‘salvaging’ of LoDo (lower downtown) with the advent of Coors Field bring the city to life.

It’s a shame that Stone gave up on the series after four books. There was definitely a lot of life left in Streeter. In 2014, Brash Books reissued all four of the titles, both as paperbacks, and ebooks. They used new covers, which I think make Streeter look like a hit man. They’re even currently part of kindle unlimited, so you can discover Streeter for free if you are a member.

I like to talk about hardboiled series’ that are undeservedly under the radar, like John Leslie’s Gideon Lowry. Streeter is near the top of that group. The choice of a non-standard city, and profession, coupled with Stone’s real-life experiences, and his writing ability, results in one of the best hardboiled series’ you probably haven’t read.

When Brash reissued the books, there was a possibility – albeit, quite small – that a fifth Streeter book could happen. Brash co-big boss Lee Goldberg would like to see another one. And it would stop me from begging him every year to somehow convince Stone to write another one. Can’t recommend enough. 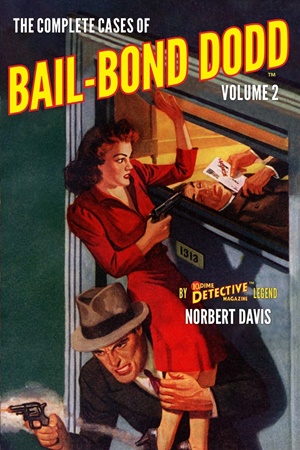 If there’s an unofficial Norbert Davis Appreciation Society, I’m pretty sure I’m on the Board. He’s the third face carved into my Hardboiled Mt Rushmore, and a new introduction I wrote is coming out in a Steeger Books collection of his Black Mask stories.

The Dodd stories have some humor in them, but they’re not ‘screwball hardboiled,’ which is often used as a pejorative term to – wrongly – dismiss Davis. The humor isn’t in the characters; it’s the situations which Dodd and his assistant, Meekins, find themselves in. Dodd doesn’t look for trouble: it finds him.

Dodd is not brave, but he faces up to what he has to do for his job. He doesn’t want to lose the bonds he’s posting. And he has a fatalistic view of his life. Good things happen once in awhile, but they won’t last. And Meekins, his ‘runner,’ is as good at generating headaches as he is at drumming up business. You just get the feeling that Dodd sighs a LOT. He doesn’t have a Streeter – he has to do his own investigative work.

All eight Dodd stories were issued in a two-book collection by Steeger Books. They definitely have Davis’ humor, but they’re more serious than the Doan and Carstairs novels, while less than the two Ben Shaley stories. Definitely recommended for a bail bond series.

But going back to the black and white era, George Raft starred in 1949’s A Dangerous Profession. Humphrey Bogart had tried to obtain the script for his Santana Pictures. Fred MacMurray had optioned it, but no film was made. Co-writer Warren Duff had many hardboiled films to his credit, including Angels with Dirty Faces, Each Dawn I Die, and Chicago Deadline.

It’s a strong cast in a pedestrian story. Since the bonded client (Raines’ husband) is murdered early on, it’s really just a private eye story, not so much a bail bondsman tale. But from Backus doing a voice over on the bail bond business at the opening, to O’Brien’s lectures to Raft on doing his job, the bail bond motif is omnipresent.

Raft was at RKO, the big deal at Warners having been a bust (almost entirely Raft’s fault). His next few films would be overseas productions. I don’t mind this flick, though it pales in comparison to another of his RKO efforts, Nocturne.

I strongly recommend reading Michael Stone’s Streeter. And I always enjoy Norbert Davis’ stories, so you should check out Bail Bond Dodd. A Dangerous Profession is typical fare for the time and worth a watch if you like the actors involved. Midnight Run is just a blast.

Now, if you’ll excuse me, I need to message Lee Goldberg about a new Streeter…. 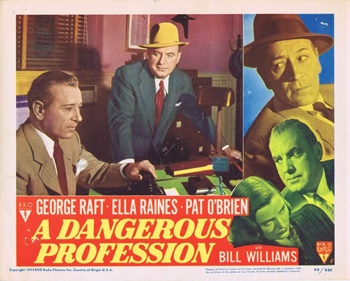 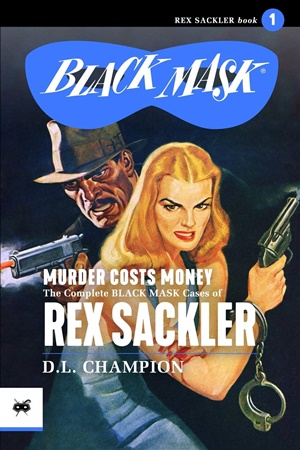 Bounty hunters appear in westerns and sci-fi too. In sci-fi Boba Fett is the most famous. The “space western” Cowboy Bebop had bounty hunters as protagonists.Bebop was as much a crime drama as anything.

Yeah – I think that bounty hunters in Westerns was more common in pulp than in hardboiled. Cad Bane is a cool Star Wars bounty hunter. He just popped up in the Bad Batch. My son was thrilled.