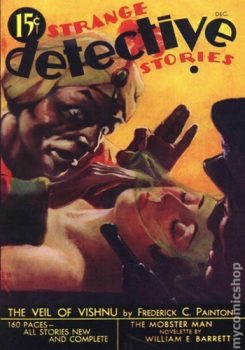 My area of expertise is the hardboiled/Pi genre. But today, we’ll jump over to the ‘shudder pulps.’ In 1933, Popular Publications (Harry Steeger) switched the ailing Dime Mystery over to a new, weird menace format. This started a short fun of success for that pulp sub-genre. Popular jumped in with both feet, shortly after launching Terror Tales, and then Horror Stories. As the tone shifted from weird, eerie, menacing elements to torture, depravity and sadism, a public outcry arose against these shudder pulps and the sub-genre died in the early forties.

Robert E. Howard, always looking for new markets, succeeded in placing “Black Talons” in the December, 1933 issue of Strange Detective Stories. “Fangs of Gold” (a Steve Harrison tale) followed there in February of 1934. Another Harrison story, “The Tomb’s Secret, was in that same February issue, under the pseudonym, Patrick Ervin.

Assuming he was actually getting paid (something that happened with irregularity from Weird Tales), this was a good market for Howard. “Dead Man’s Doom,” the next Harrison story, was slated for the March, 1934 issue. And then, the magazine folded. The story wouldn’t see print until 1978 as “Lord of the Dead” in the Sukll-Face paperback.

Man Stories was a Metropolitan adventure non-crime pulp, from October 1930 through July 1931. Then it changed its name to Popular Fiction from November 1931 to September 1932. Then, Nickel Publications took over and renamed it Nickel Detective, from January 1933 to August of that year. And finally, Strange Detective Stories from November 1933 to February of 1934. Another victim of the Great Depression, it folded during the heyday of the weird menace pulps.

Howard appeared alongside Hugh B. Cave, and William E. Barrett, in the December 1933 issue, not getting a cover mention. He would in February, for “Fangs of Gold.” This was only the second issue under the new name; Erle Stanley Gardner had been in the first.

“Black Talons” is ostensibly a mystery story. Joel Brill is a scientist, trying to find info on a ceremonial dance performed by some West African tribe. On assignment for a museum, his search of the library in the Corinthian Club yields no clues, and he ends up conversing with fellow member Buckley, who is a detective.

Buckley suggests he ask other club members, naming John Galt. Brill discards that option and calls Jim Reynolds. Reynolds’ servant, Yut Wuen, says that Brill had called earlier in the evening, and Reynolds had gone to meet him at the latter’s lake cottage.

Reynolds protests he made no such call, to no avail. Buckley knows Reynolds had not made the call, and the two drive out to the cottage. Where they find that Reynolds lay dead in the bedroom, in a pool of blood. There are signs of a struggle, and a torn screen from an open window. The power had been switched off, outside. 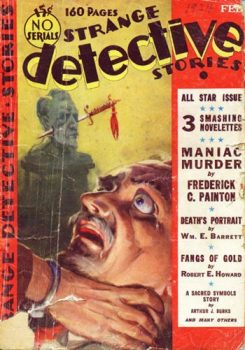 Reynolds’ throat had been torn out, not cut. Buckley, using his deductive logic, determines that the killer turned off the power so he, or it, could kill in the dark. With claws or talons.

Buckley has doubts about Brill, even though he is actually the man’s alibi. Shortly after, Brill is jumped and knocked unconscious at his house. Head covered, he finds himself tied up on Reynolds’ bed, captive to the man’s three servants, who believe that Brill made that phone call, and had something to do with Reynolds’ death.

They are going to put a rat, in a bowl, on his stomach, and let it eat its way through him, to kill him. Then the lights went out, and “…he saw something dark and bulky rear up in that square (the window). Etched against the stars, he saw a misshapen head, vague, monstrous shoulders.”

The intruder wreaks havoc on the three kidnappers, and flees. Jugra Singh, a Sikh, managed to survive and cuts Brill free before he himself dies. Brill turns on the lights and finds the other two men dead. Singh had a bloody knife, indicating he, at least, had injured the attacker.

Taking knife and flashlight, Brill follows a bloody path, finding a human footprint, in blood. So, it wasn’t some giant cat. But he imagines ghouls, or werewolves. This was a staple of the weird menace genre. The story presents as some tale of a supernatural, or non-human, foe. But near the end, a more prosaic solution appears likely; though still not your run of the mill villain from a detective story.

Tracking into the dark, scary forest, he finds a misshapen, powerful, African native, with long, sharp, keen, curving steel hooks, on each finger. These were the claws in the story.

John Galt suddenly appears out of the darkness and shines the light on the dying man, with a “What’s going on here?” approach. The native suddenly spoke to Galt in some strange tongue and feebly tried to give the talons to him. Brill understands what was said, and that Galt was the native’s master. So, Galt pulls a gun on Brill.

The story lamely turns into a complete exposition dump, starting with Galt saying, “Good! I’ll give you the low down…” It is beyond ham-handed. Turns out Reynolds had stolen gold from the Ekoi tribe. Guja, the native, had been exiled for some reason, and wanted to hunt down Reynolds to get back in good with his people. Galt agreed to help Guja find Reynolds, in exchange for a cut of the gold.

Galt made the fake call, and Guja killed Reynolds. Then, being dumber than dirt, when he saw the light flash on in the cabin, attacked again and killed the servants.

It’s a total confession, and Galt asks Brill if he’ll keep quiet for some of the gold. Seriously???? Brill yells, “No,” and misses a knife throw, while Galt, shooting like a storm trooper, misses with his gun. Buckley had conveniently come, silently, during the confession, and exchanges shots with Galt, incapacitating him.

He had suspected Brill, still, and was looking for him, when he came upon Galt, to save the day.

It’s nominally a detective story, though the scientist, not the detective, is the protagonist. The black talons serve to make it look like a supernatural or non-human story. But the huge info dump knocks the whole thing flat for me. Brill rejects the offer, and somebody else comes in and saves him. It’s a weak ending to the story.

Howard’s prose in his better works is terrific. He’s one of the best ‘writers’ I’ve found. But there’s nothing outstanding here – it’s rather pedestrian.

Howard would write more weird menace, finding a home for a few. Several would not be published until – in some cases ‘long’ – after his death. This included some featuring his harboiled detective, Steve Harrison. The weird menace sub-genre did not play a major part in Howard’s writing library, compared to Westerns, boxing stories, Conan, and other horror.

Horror and weird menance aren’t my thing, so admittedly, I’m not the target audience going in. But this story doesn’t do much for me. In June of 1934, “The Haunter of the Ring” appeared in Weird Tales, and I think that’s a much stronger weird menace story. 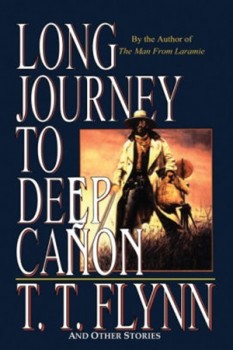 I agree with you on this one, Bob. Howard never quite got the hang of writing detective stories as he said in his letters. He had Otis Kline trying to school him on how to write this one, Howard’s first attempt at writing a detective story, and it shows. Now, if he had only thrown in some meddling kids and a dog…

Ha! I talked about his dislike of detective stories in my Steve Harrison essay. Though, I’m a little more of a fan than I used to be. I’ll be tackling one of those soon. Plus, one of his ‘Spicy’ stories.

As Scott says, great meeting you at Howard Days. I wish Howard had gotten more comfortable with the genre and written more. He could have gone on to become a Black Mask writer.

I wrote an article on the Steve Harrison stories that wasn’t too kind to them. But over the past few years, I think if he’d continued working on them, and stayed in that sort of Fu Manchu vein, they might have fit into a nice niche. And maybe even lend themselves to a novel or two.

And it was great hanging out with you at The Pavilion at Howard Days. Really enjoyed it!

Hi Bob. I was very glad to meet you at Howard Days this year! Detective stories certainly weren’t Howard’s forte. Some of the Steve Harrison stories are pretty good action tales, though. Will you be writing an article about your time at Howard Days? I would enjoy reading it.

Hi Scott. Yeah – it was neat talking with you. I like that you can hang out and chat with anyone at the Pavilion. That was probably my favorite part of Howard Days or me. And I’m not really much of a mixer.

Howard said he didn’t like writing mysteries, and I think that comes through. Too bad he didn’t stick with them longer.

I should have written a Howard Days post for this past week, but just wasn’t feeling it. Might try this weekend. Another week or two, and I’ll have forgotten half of it. This aging thing!!!

Hopefully I’ll make it to another one. I wish I had been an REH fan the couple of years I lived in Austin, but I hadn’t discovered him yet. Typical of my life…

Thanks for coming up to me there. I enjoyed talking with you. Maybe I’ll write that essay on Howard and the story of Saul some day!

Bob, I hope you do write your impressions of Howard Days, and I will be on the lookout for any future article concerning Saul. On an unrelated note, here’s a reference from the Conan tale “The Phoenix on the Sword,” chapter 4, which you may find interesting: “He came upon a wide stair carved in the solid rock, and the sides of the shaft were adorned with esoteric symbols so ancient and horrific that King Conan’s skin crawled. The steps were carven each with the abhorrent figure of the Old Serpent, Set, so that at each step he planted his heel on the head of the Snake, as it was intended from old times. But he was none the less at ease for all that.”

I like ‘Phoenix.’ It’s probably in my top half of Conan stories. I don’t mind ‘By This Axe I Rule,’ though I’m not much of a Kull fan. ‘Phoenix’ is a good, relatively short story.

Bob, did you see the Genesis 3:15 reference in that quote?