Hello, Black Gate folks! Normally I spend my time here raving about other people’s books, but this time I’m in the very weird position of talking about my own. Yikes. Catalyst is my debut fantasy novel, releasing in October from Atthis Arts, and John has graciously invited me to talk a bit about the world of the book.

Catalyst centers on three estranged friends: Mavrin, a street magician who doesn’t believe in real magic, other than what the Aspects provide; Eyasu, labeled a heretic by the Aspects’ followers but determined to prove a secret history everyone else rejects; and Deyeri, a retired soldier whose adopted city is threatened by forces tied to that history. They begin the story in different corners of Aelda, a world that split apart at its core a little over three centuries earlier, and would have been destroyed completely if not for the intervention of the Aspects: massive, cephalopod-like beings the people of Aelda believe to be their gods, who have been circling the planet ever since providing atmosphere and holding what remains of Aelda together.

When you talk about a world that’s somewhat post-apocalypse, the impulse is to begin by immortalizing what was lost. Aelda certainly was a vibrant, dynamic world before the Fracture, but I wanted it to feel that way three hundred years later, too. Maybe more so, as people have figured out ways to thrive and innovate as opposed to simply surviving.

In designing the key elements of Aelda, I tried to keep that dynamism in mind. As soon as I had decided Aelda would be this shattered world, and placed the Aspects around it, I had to think about the other major effects caused by both of those things. There’s an atmosphere, but what is it really like? What’s the hydrologic cycle like? I didn’t want the world to feel utopian – here’s a bubble that’s perfectly intact and everything’s great, thanks be to the Aspects. That brainstorming eventually led to the Winds: a perpetual gust across the entire planet, caused by the Aspects passing overhead. Warmer to the south, where they pick up extra heat from Aelda’s exposed core, and then naturally colder in the north as that heat dissipates. Pressure or intensity changing depending on whether an Aspect has just passed by, or if they dip lower in the atmosphere.

The constant presence of the Winds would logically affect daily life in a hundred ways. Protective clothing would make sense, but that felt stereotypical to me; Aelda isn’t Arrakis or Crematoria. But having goggles on hand during a Longwind makes sense. Weighted tassels or heavy cords binding cloaks or dense beads in long hair let people express themselves without the Winds constantly whipping things about. Buildings extend underground instead of upward, since constructing something tall would be difficult – except in Farglade, where we spend half our time in Catalyst, and Mavrin remarks on the strangeness of their design elements in a few ways. The Winds also helped me lean into the sustainability elements of Aelda: windtowers everywhere for power, condensers drawing moisture from the air, geothermal vents closer to the exposed core, and so on.

Considering transportation brought me to windships. Large bodies of water are gone, either burned away during the Fracture or dried up over time. That leaves behind massive, empty rivers where the Winds would be more intense – so why not use them to get around? The resulting Windroutes are a key part of post-Fracture Aelda, which meant that they became crucial for where settlements are located and the geography in general. So when it came time to devise an actual map of Aelda, the Windroutes had to be the centerpiece, and required me to think more carefully about Aelda’s geography. 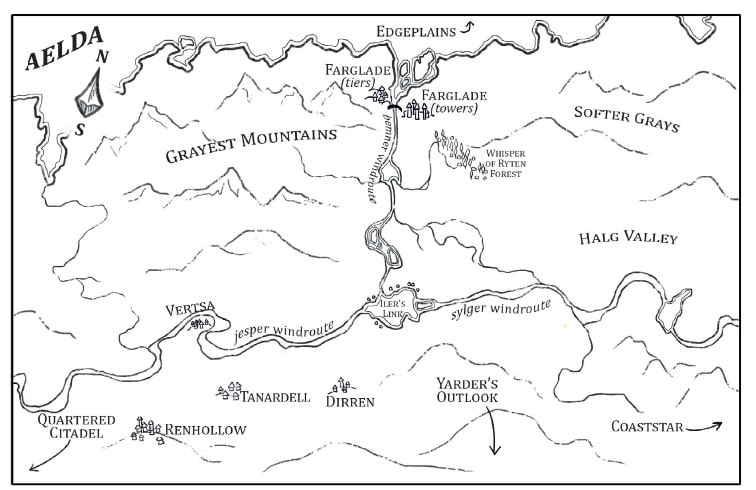 Full disclosure: I’m not a map person, and I don’t think every fantasy book needs a map. But after Catalyst sold, smarter people convinced me we needed one here. This is where gigantic props and thanks go to my friend Sienna Tristen, who not only agreed to draw the map but sat down with me to discuss Aelda in detail so that everything they drew would make sense. (Sienna is also a fabulous writer – the second book in their Heretic’s Guide to Homecoming duology comes out in October, and I highly recommend both.)

I had to admit to Sienna on our Zoom call that everything outside of the locations seen in the book was vague in my mind. I knew where things were located in relation to each other, and in relation to the major Windroutes, but not much beyond that. Which sort of makes for a boring map, so we started discussing what could be out there and why – where a range of mountains might have been, where the ocean ended before the Fracture, and so on.

Sienna is a masterful worldbuilder, so a few things came up that I hadn’t considered, and thankfully I hadn’t finished the final round of copy edits on Catalyst so I could make some adjustments in the manuscript. There were also technical things to work out, like how to make it clear that the Windroute isn’t filled with water, and whether that mattered. How would people on Aelda draw the map, since they all know the rivers are dry?

Back and forth we talked, while I marveled at Sienna creating an image of Aelda through stylus strokes. The resulting map is a) phenomenal as a visual piece, courtesy of Sienna’s skills; and b) magical in its own right as a way to understand Aelda both before and after the Fracture. Each settlement’s location depends on whether it was founded entirely post-Fracture or rebuilt on ruins from the world before. Iler’s Link exists entirely because of talking with Sienna. The erosion caused by the Winds is reflected in the existing mountain ranges, and so on. I’m not saying I’m a converted map devotee or anything (we’ll see how my body of work looks in twenty years) but in this case, the map was a key part of the development process for Catalyst and adds a lot to this story.

I could go on and on about this world. Critters like garnill birds or takka. How the underground markets of Vertsa came to be. Farglade’s twin districts. The followers of the different Aspects. How the trees are all bent because of the Winds, and grass isn’t a thing. But then you’d know everything about the book, and where would the fun be in that? But I hope this gives you a sense of the world you’ll experience if you pick up Catalyst – and if you do, I hope Aelda is as wondrous for you as it has been for me.

Catalyst is available for pre-order now through Atthis Arts and elsewhere, including Amazon, Kobo, B&N and iBooks, and releases October 11th. If you pre-order the paperback direct from Atthis, you’ll get the eBook IMMEDIATELY. And if you like what you read, reviews are super helpful for both small press and debut novelists.

An Ottawa teacher by day, Brandon Crilly has been previously published by Daily Science Fiction, Apex Magazine, Fusion Fragment, PULP Literature, Flame Tree Publishing and other markets. In 2021, he co-founded Bag of Giving, a monthly Twitch series where authors play TTRPGs for charity. He’s also an Aurora Award-winning podcaster, conference organizer for Can*Con, and regularly has too many D&D campaign ideas than he could ever fit into his schedule. Learn more on his website.