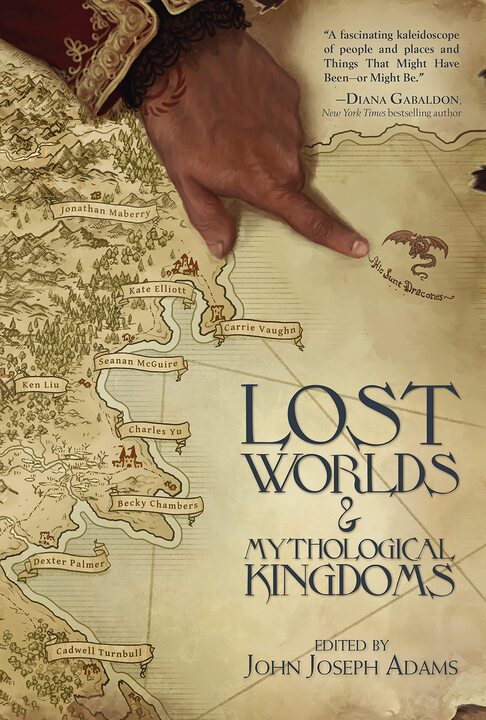 I owe my professional writing career to John Joseph Adams.

I published four stories in Black Gate magazine, all under the name Todd McAulty. I wrote one novel, The Robots of Gotham, and before I could really start to shop it around John purchased and published it under his John Joseph Adams imprint at Houghton Mifflin Harcourt. That was the first time I’d ever been paid for my fiction, and with that one sale, John made me a professional writer. He subsequently bought several of my short stories for Lightspeed magazine, including one I really wanted to call “Sixty Ton Killer Robot,” but John wisely retitled “The Ambient Intelligence.”

It’s no surprise that John and I are pretty aligned. We both love fast paced adventure SF and fantasy in colorful settings. Also robots! (Yeah I know. Everybody loves robots.) John is a prolific anthologist, with nearly 50 anthologies under his belt in the last 15 years or so, including the popular Wastelands and The Apocalypse Triptych volumes, and I’m always on the lookout for his latest. So I was excited to see Lost Worlds & Mythological Kingdoms, a fat volume of original stories from the top fantasists working today, including Kate Elliott, Carrie Vaughn, Tobias S. Buckell, James L. Cambias, Jonathan Maberry, Seanan McGuire, Jeffrey Ford, Becky Chambers, Theodora Goss, and many others.

Lost Worlds & Mythological Kingdoms is a collection of tales of lands “beyond the edges of the map.” Marlene Harris at Reading Reality gave it a 4-star review, saying in part:

The stories I plan to put on my Hugo Ballot next year, because they were utterly awesome… “The Cleft of Bones” by Kate Elliott, a story about slavery, revolution and rebirth as seen through the eyes of an absolutely fascinating character. “The Voyage of Brenya” by Carrie Vaughn, which is a story about gods and heroes and the way that stories turn into myths and legends. “Out of the Dark” by James L. Cambias, one of two space opera stories, this time about a corporate hegemonies, a salvage crew consisting of lifelong rivals, and a pre/post spacefaring civilization in which Doctor Who’s Leela would have been right at home.

Three stories were utter gems from start to finish. “Pellargonia: A Letter to the Journal of Imaginary Anthropology” by Theodora Goss, which consists entirely of a letter written to the afore-mentioned journal by three high school students who took the founding principles of the journal – that imaginary anthropology could create real countries – and ran with it all the way into Wikipedia, the nightly news, and a civil war that has captured one of their fathers somewhere that never should have existed in the first place.

“The Orpheus Gate” by Jonathan Maberry reaches back to the Golden Age of lost kingdom stories by taking the utterly science driven great granddaughter of Professor George Edward Challenger (hero of Sir Arthur Conan Doyle’s The Lost World) and putting her on a collision course with a friend of her great grandmother’s – a woman who challenges the scientist’s belief in everything rational and provable in order to force the young woman to finally open her mind to a truth she does not even want to imagine, let alone believe.

And finally, “The Tomb Ship” by Becky Chambers, which is a story about a loophole, about the evil that humans do in the name of a so-called ‘Greater Good’, and just how easy it is to fall into the trap and how hard it is to even think of a better way. Or even just a way that lets the protagonist sleep at night with a somewhat clear conscience. That it also feels like a tiny bit of an Easter Egg for The Outer Wilds was just the right icing on this gold-plated cake of a story.

I enjoyed poring over that striking cover, with its evocative fantasy map crammed with nifty little details (including the name Ken Liu, who doesn’t actually appear inside.)

Here’s a list of all those who do appear in the Table of Contents.

Introduction, John Joseph Adams
“The Light Long Lost at Sea,” An Owomoyela
“The Cleft of Bones,” Kate Elliott
“The Voyage of Brenya,” Carrie Vaughn
“Comfort Lodge, Enigma Valley,” Charles Yu
“The Expedition Stops for the Evening at the Foot of the Mountain Pass,” Genevieve Valentine
“Down in the Dim Kingdoms,” Tobias S. Buckell
“Those Who Have Gone,” C.C. Finlay
“An Account, by Dr. Inge Kuhn, of the Summer Expedition and its Discoveries,” E. Lily Yu
“Out of the Dark,” James L. Cambias
“Endosymbiosis,” Darcie Little Badger
“The Orpheus Gate,” Jonathan Maberry
“Hotel Motel Holiday Inn,” Dexter Palmer
“On the Cold Hill Side,” Seanan Mcguire
“The Return of Grace Malfrey,” Jeffrey Ford
“The Tomb Ship,” Becky Chambers
“Pellargonia: A Letter to the Journal of Imaginary Anthropology,” Theodora Goss
“There, She Didn’t Need Air to Fill Her Lungs,” Cadwell Turnbull

See all our recent coverage of the best new fantasy and SF releases here.

Definitely a book I need to get!

will always pick up anything JJA edits or puts out, hasnt done me wrong yet

I really want to read his COSMIC POWERS anthology, which sounds like a ton of fun.

i enjoyed that one a lot, made me really seek out Charlie Jane Anders, i know Tobias Buckell from halo books, and finding Kameron Hurley from this was also a great surprise, i reallu think Kameron and Charlie have a lot of talent. and my go to guy for cosmic stuff in comics Dan Abnett, highly recommend you check it out!

I’m with the you guys, I love me some JJA collections but the real deal here is, you wrote Robots of Gotham? Man, I love that book! One of the best books I’ve read in years. Please tell me you’re working on a sequel or at least another novel! Now I’ve got to go back and read it again, sweet!

Thanks for the kind words! Yeah, I wrote THE ROBOTS OF GOTHAM. The first section was originally going to appear in BLACK GATE 16 (and we even had a teaser for it in BG 15), but the magazine folded with issue 15. Just as well, the novel allowed to me expand the story considerably.

Yes, I’ve written about 200 pages of the sequel, although for the past two years I have been doing work-for-hire stuff for LA production studios that has taken up all my time (but which pays extremely well, so I’m not complaining.)

I sent JJA the first chapter of Book two (tentatively titled THE GHOSTS OF NAVY PIER), and he published it as a standalone story in Lightspeed. It features Barry and Zircon Border on the trail of a 60-ton killer robot hiding out in a shipwreck on the shore of Lake Michigan. It was a blast to write, though a challenge to trim it down enough to fit the constraints of the magazine.

Love to hear what you think of it!

Thanks for the update John. Just bought that issue and can’t wait to dig in! I’ve let my sub to Lightspeed lapse and that’s my bad, so I re upped my sub as well. Glad to hear you’re working on a sequel, and that you’ve got good work in the meantime. Cheers bud!

Great theme. This sounds great. Enjoyed the history too and instantly thought how much Todd McAulty has paid it forward….Black Gate in all its forms has helped jump start many authors’ journeys. Three cheers for Todd!

Thanks Seth. In those brief years I was an editor for a fantasy magazine, I grew to love discovering and nurturing new talent. BLACK GATE the magazine died in 2012, but the habit of showcasing new talent whenever I found it never really left me.