This morning’s post would have been about Houdini and Doyle, the new TV series airing Monday nights on Fox. Except I missed the pilot: and contrary to much public opinion, I only write posts on subjects I know something about. Maybe not much, but… From what I can tell, it’s a buddy cop show in which the pair, one a believer in supernatural phenomena (Doyle), the other a skeptic (Houdini), investigates crimes. Brings to mind a poor man’s Mulder and Scully, but I’ll give it a chance.

And I’m about the last Black Gater you’re going to see a post from regarding the mess that is the Hugo Awards, so that’s not happening here. New fictional TV show aside, Sir Arthur Conan Doyle was quite interested, and occasionally involved with, real-life crimes.

I wrote about the George Edalji case here (and even put the world’s first private consulting detective into the crime in Volume III of The MX Book of New Sherlock Holmes Stories). I talked about his involvement with The Crimes Club in this post. And when time permits, I’m going to refresh my knowledge regarding the Oscar Slater case and write about that.

But my interest in Holmes and other Victorian mystery fiction, as well as hard-boiled mysteries, has resulted in reading about true crimes from those eras. Of course, there’s Jack the Ripper, various ‘trunks on trains’ murders, a plethora of poisonings (Florence Bravo is a particular interest area of mine) and more to delve into.

I lived in Austin, TX for a few years in the early 2000’s. While there, I read Steven Saylor’s A Twist at the End, and was fortunate enough to attend a lecture he gave on the killings. What killings, you say? Read on. 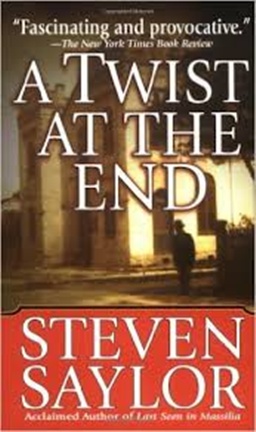 When I was in Austin, I read this piece by Skip Hollandsworth in Texas Monthly (a fine magazine) about a serial killer running amuck in Austin in 1895. ‘The Servant Girl Annihilator,’ who struck before Jack the Ripper and had a higher body count, was never caught. One school of thought even posits that it was Saucy Jack himself who committed the killings (mayhaps sort of a “warm-up”).

Saylor took Austin resident O. Henry (real name William Sydney Porter) and wrote a fictionalized account of the murders, with the not-yet-esteemed author as the protagonist. I love how Saylor paints a picture of 1880s Austin and enjoyed the book (you will too). There have been a few others books in recent years, though I haven’t read any of them and last month, Hollandsworth published his true-crime book about the murders, which I’ll be reading soon.

In December of 1884, Mollie Smith was attacked in her bed with an axe and dragged into the backyard and killed. Her boyfriend had been attacked and knocked unconscious. Eliza Shelly was also attacked with an axe in her bed: her children witnessing the horrible event. Irene Cross was killed with a knife in her bed: these latter two events occurred on separate nights in May of 1885. All three were young, black women who worked as domestic servants.

Mary Ramey was an eleven-year old black girl. Her mother, also a servant, was knocked unconscious in their home one August night. The intruder took Mary out to the yard and raped and murdered her. It was a truly horrific crime.

In September, Orange Washington, a black man, was murdered in his bed with an axe. Gracie Vance, who lived with him, ostensibly as his wife, was taken out back and killed.

Susan Hancock, the first white victim, was struck senseless and carried into her backyard. Her husband woke up and scared away the intruder, but she died a few days later from the blow.

Eula Phillips, the other white victim, was killed the same night (Christmas Eve) as Hancock. Her husband was in their bed, an axe wound to the head. Their son was also there, unharmed. A blood trail led from the bed to an alley outside, where Phillips’ nude body was found.

Extra police were hired, strangers were queried and given 24 hours to leave town if answers weren’t satisfactory, rewards were offered, a former Texas Ranger became Marshal (sheriff) and private detectives were brought in. Whether any of this had an effect or not is unknown: But what is certain is that the murders stopped after Phillips’ death.

Eula Phillips’ husband Jimmy was tried and convicted of her murder (she was cuckolding him), but that verdict was subsequently overturned. Susan Hancock’s husband was tried for her murder but there was a hung jury and the case was discharged without a verdict. You’ll note only the white victims had charges filed on their behalf. And it’s a fact that hundreds of black males were rounded up and jailed as suspects. Racial issues certainly had an impact.

And since two husbands were charged, that would indicate the authorities did not suspect one killer for these savage murders.

There were other attacks that did not result in deaths that some have linked to the same killer. One historical footnote is related to the attacks having occurred on moonlit nights. Austin’s famous ‘moonlight towers’ are said to have been put up in response to the killings, though since they were erected a decade later, that strikes me as a tenuous assertion.

It was never determined if the killings were all done by one person, or more than one. It’s quite conceivable that Austin was home to the first American serial killer.

This is certainly not an in depth essay on the Austin murders. If you are interested in learning more about these killings, start by clicking on the link above to Skip Hollandsworth’s essay, “Capital Murders.” I’ll certainly be reading his book, The Midnight Assassin, in the very near future. You can also click here to read about Nathan Elgin, whom J.R. Galloway, author of The Servant Girl Murders: Austin, Texas, 1885, believes was the killer.

A 2014 episode of PBS’ History Detectives aired about the case and can be viewed online.

Bob, have you tried the Steven King crime noir novels? I just wondered what you thought of them. Also the Avengers and Doc Savage stuff. Don’t be mad but I have just discovered them. Life has been good.

Ape – I haven’t read any in awhile, but I love the Doc Savage books. I think they’re a real treat. Definite influence on the Dirk Pitt and Kurt Austin books from Clive Cussler. And of course, the Gabriel Hunt series, which was an homage to Savage.

If you mean the British tv show, I like the Avengers, but haven’t read them.

Which King books? I’ve read a bit of his horror and didn’t care much for it. And I’ve got The Colorado Kid on the shelves (basis for the SciFi Network tv series, Haven).

[…] I also did a post on a serial killer loose in Austin, TX back in 1885. That’s three years before Jack the Ripper, yet it’s a largely forgotten horror in American crime history. Go ahead and give it a quick look. […]