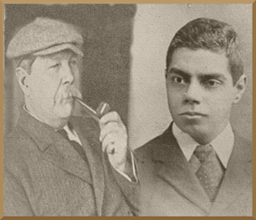 In the Old Testament, Nehemiah is the cupbearer to the king of Persia. His people, the Israelites, had been conquered by the Babylonians and sent into captivity years before. Groups of exiles had been allowed to return to Jerusalem, but the walls, which signified security and nation in those days, hadn’t been rebuilt.

When Nehemiah learned of the plight of his brethren, he wept, mourned, fasted and prayed. Such was the depth of his feeling for them.

In December of 1906, Sir Arthur Conan Doyle came across the case of George Edalji. Though he had no ties whatsoever to the disbarred solicitor from the village of Great Wyerly, Doyle was so outraged at the obvious injustice he perceived, that for over half of a year, he dedicated himself to exonerating the recently freed man.

There had been a series of cattle, horse  and sheep maimings in the Wyerly area in 1903. Based on specious circumstantial evidence, the twenty-seven year old Edalji (son of the local reverend), poor of vision and with a spotless record, was convicted and sentenced to seven years in prison. Edalji’s father was from Bombay and there is no doubt that prejudice played a huge part in the story. The Dreyfus Affair comes to mind. Edalji was released after three years with no pardon, no explanation and no recompense. 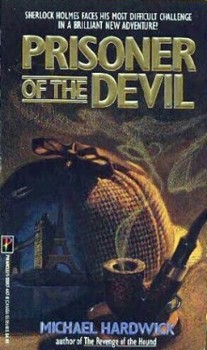 It is Elementary – French Captain Alfred Dreyfus was convicted of treason in 1904 and sentenced to the notorious Devil’s Island. Dreyfus was eventually completely exonerated and his case is acknowledged to be a clear issue of anti-Semitism. Michael Hardwick had Sherlock Holmes on the case in Prisoner of the Devil, which remains one of the finest pastiches yet written.

Back in 1888 (Edalji was twelve years old), Pastor Edalji was harassed with anonymous letters and vandalism. A maid was found guilty, though she protested her innocence.

In 1892, a more severe harassment campaign was conducted, lasting for three years. Controversial letters were written in Reverend Edalji’s name, notes were shoved under doors and through open windows at the vicarage, debris was scattered on the lawn, etc. And the police somehow fastened on young George as the culprit!

Here’s an example: George Anson was the Chief Constable. When a key was taken from the nearby Wallser school (which Edalji did not attend) and found upon the vicarage’s doorstep, Anson wrote, “I may say at once that I shall not pretend to believe any protestations of ignorance which your son may make about the key.”

The campaign ended in 1895 with no miscreant identified and all remained quiet until the 1903 maimings. On the morning of August 18, a pony was found, bleeding from a wound in its belly. There had already been over half a dozen attacks as well as a serious of anonymous letters about the events; some implicating Edalji and others.

The police built a case that Edalji attacked the pony during his walk back home from a boot maker’s shop on the evening of the 17th. When that assertion fell apart on multiple fronts, they said instead that he snuck out of the bedroom he shared with his father (his mother slept with a sickly daughter), attacked the pony and snuck back in. All with nearly two dozen constables patrolling the area.

Questionable evidence was accepted as fact, including the testimony of a handwriting expert who had played a significant role in helping to wrongly convict the innocent Adolf Beck (a famous case at the time). A reading of the affair leaves one with little to no doubt that the police chief had it in for Edalji and fixed on him for guilt. 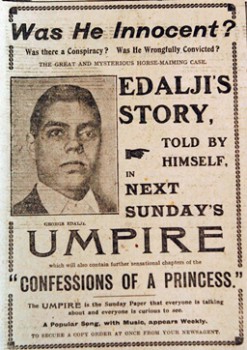 Even though an attack occurred after Edalji’s arrest, it was explained away: his confederates were trying to provide a cover for him. So, he was convicted and spent three years in prison before being released.

On January 11 and 12, 1907, The London Telegraph carried a two-part, 16,000-something word essay from Conan Doyle, demanding justice for Edalji; a complete reorganization of the Staffordshire Constabulary; an inquiry into the court proceedings; and a determination of who at the Home Office was responsible and deserved punishment.

Keep in mind: back in those days, there was no internet or television and not everyone had radio. Newspapers were almost the exclusive medium for information sharing. Those two letters in the paper caused a nationwide uproar and debate.

There was no criminal court of appeals at the time. The Home Secretary appointed a commission of three to re-examine the case. It determined that Edalji had been wrongly convicted. However, almost certainly to save face, it said that Edalji had written the anonymous letters!

Though the man spent three years in prison for a crime he didn’t commit, the Committee stated, “Assuming him to be an innocent, man, he has to some extent brought his troubles on himself,” by writing letters accusing himself. He was given a pardon but denied any compensation for the three years he spent in jail.

The Law Society acted more decisively, restoring him to the Solicitors Roll and allowing him to resume his profession. Doyle protested vociferously to the Home Office but was stonewalled. So, he launched his own investigation into who wrote the letters.

He came up with a more viable candidate. Two in fact: a former Walsall school student, Royden Sharp, with some help from his other brother John (Doyle used pseudonyms in his accusations). The authorities had popped their heads up, made their pronouncements and promptly reburied them in the sand. The Edalji affair was done for all practical purposes. 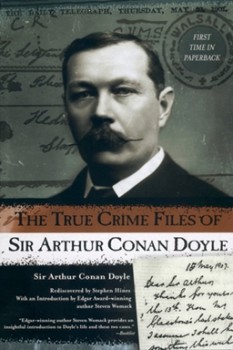 The young man was never officially exonerated of sending the disturbing letters, nor did he ever receive any remuneration for being wrongly imprisoned for three years. I doubt he found much satisfaction that his case (along with Adolf Beck’s) was the primary motivator behind 1907’s Criminal Appeal Act. Previously, only points of law in criminal cases could be reviewed. Now, points of fact could be reviewed. Edalji would surely have preferred to be a beneficiary of the new law, rather than a driving force behind it.

Near the end of his letters in the Telegraph, Doyle said, “The man is guilty, or he is not. If he is he deserves every day of his seven years. If he is not, then we must have apology, pardon and restitution. There can obviously be no middle ground between these extremes.”

Sadly, the British authorities chose the middle ground. Edalji did practice for several decades and passed away in 1953. There’s a misconception that Doyle’s fight for justice led to Edalji’s release from prison. This is not true, as pressure brought to bear (primarily by R.D. Yelverton, former Chief Justice of the Bahamas) had pushed the government to set Edalji free.

But Doyle did make the Edalji a cause celebre after his release. Sir Arthur was relentless in his efforts to force the government to right a wrong. It was a tempered success, as he was jousting at windmills. The Home Office simply refused to go “all in” to fix what had gone wrong.

In 1974, an episode of The Edwardians was based on the Edalji case.

In 2005, Julian Barnes fictionalized this affair in his best-selling novel, Arthur and George. It was adapted into a play in 2010. Next month, a three-part television movie will air on ITV, based on the book.

If you’re interested in the Edalji case, I recommend The True Crime Files of Sir Arthur Conan Doyle, which contains the full text of The Case of Mr. George Edalji, with much additional contemporary material (it also has Doyle’s treatise on the Slater case). Barnes’ Arthur and George takes liberties and shouldn’t be your only source.

It’s Elementary – George Edalji is often mentioned alongside Oscar Slater. Slater, a rather unlikable immigrant, was wrongly convicted of murder. Once again, Doyle led a public crusade to exonerate an innocent man. It is due to Doyle that Slater was released from prison, pardoned and recompensed.

Way back in June, I posted about Doyle’s membership in the Crimes Club. The author of Sherlock Holmes was quite interested in the field of crime.

Dick Francis’ Come to Grief also hinged on pony and horse mutilations. I often wondered whether he was using the Edalji case, or had it in mind while writing.

I’ve heard good things about Dick Francis’ horse racing mysteries for a long time, but I’ve never read any. I probably should add him to the list.

[…] The Case of George Edalji – Conan Doyle played a huge role in exposing this unjust conviction. […]

The Public Life of Sherlock Holmes – Catching Up | Almost Holmes

[…] Edjali and Sir Arthur Conan Doyle’s noble fight to set the matter straight. On February 16, I gave Black Gate readers a preview of the affair. Based on actual facts, not Barnes’ historical […]

‘Arthur & George,’ the miniseries I mentioned, airs in America on PBS, starting on September 6.

[…] the Parson’s Son” is mine. You, wise reader, know about the sad case of George Edalji because you read about it here. Doyle’s involvement came after Edalji had been released from prison. I moved back to the time of […]

THE Holmes Anthology is Out! | Almost Holmes

[…] of a sentence. My story is easier to read than that). For a more factual look at the affair, check out my post over at, where else, Black […]