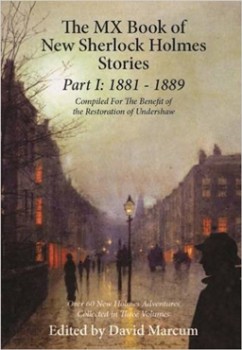 On October 1, The MX Book of New Sherlock Holmes Stories will be released, with a major party in London taking place to commemorate the event. It is a MASSIVE, three-volume collection containing 2 Introductions, 3 Forewords, 2 Poems, 2 Essays and 63 brand new Sherlock Holmes stories. In fact, it’s the biggest collection of new Holmes stories ever!

This collection was put together by editor David Marcum, who is my main Solar Pons buddy. He emailed me one January afternoon, telling me he had had a dream the night before. He wanted to put “together an original traditional-Canon Holmes anthology for MX.” David writes Holmes books for MX Publishing in England and he had emailed MX head Steve Emecz already that morning.

David is a Holmes purist and as he wrote to me, “there would be no weird Alternate Universe or present-day stuff, no Holmes-is-the-Ripper, nothing where Watson is at Holmes’ funeral or vice versa.” He wanted traditional stories as Sir Arthur Conan Doyle would write them, narrated by Watson.

The part that I chuckle at now is that he said he planned on asking a small and select group of authors to participate. But there was no chance of that. More and more folks signed on and it grew from a single book to two to a trilogy. 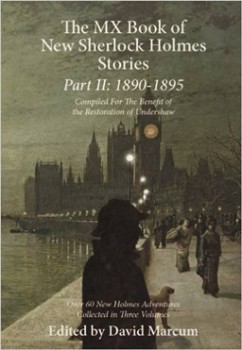 There was a successful Kickstarter, raising over $23,000 and the authors have all donated their royalties to the preservation of Doyle’s former home at Undershaw, which is where he wrote The Hound of the Baskervilles.

I received my author copies a few days ago and have only had the chance to read a few stories so far. But it’s an impressive list of contributors. Book One includes Hugh Ashton (“The Case of the Lichfield Murder”), who is my favorite current Holmes pastiche author. I’ve only read a couple of tales by Denis O. Smith (“The Adventure of the Inn on the Marsh”) but a few friends whose opinions I trust rate him as one of their favorites. Will Thomas (“The Adventure of Urquhart Manor”) is the author of the popular ‘Barker and Lewellyn’ series (a future Public Life of Sherlock Holmes post subject), which is a must read for Holmes fans.

Over in Book Two, my fellow Ohioan William Patrick Maynard (“The Case of the Unrepentant Husband”) is the official continuator of Sax Rohmer’s Fu Manchu novels. J.R. Campbell (“Lord Garnett’s Skulls”) has co-edited several Holmes anthologies. Bill Crider (“The Case of the Anarchist’s Bomb”) is the award-winning writer of the ‘Sheriff Dan Rhodes’ series and wrote his PhD dissertation on the hard-boiled novel.

It’s Elementary – The collection was submitted for inclusion in The Guinness Book of World Records for largest ever collection of new Holmes stories. No word back yet…

Lyndsay Faye (“The Adventure of the Willow Basket”) wrote the best selling Holmes vs. the Ripper novel, Dust and Shadow. Bert Coules (“The Saviour of Cripplegate Square”) included a radio play from the superb radio series he oversaw featuring the brilliant Clive Merrison as Holmes. Chris Redmond (“The Adventure of St. Nicholas the Elephant”) wrote one of the best non-fiction Holmes books I’ve ever read, The Sherlock Holmes Handbook. 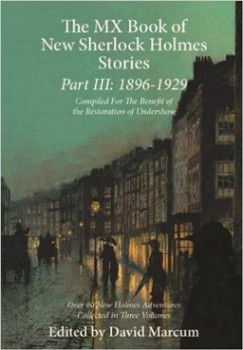 And yes, there are even more highlights in Book Three. Paul D. Gilbert (“The Adventure of The Regular Passenger”) has a new novel, Sherlock Holmes & The Unholy Trinity, coming out the same day as this collection. Matthew J. Elliot (“The Adventure of the Reluctant Corpse”) has scripted over 260 radio plays and wrote for (the now defunct) Sherlock Magazine at the same time as I did. Larry Millett (“The Opera Thief”) wrote the Shadwell Rafferty series, which is my favorite of those using the ‘Holmes in America’ motif.

And, since this is my column…”The Adventure of the Parson’s Son” is mine. You, wise reader, know about the sad case of George Edalji because you read about it here. Doyle’s involvement came after Edalji had been released from prison. I moved back to the time of the outrages and Edalji’s arrest, then put Holmes on the case. A three-part miniseries about the affair, Arthur and George, just wrapped up on PBS last night.

The three covers are done by Bob Gibson and look great! Coming in at about 1,200 pages, this anthology will cover your Holmes reading needs for quite some time. And if you get Book Three, you can have a story by a prolific Black Gater (me) on your bookshelf! Although, if you buy Book Two, you’d have one from an even more prolific Black Gater (Bill Maynard)… Heck, buy ‘em both!

This was a great project for a good cause. We’re very proud to have one of our own, Mr. Hugh Ashton, participate. Thank you for your kind words.

Inkbeans – For my money, there is no better combo of quality and price than Hugh’s ebook collections. Obviously, I’m a huge fan and I’m pleased to be in the same collection with him.

I posted a coming soon on this a couple of weeks ago, with the complete author list.

(http://tipthewink.net/2015/09/08/coming-soon-the-mx-book-of-new-sherlock-holmes-stories/) I’m really eager for this!

THE Holmes Anthology is Out! | Almost Holmes

[…] have mentioned (oh, maybe, more than once…) here and over at Black Gate, that there was a new anthology of Holmes stories coming up. And that I had a story in Volume […]