R. A. MacAvoy published her first novel, Tea with the Black Dragon, in May 1983. It was nominated for the Hugo, Nebula, and World Fantasy Awards, and received the 1984 Locus Award for Best First Novel. Not too surprisingly, she won the John W. Campbell Award for Best New Writer in 1984.

Her next novel, Damiano, the tale of a wizard’s son befriended by the Archangel Raphael, appeared in 1984, and became the first novel of an ambitious fantasy trilogy. The next two were published as paperback originals by Bantam Books the same year, all with gorgeous wraparound covers by Jim Burns (click the images above for bigger versions.)

Here’s the back covers for all three.

All three novels were reprinted in a single omnibus collection, titled A Trio for Lute, by the Science Fiction Book Club in April 1985, with a cover by Walter Velez of Thieves’ World fame. Bantam Spectra produced a paperback omnibus in July 1988 (below), with a wraparound cover by the great Gary Ruddell. 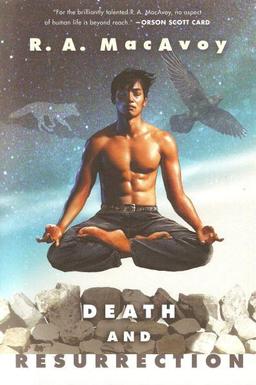 After the publication of the Lens of the World trilogy, MacAvoy was diagnosed with dystonia, a neurological disorder, and wrote virtually nothing for over a decade. She has reportedly returned to writing, and her first new full-length novel in nearly 20 years, Death and Resurrection, appeared in 2011 from Prime Books.

The Damiano trilogy was out of print in the US for nearly 25 years, until all three volumes were made available again last year by Open Road Media, in both trade paperback and digital editions.

Such good, good, good books, and long overdue for a revisit.

Have you read any of her other books, Joe?

I’ve read the Lens of the World trilogy, which I also highly, highly recommend. I need to read the Black Dragon books and her new one.

I remember these. They had been on my TBR pile forever and then I forgot about them. I should see if I can find some copied somewhere.

Tim – They’re still in print in new trade paperback editions, but I found no shortage of folks selling the complete trilogy on eBay, at very reasonable prices. These aren’t scarce books by any means.

I love this series to pieces. She almost gives Italy itself a voice. It’s such a … lush series of books.

I keep trying to pimp these on people, but most folks have never heard of her 🙁

Really?? That’s a shame. This field has such a short history. She was a very big name in the 80s and 90s.

Perhaps she will again, now that she’s started writing again.

So, I was a rather naughty young man, when I was a young man – a rock lead vocalist/writer/rhythm guitar player over 30 years of insanity and mostly a lot if fun, occasionally too much fun! Which brings me to my comment – I found myself in a few rather nasty scrapes over a three year period when I was 21 through 24 and found out, sometimes “justice” means “oh, you were attacked but you ended up winning? ENJOY SOME JAIL”!

It was provincial (Canada) not federal, and so it was a really, REALLY boring nine months! I was able to play guitar, but who wants to play guitar around a bunch of dudes, with a few taking “liberties” with their eyes”!! yuk! No trouble though except for three scraps!

Boredom was more than enough for me to refrain from winning any more fights, and the minutes drag behind you like five 25 lb bowling balls chained to each leg!

I scoured the prison camp library and found the “Lord Of The Rings” trilogy. Fantastic read and a real boredom killer! Hey I was onto something here!! Back to the library and that’s when I found a three book series “Damiano – Damiano’s Lute & Raphael”!!

I fell right in love with these books and read them over and over and before I knew it I was being kicked out!
As soon as I got home and, yes it was weird being free after nine months living a specific way of life where the slightest annoyance can set some seriously mean folks right off!!

Case in point (one quick story) a terrified kid came through processing and it was his first time in jail and he was sent to the prison camp I was in obviously, where there are no bars, no electric fences etc, you’re in the middle of nowhere and when you are processed the guards tell you – “you can walk away anytime you feel like it. You won’t get far, there’s nothing but thousands and thousands of acres of old wild forest and bush. In the warm months the mosquitoes will ick you up and carry you straight back to jail minus millions of tiny chunks of your flesh!

In the winter the guards will follow the instructions from the helicopter and they’ll head straight for you with a hammer and chisels to chisel your ass out of the solid block of ice you’ll find yourself in!even short time in jail

So I saw this kid come through and his eyes were as wide as dinner plates! I walked right over and introduced myself and started telling him what to do and what not to do! He was just terrified and I tried to calm him down telling him I would help him get through his three month sentence.

He was in for stealing a car! The judge was an asshole, he knew the kid was gonna get picked on and although sexual assaults are rare in provincial time, beatings are on the menu! The slightest thing sets idiots off.

One day some hotrod was yelling at the kid for something, and at times like that you don’t want to stick up for someone, not right off the bat because it can make it worse because dudes will be “oh, a punk who needs big brother to defend him…wait till he’s on his own” and beatings would be coming, so I sat back and watched but let the kid try and handle it. He did a terrible job but he got off with a threatening warning.

After that he stuck to me like glue and I had to keep telling him to calm down and stop following me around all the time, while reassuring him if things got out of hand I’d jump in, but he would have to throw some shots regardless.Once they see you won’t let anyone mess with you, even if you get a complimentary beating of a lifetime, they’ll respect you and leave you alone.

The kid was ultra terrified and started whistling from sheer nerves YOU DO NOT WHISTLE IN JAIL!! People will instantly be on your ass wanting to know why you’re so happy? Are you a stool pigeon?? yes, they still use that.

So a couple of hot rods were right on the kid, right in his face flipping out and tears started rolling down his face, so of course they smelled blood and went even harder…so I rescued the kid. That is all it takes folks!!
Early the next morning I woke up and lifted my head up in the left dorm where 60 bunk beds were three feet apart except when the place was over filled and then there were mattresses between the bunks and some poor guy would sleep on the floor on a two inch thick straw filled mattress just like the pioneers who cleared the land with axes and two man saws!

The kid’s bed was empty and not made. Yup, he got up early and buggered off!! Later that evening, well after dark the kid’s father turns up with his son and turned him back in. I felt so bad for that poor kid, that judge should never have sentenced that kid to jail like that. It was his first and ONLY offence and sending a kid like that to a jail with some of the hardest mean spirited bastards you’ll ever know can only end two ways. The kid gets a prison education, makes prison friends who will get together when they’re released and that kid is lost! Or, the kid will get the tar beat out of him and he’ll spend his time in “PC” protective custody where God only knows WHAT would be in your food and nobody likes you, in fact they all hate you because “PC” is for “rats”!!

Sometimes judges need to remember the “mercy” part of “justice”

I am NOT that stupid young tar hole any longer folks, I’ve been married for 36 years, I’m 60 and I am a Christian!
When I read those books it felt as though I was right there creeping around dark hallways in the Papal palace!
Being locked up, trapped, stuck does something you can’t quite explain to your spirit. When I read those books, it was easier to actually get lost in the pages and feel the characters come to life than it is when you’re comfortable at home reading in bed with a face full of popcorn!

It was an experience!!
Thank you R. A. MacAvoy!! I bought the series soon after I got home and read them multiple times. My drummer asked if he could read them and I hesitated because I had planned on replacing that drummer but thought if I said no, the guys would think I was being an idiot, not lending the guy some books?

Never got them back!!
I told my sons about those books a few times over the years when they were boys. A couple of months back I was recovering from a near death hospital “pleasure cruise” and my youngest son, who’s 30 hands me a brown paper bag, and inside were the three books!!!

I’m on the second round and just cannot possibly get tired of them!!

SO THANK YOU!! You gave me a key that unlocked that jail for a few hours each night and it was awesome!!
Jack ~'()’~