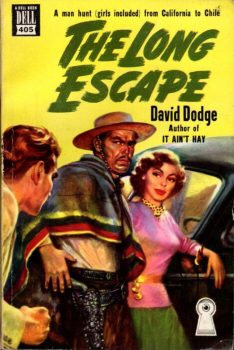 I have discovered several writers I like, such as Day Keene, Pete Hamill, and Richard Powell, through the Hard Case Crime imprint. Another writer they reissued is David Dodge. Dodge wrote To Catch a Thief, which Alfred Hitchcock masterfully turned into a taut thriller film.

Two years earlier, Dodge’s Plunder of the Sun, an adventure novel starring Al Colby, was filmed with Glenn Ford. That script was written by hardboiled writer Jonathan Latimer. He wrote some fine movies in the genre, including The Glass Key, Nocturne, The Big Clock, and The Night has a Thousand Eyes.

Accountant Whit Whitney was Dodge’s first character. Dodge was a certified public accountant, and he wrote four hardboiled PI-like novels featuring him. He wrote the first when he bet his wife he could write a better mystery novel than the one she was currently reading.

He served in the Navy during the war, and he explored Latin America with his family after getting out. This led to the creation of Al Colby. Plunder of the Sun (you can listen to a radio play of it here) was Colby’s second book (of three). He is an American private eye, living in Mexico City.

The Long Escape – originally a Dell Mapback, and now available as an affordable ebook – is his first, and Colby is about to take a weekend trip when he gets a letter from an LA lawyer named Adams. Robert R. Parker had done a runner on his shrew of a wife; who is Adams’ client. In order for her to sell some property, she needs him to either agree to it, or be definitely dead.

As Adams says, “I am very anxious to either get in touch with Mr. Parker or to obtain sound evidence that he has departed this vale of tears. Personally, I would prefer to learn that he is dead, as this would simplify matters, but I do not suggest that you take any steps to help him from this life to a better one.”

That’s an atypical example of humor in the series. The Whit Whitney books are lighter in tone. Colby is a cynical guy, and these books aren’t dark, but they aren’t humorous, either. Think of them as serious. They’re a mix of pulp adventure and hardboiled PI.

Dodge became a popular travel writer, writing humorous books of his adventures with wife and daughter. He said that many writers traveled to gather material to write about. His goal was to write in order to get money to travel. According to Ellery Queen’s Mystery Magazine.

“[David] Dodge started writing a letter to his friends in the States, telling all about the first leg of their trip, through Mexico and Guatemala. The letter got so voluminous that Dodge concluded it would be more economical to publish it as a book, and send out copies, than to mail carbons to all and sundry by air. Thus, his best-selling travel story, How Green Was My Father.”

Step-by-step, Colby gets on Parker’s trail. As he jumps around Central and South America, Dodge’s vast knowledge of Latin America layers in a richness that can’t be faked. Dodge was no poser. The lifestyle, the locations, the modes of travel – the man was writing from experience.

Through dogged determination and his smarts, he finds Parker’s brother, niece, and nephew. The niece, of course, is breathtakingly beautiful. I’m not gonna spoil this mystery novel, which has an O. Henry-worthy twist. But Colby faces a dilemma on whether to complete the job or not.

I liked The Long Escape, though I prefer the pulpy adventure of Plunder of the Sun (I would like to see the Glen Ford movie). I’ve not read the third Colby book, The Red Tassel, which seems to be set in the Andes Mountains.

I don’t think the first two books need to be read in order. And I liked Plunder of the Sun more, of the two. But I recommend both – and you can get Plunder in paperback format, for those of us who like to still hold our books. But The Long Escape ebook is a quick, easy way to get started on Dodge.

He wrote standalone thrillers after that third Colby novel: he was done with series characters. 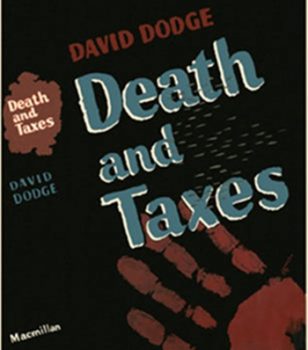 Now, let’s go back to his first series. In Death and Taxes, James ‘Whit’ Whitney is partners with George MacLeod in an accounting firm. He bought into the firm, and MacLeod seems to be more in charge. Or at least, the ‘big picture guy’ – meaning Whitney focused on the actual work.

Before Whitney’s time, MacLeod had represented a bootlegger name Wolff, who the Treasury Department nailed on tax evasion (same way the feds got Al Capone). After paying over a million dollars, Wolff died when his parachute didn’t open as he bailed out of the plane as it apparently had problems over the Rockies. MacLeod cuts Whitney’s month-long vacation short on the very first day, saying he found something that shows somebody else was also profiting from the bootlegging operation. And that Wolff’s estate is due about a half million dollars back. 10% to the firm (that’s a LOT of money in 1941). But they’ve got less than a week to put it all together and file.

Within 24 hours, MacLeod is found murdered in the firm’s vault, and it’s up to Whit to figure out what his now former partner had discovered. In less than a week. Whitney is a lot more fun than Al Colby. He cracks self-deprecating jokes. Has no illusions that he is a tough guy. And puts his head down and bulls ahead to figure out the mystery.

Chapter one sets up the case. Chapter two establishes MacLeod is a cheating husband and a marginal drunk. Chapter three finds Whitney on his vacation, drinking and sunning and meeting attractive young women. MacLeod calls him back to the office, and Whit ends up in a fight at the bar, the young ladies done with him, his vacation over, and he has a terrible sunburn. It’s fun, and we learn about Whit some. This isn’t Al Colby.

San Francisco police detective Lieutenant Webster is on the case, and he’s a good character. He’s not dumb (like Inspector Lestrade), though no genius, either. He can think his way through things, and he follows the evidence. He uses Whitney as bait to draw out the bad guys, and a big cop named Larson is assigned as bodyguard. That’s fun too.

Whitney is no code-driven private eye. He tries to bail out when it gets dangerous, but can’t quite make it. His brains do help solve the case, as do his staff. It’s clear Whit is a nicer guy than MacLeod was. There’s a high action finish.

I am a budget analyst, and I like a private eye-ish accountant! I like Whitney as a character, and I’d like to read the other three books. Unfortunately, they are long out of print, and haven’t been made available as an ebook, like this one has.

Dodge does not write in an over-the-top or heavy-handed manner. His sentences read easily, and he knows his topics very well – be it accounting or Central America. The plots are fine. I’m looking forward to more Whitney reading. And I’ll probably read To Catch a Thief some day – I’ve only seen the movie.

I’ve not read his travel books, but they were popular, and the humorous tone is appealing. 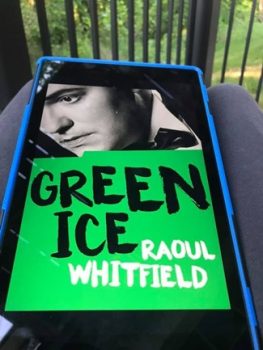 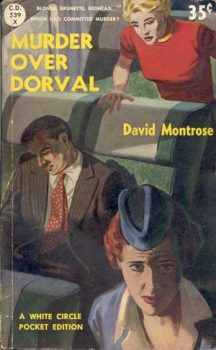 I read Plunder of the Sun when Hard Case Crime reprinted it and can testify that it’s a crackerjack thriller.

We agree!! Ha ha ha! I do want to see the movie, even though they changed the locale. The Long Escape was good – but I I definitely liked Plunder better. I have not read The Last Match, which Hard Case also reprinted. It is an ebook.

I guess we can expect a rain of blood and a rash of two-headed births in the near future!

I have The Last Match but haven’t gotten around to it yet.

Great reviews, Bob. Thanks. The more people who read David Dodge the better! To find out more about Dodge and his work, check out “A David Dodge Companion”