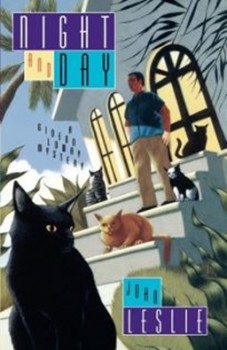 I wanted to bring over another post from The Public life of Sherlock Holmes. From my experience, this is a WAAAAAY below the radar private eye series. But I’ve read it through twice, and I really like it. And it’s got a very Pulp Era atmosphere, though it was written in the nineties. So, here’s a revised essay on John Leslie’s Key West, piano-playing, private eye.

If you read this column, (or are a FB friend) you know that John D. MacDonald, author of the Travis McGee series, Cape Fear (originally titled The Executioners), and much, much more, is my favorite writer. And I believe, one of the greatest American writers of the twentieth century, in any genre. His is the pre-eminent name in the subcategory of ‘Florida writers.’ Randy Wayne White’s Doc Ford, a marine biologist who lives in a stilt house, is absolutely McGee’s successor. I think White is a top-notch writer and I certainly recommend that series.

I’m not as up on this group as I used to be, but Carl Hiassen is probably the best-known Florida scribe these days. His biting satire and hilarious situations can be laugh-out-loud reading. In a similar vein to Hiassen are the works of Lawrence Shames. He also pokes fun at the absurdities of Florida life with a series of mostly unconnected books set in Key West. They provide some chuckles.

There are only four books in the series, and it appears that no more will be forthcoming. This is a shame, because Lowry is an interesting character. Killing Me Softly was published in 1994 and Lowry is in his fifties. Except for an all-expenses paid, two-year vacation to Korea; – courtesy of Uncle Sam – he has spent his entire life in Key West. He’s a true-blue Conch.

And that matters, as the sense of tribe plays a big part of the series. Whether or not someone was one of “our people” was a major factor in how you responded to situations regarding them. But unlike his father, Lowry doesn’t simply identify with natives and locals.

Both his parents are dead (this is not a major spoiler), but both of them play a significant role in Lowry’s make-up and how he approaches life. His brother, a slick politician up in Tallahassee, is quite different from Lowry and that helps define the character in the first book. 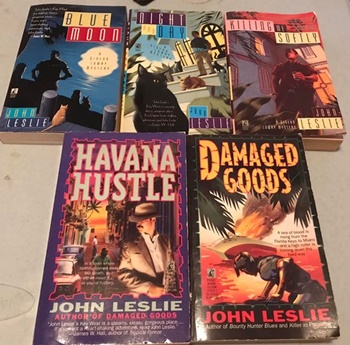 Lowry has a small office in his run-down home on Duval Street, where commercial interests have been trying to buy him out for years, but he resists. The family that rules Key West wants to build an ugly hotel directly behind his house. Lowry doesn’t pliably ‘move with the times’ and gets around town on his bicycle. Though he breaks out the Buick Electra when he has to go a bit further.

I have been to Key West twice – though those were over twenty years ago. But the city moves to its own beat. There’s a laconic, drowsy aura to Key West – though the night life is certainly frenetic. But it’s got much more the feel of forties Florida: A place in an older time, than most cities have. And Leslie’s books capture that.

The ‘Old Key West’ trying to hang on in the face of modern day is a palpable element. The setting really does create an old school, hardboiled private eye atmosphere. Leslie is adept at this, and it helped make the series resonate in my mind over the years.

Lowry an alcoholic who doesn’t get a lot of detective work. You’ve run into that stereotype before. But he is also an accomplished pianist, and there are times he earns more money from tickling the ivories in Key West bars than he does at being a PI. The Key West setting, the complex character and the musical element all combine for an interesting detective stew.

Book one has a Ross MacDonald feel, as a woman hires Lowry to find out who killed her sister over three decades before. As is usually the case, there are people who don’t want a private investigator digging into the past, and when Lowry finally uncovers the truth, it has a seismic impact. The sense of place is strongly established in this first book and is truly one of the series’ strengths. The Key West of the tourists is not the same as the Key West of the natives. Even the contrast between the two crime families typifies the locale.

In the follow-up, Night and Day (that’s the title of Cole Porter’s best-known song. Fred Astaire and Frank Sinatra famously covered it), events take place during Hemingway Days. A writer working on an unfinished Hemingway manuscript is killed and events transpire. As with the first book, the Key West locale becomes a character in its own right; not just physical, but culturally and socially. Hemingway, of course, casts a long shadow over Key West to this day, and its deftly handled in the book.

Having an older protagonist also sets the series apart. There’s a young, attractive bartender at one of the places he plays piano. But there’s no romantic possibility – she likely sees him as more of a father figure. Lowry does have a sex life (book three opens with his going to an escort service, which has serious repercussions), but that Hollywood trope of the attractive male PI bedding down the hot babe isn’t part of this series.

Love for Sale brings treasure-hunting into the mix. Shipwreck salvaging plays a prominent and fascinating role in the history of Key West and a valuable chalice causes Lowry a great deal of trouble in this third installment in the series. By the end, this one is a bit darker and has a pretty despicable antagonist.

Blue Moon has a very Travis McGee-esque feel to it. Gabriella Wade is an old flame now engaged to a fast moving dealmaker. Lowry finds himself looking into the man’s background. Seek and ye shall find. At the same time, pressure is really being brought to bear on him and the owner of the Cuban grocery store next door to sell their properties and make way for a mall. Lowry’s got a full load. And the man who doesn’t even want to travel up to Miami flies out west to Wyoming in this one.

There are a couple of guest appearances in this book. Lowry calls a New Orleans cop he had met before for some assistance. It’s James Lee Burke’s Dave Robicheaux. Burke’s long-running series about Robicheaux is one of the best in the modern hard-boiled genre. I wrote about it here at Black Gate. Also, Lowry places a phone call to Hoke Moseley. Moseley is the star of Charles Willeford’s revered hardboiled cop series. Both are just used for one-scene diversions. 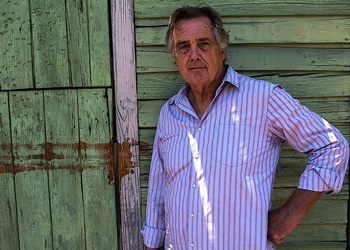 I emailed John Leslie just a few years ago and asked if there would be any more Lowry books. He is still writing, but he indicated that there are no plans for any more books about Key West’s preeminent piano playing private eye.

That’s too bad, as Lowry carves out his own niche in a well-populated field. He’s about sixty at the end of Blue Moon, so he’s experienced and mature, but in no way decrepit. For example, he remembers the boxing “lessons” his dad taught him, but the body and the mind aren’t in perfect sync at his age. He doesn’t try to be cool, but as a piano player, he is cool. And he doesn’t whine a lot, like Philip Marlowe. I hope John changes his mind and finds one more Key West mystery for Lowry to solve.

Some years ago, I read his Havana Hustle and Damaged Goods and liked them. They’re rougher, more action-packed crime books. As I recall, they’re more in the vein of something from James Lee Hall. I think John Leslie’s worth checking out. Had on down to the Keys, stop by a piano bar and check out Gideon Lowry.

I have the first three in paperback, but they’re out of print. All four are available as ebooks for only $2.99 each. THAT is a steal. Trust Black Gate’s in-house mystery guy on that one. And all are free if you do Kindle Unlimited. None of my mystery friends ever comment on this series. But I think it’s a fine under-the-radar PI one, with a great use of Key West as the locale. Highly recommended. 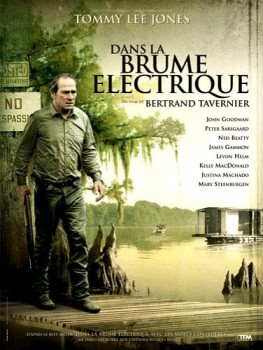 they are all in kindle unlimited eh? i might have to check this series out now!

Yep. There are quite a few good PI/hardboiled books on KU. I read some William Harmon Coxe and William Campbell Gault. And Wade Miller, to name a few.