Experience Skallagrim – In the Vales of Pagarna by Stephen R. Babb in all its forms. This post covers everything to get you hooked, from a summary, review, excerpts, and links to the complementing albums from Glass Hammer. Reading Skallagrim feels like you are a witness to the live version of Frazetta’s “Against the Gods” painting! You actually witness a hero grab a sword from the sky.

The opening scene poses a set of mysteries as the titular protagonist is brutally attacked in the streets of Archon, the Dreaming City. He loses his memory during the struggle, by wounds or sorcery, so the hero and the reader want to know: Why Skallagrim in a melee? Who is he, really? Why does he feel protective over a maiden kidnapped during the conflict? Why are multiple sorcerers after him? Why the hell can he grab a sentient, screaming sword that materializes from a sudden storm?

The rest of the book unravels these questions, as Skallagrim races against time to save the mystery maiden. He’ll wrestle with eldritch, chthonic creatures, a herd of ghouls, a few necromancers, and an assassin. As Skallagrim unearths the weird history of Andorath’s Southern Region, we get to learn about it as he battles. The book stands alone, but did you know that Stephen R. Babb has been a progressive rocker and theatrical-album-leader for thirty years (more on Glass Hammer below!). Poems and lyrics infuse the prose. For the full effect, readers should listen to the complementary Skallagrim albums. These are not Audio Books. These are thematic rock sets chronicling Skallagrim’s heroic journey.  Embedded below are the opening songs to (1) and (2).  Listen to these!  Babb is creating a rich world here. 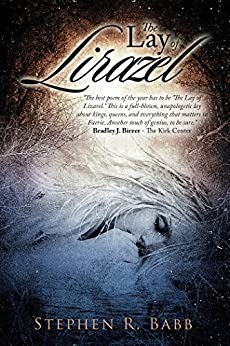 Want to learn more about the creation of Skallagrim’s world? Check out Oliver Brackenbury’s recent interview with the author on his podcast So I’m Writing a Novel Interview (Aug 22 2022). Babb reveals his influences, from Tolkien, Dunsany, and RE Howard, and discusses how music informs writing (and vice versa). Listening to this I learned that Skallagrim’s world actually catalyzed in Glass Hammer’s 2005 album The Inconsolable Secret (which has tracks called Lirazel, Mog Ruith!), which then inspired the epic poem Lay of Lirazel (2014). To know why those matter, you’ll have to read the book.

Skallagrim: In the Vales of Pagarna reads fast and blends the Sword & Sorcery style (action-heavy, focused on a lone hero) with an epic tale (novel form, save-the-world in addition to save-yourself motivations).  Plenty of call-outs and imagery evoke S&S influences, most obviously, a sorcerous city full of towers called the “Archon the Dreaming City” (that echoes Elric’s home of Melniboné) and the sentient “screaming” sword Terminus (that feels like a cousin of Stormbringer). In any event, Skallagrim is more of its own tale than it is a homage to its dark fantasy roots. Information flow is deceptively well placed; one of my favorite chapters was halfway through the novel because it revealed why Skallagrim’s nickname was Quickhands.

The cover blurb below is a splendid summary; below that are excerpts and embedded samples of the music.

Skallagrim wakes in the middle of a fight for his life with only the vaguest idea of who he is. Facing an angry mob of murderous cutthroats, he watches helplessly while the love of his life is abducted before his eyes. Finally, with a crushing sense of despair, he realizes he’s going to die without even knowing her name.

But he doesn’t die.

To find the girl and take his revenge upon the fiend who took her, Skallagrim, wounded and exhausted, must endure a journey like no other. He’ll face madmen, ghouls, tentacled horrors, and witches, both foul and fair, as he races toward a final showdown that will have readers on the edge of their seats.

An awe-inspiring tale of adventure, triumph, and tragedy, set in a brutal, unforgiving wilderness and packed with heart-stopping action, Skallagrim – In The Vales Of Pagarna marks the first installment of an outstanding new series.

Excerpts Reveal What to Expect

The forest was weirdly beautiful in a somber, funereal way, like a colossal mausoleum whose joyless vaults were supported by interwoven columns, their vast, mournful chambers hollowed out by the hands of giants. There was a certain thrill to walking in that place with its cool air and ancient trees whose limbs trailed moss like great sweeping beards of grey.

…geysers of black water shot into the air from a hundred places at once. The plumes sparkled in the weird, flickering light, then seemed to cascade in slow motion in a myriad of diamond-like droplets. From the point at which each geyser had sprung, writhing tentacles sprouted—fiendish bouquets resembling Devil’s Fingers fungus… one such arm, slick and smelly with a coating of gleba, whipped the water directly in front of Skallagrim. He did not remember drawing Terminus, but the sentient sword was in his hand. He swept the blade low, severing the tentacle from the submerged, suberumpent egg from which it had burst. An immediate release or explosion of spores caught Skallagrim off guard, and he coughed painfully—his throat inflamed….

Glass Hammer is an American progressive rock band from Chattanooga, Tennessee, created and led by Steve Babb and Fred Schendel. Babb and Schendel, who founded the band in 1992, are the only constant members in the lineup, having surrounded themselves by various guest performers

First off, he prefers “Steve” to “Stephen.” Now that that’s out of the way…

He’s best known as the bassist and co-writer for the prog-rock group Glass Hammer. A professional musician for most of his life, he started at the age of twelve as a church pianist. Since then, he has traveled the US and a handful of other countries in various bands.

Glass Hammer, which he founded, has received critical acclaim for their twenty-one studio albums, headlined major festivals, and have become one of the most respected bands of the progressive rock genre.

In 1990, he had the good sense to marry the right girl, come home from the road, settle down and start a business. Since then, he has busied himself in the production of numerous albums for songwriters, the recording of audiobooks, and in the day-to-day tasks required to operate a recording studio while maintaining the persona of prog-rock star, prolific songwriter, and lyricist. This last bit, he enjoys to the fullest.

In 2005 he penned the epic poem, The Lay Of Lirazel, which was published in 2014. For that effort he was honored with The Imperishable Flame Award by The North East Tolkien Society.

Steve makes his home in Chattanooga, Tennessee, with his wife Julie and son Jon-Michael.

S.E. Lindberg is a Managing Editor at Black Gate, regularly reviewing books and interviewing authors on the topic of “Beauty & Art in Weird-Fantasy Fiction.” He is also the lead moderator of the Goodreads Sword & Sorcery Group and an intern for Tales from the Magician’s Skull magazine. As for crafting stories, he has contributed six entries across Perseid Press’s Heroes in Hell and Heroika series, has an entry in Weirdbook Annual #3: Zombies  He independently publishes novels under the banner Dyscrasia Fiction; short stories of Dyscrasia Fiction have appeared in Whetstone, Swords & Sorcery online magazine, Rogue In the House Podcast’s A Book of Blades, DMR’s Terra Incognita, and (soon) the 9th issue of Tales From the Magician’s Skull.