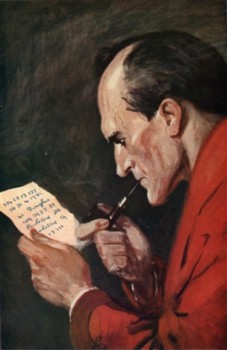 Back on September 29th of last year, I created a linked index of all The Public Life of Sherlock Holmes posts up to that date, plus a few extras that I’d written here at Black Gate. Well, since this column debuted on March 10, 2014 (yep, a year ago tomorrow!), I figured I’d create an index of all the posts written since that first index.

As the past year has shown, I’m not just about Holmes. I’ve looked at other mystery topics, including my love of hard boiled private eyes. And I’ve touched on fantasy, science fiction, true crime and gaming.

William Gillette – The first great Holmes on stage or screen.

The Abbey Grange Examined – Did Holmes get played in this story?

Solar Pons – The greatest Holmes successor and pastiche of them all.

Holmes For Christmas – Holmes for the Holidays.

The Science Fictional Solar Pons – Pons had some fantastical adventures.

Watson’s Christmas Trick – My own Holmes mini-pastiche for Christmas.

The Crime Doctor – Watson investigates on his own better than Holmes credits him for.

The Case of George Edalji – Conan Doyle played a huge role in exposing this unjust conviction.

New Holmes Story by Doyle Found – Actually, I don’t think it’s by Doyle at all.

Modular: Warlords of the Accordlands – An under-appreciated d20 campaign world.

Talisman – Excellent app of the popular fantasy board game.

Ya Gotta Ask – You can create your own opportunities as a writer.

Cohen the Barbarian – A look at Terry Pratchett’s Conan satire.

The Lords of Dus – Lawrence Watt Evans’ fantasy series from the eighties.

Might perhaps be a good idea to use more categories to make it easier to find related content.
Really wish there was a way to get all Sword & Sorcery articles listed instead of just all “Conan” or all “Pulp”.

We do have a list of tags and categories we can use for our posts. For example, one of my Holmes posts will have mystery, books, movies and Sherlock Holmes. They’re listed at the bottom of the post.

But I know what you mean. The key is for us posters to use them. I know “fantasy” is one, but it’s pretty hit and miss.

They exist, but there isn’t actually any “Sherlock Holmes” tag. There is “Books” and “Movies and TV”, but these are so broad that they are not really helpful to get a list for any specific series of posts or genre.

Oops. The post lists any categories that we selected.

There are way more tags than categories. Perhaps listing the tags on the page, along with the categories, would make it easier to search?