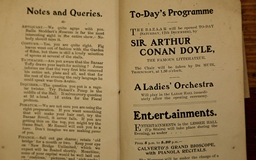 Last week, the Sherlockian world was abuzz with news that a new Holmes story had been discovered: One that was written by Sir Arthur Conan Doyle himself back in 1903.

A few basics: On March 5, 1927, “The Adventure of Shoscombe Old Place” appeared in Liberty Magazine. There would be no more Holmes tales from Doyle’s pen. Thus, the official Sherlockian Canon came to a close at 60: 56 short stories and 4 novels (novellas, really).

Doyle had previously written two short shorts featuring his erstwhile detective. 1896’ “The Field Bazaar” was written to raise funds for Edinburgh University. While in 1924, Doyle wrote and donated “How Watson Learned the Trick” to the Queen’s Dollhouse project.

Hesketh Pearson, when going through Doyle’s papers for a biography, found the outline of a Holmes tale that may or may not have been written by Sir Arthur. Involving a man on stilts, pastiche authors have written the story to less than stellar results.

Of course, being a devout reader of The Public Life of Sherlock Holmes, you already know about the “lost” found Doyle story that was actually written by Arthur Whitaker.

Add in a couple of plays Doyle wrote and you’ve got the official writings by the original author. Though Walter Elliot claims there’s one more.

A bridge in the Scottish town of Selkirk had been destroyed in a flood and in 1903 they needed to come up with money to build a new one. Conan Doyle was a guest speaker at a bazaar they hosted. The forty-eight page The Book O the Brig was published as part of the fund raising effort. It included poems, fiction and miscellany.

One item, with no author listed, was “’Sherlock Holmes’ – DISCOVERING THE BORDER BURGHS, and, BY DEDUCTION, the Brig Bazaar.” You can read it here. 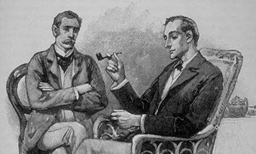 Using a ridiculous frame, Holmes and Watson are in their lodgings and the detective makes a series of deductions, leading to a conclusion that Watson is excited to go to Selkirk to see a bridge.

In an interview, Elliot says,  “It’s unsigned, and I’m not a specialist, but the vocabulary seems pretty close to the way Conan Doyle wrote. I’m fairly sure it was written by him.”

First: there’s no evidence anywhere that Doyle wrote the piece. You’d think somebody, somewhere, would have wanted to trumpet him as the author, certainly generating more sales to pay for the new bridge.

And second: I don’t think it’s very close to the way Doyle wrote. It’s more parody than pastiche. It’s nowhere as good as “The Field Bazaar” and “How Watson Learned the Trick.” Now, I can imagine Doyle dashing this thing off with barely any thought or effort (or care) and donating it to the cause. But that’s a thin rope to grasp.

I think it’s a bad piece written by a local who wanted to tip his cap to Doyle, who was going to be a guest of honor at the bazaar. My guess is that it didn’t impress the author too much.

The Canon will remain at 60. If “Field” and “Trick” haven’t been included in the official count, there’s no way this piece will be. And were I a wagering man, I’d bet it’s not going to be deemed official at all.

As a Sherlockian friend of mine commented on, “Sloane Street?” Where in the heck did that come from?

Good piece on why this isn’t a Doyle story.