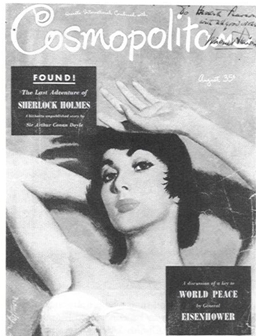 There are 60 original Sherlock Holmes stories written by Sir Arthur Conan Doyle: 56 short stories and 4 novels (novellas, really). He also wrote two very short Holmes “bits” that are not included in the official Canon, though all acknowledge they are his works.

In August of 1948, the Doyle Estate added a 61st story to the official list when Cosmopolitan proclaimed  “FOUND! The Last Adventure of SHERLOCK HOMES, a hitherto unpublished story by Sir Arthur Conan Doyle.”

Included in that issue was “The Man Who Was Wanted,” a long lost Holmes tale from the pen of Doyle himself. Five months later, London’s Sunday Dispatch serialized it in three installments during January of 1949.

Rumors of the story’s discovery had started in 1942 and Hesketh Pearson, the man who found it while working on an authorized biography of Conan Doyle, had printed the beginning of the story and commented on it in Conan Doyle: His Life and Art.

Notable Baker Street Irregulars such as Edgar Smith, Vincent Starrett, and Anthony Boucher raised a hue and cry for the story to be published. For Sherlockians, this was on a par with the discovery of a Homeric account of the first nine years of the Trojan War!

Adrian and Denis Conan Doyle, sons of Sir Arthur, who never missed an opportunity to squeeze a penny out of their father’s talents (it beat finding an actual job, apparently), waiting for the end of World War II and a more favorable publishing market, withheld the story.

Pearson and Adrian, who had read it, both stated that it wasn’t up to the standards of Conan Doyle’s other sixty stories (though some of those, such as “The Mazarin Stone,” were quite the stinkers).

Sherlockians all over America were less than thrilled with the story when it finally appeared. Charles Collins of the Chicago Tribune suggested renaming it, “The Case of the Editor Who Was Needed.” Another said that it fell flat on its face.

Edgar Smith included it in his lists as a pastiche, doubting it could be the work of Sir Arthur Conan Doyle himself. Other theories were that it was an intentional forgery by Adrian while another was that the brothers found a fragment written by their father and finished it themselves.

So, it wasn’t a classic: But who cared? It was one final Sherlock Holmes story from Sir Arthur himself!

The Author Who Was Wanted

On January 2 of 1949, Hesketh Pearson sent a letter to Vincent Starrett, telling him that an architect named Arthur Whitaker claimed he had written the story about thirty-five years earlier and had sent it to Conan Doyle. Doyle gave him ten guineas for the right to use the plot, which he never did. The typewritten manuscript was stored away with the author’s papers, to be found by Pearson years later.

Pearson, knowing that the Estate actively disliked him (The brothers decried his biography of Conan Doyle and insulted him even after his death), decided not to get in the middle of things and put Whitaker in touch with Starrett, a prominent Chicago newspaper writer and one of the world’s leading Sherlockians. Whitaker no longer had the letter from Conan Doyle, though he did have his typescript carbon of the story.

Since the story had been published under Conan Doyle’s name, Whitaker wanted the truth out, sure that it was just a mistaken attribution to the famed author. When he discovered that it was about to be printed in England, he wrote Denis Conan Doyle, telling him of the story behind the story.

As the Doyle brothers consistently did, they went into attack mode, saying that there wasn’t a shred of evidence and that the Estate would sue for damages anyone “casting aspersions upon our manuscript.”

Adrian added that the Estate’s lawyers had demanded evidence of Whitaker’s claim and if none were provided, they would sue Whitaker and Pearson if they spread falsehoods about the manuscript. Oh, those Doyle boys!

He also stated that if Whitaker could “show one scrap of evidence” the Estate would insist on Cosmopolitan publishing an explanatory notice and being repaid their monies. “As honorable people, we could do nothing less.”

Adrian had declared war on a befuddled Whitaker, who had thought he was doing the Estate a favor by not remaining quiet with British publication upcoming. After all, the story wasn’t actually written by Arthur Conan Doyle!

The victory would go to Whitaker.

A relative had returned Conan Doyle’s letter to Whitaker. At a February, 1949 meeting between lawyers for both sides, the Estate acknowledged the validity of Whitaker’s claim. The Estate paid Whitaker 150 pounds (a pittance of the reported US monies they had received), of which 21 went for his legal expenses.

The Sunday Dispatch did run an article on February 27, 1949, admitting the discovery that Conan Doyle was not the story’s author. Interestingly, Cosmopolitan never did; nor did the Estate refund their payment!

In fact, a letter from Adrian in 1963 was the first time that the Estate publicly admitted that Conan Doyle didn’t write “The Man Who Was Wanted.” A few years before, Adrian had still been telling yarns about the story’s provenance.

So, the official Sherlockian Canon stands to this day at a count of 60 and will certainly remain so. Unlike the Conan Canon (hmm..), where dozens of pastiches of wildly varying quality have been decreed “official” and placed on a par with Robert E. Howard’s originals.

It’s Elementary – During his researches, Hesketh Pearson also found in Doyle’s papers an outline of an unwritten story. This is considered authentic and is known as “The Adventure of the Tall Man.” Haining included the text of Doyle’s notes as well as a completed pastiche written by Robert Cutter in his The Final Adventures of Sherlock Holmes.

I can’t comment on the story, but I do love that Cosmopolitan cover. The skimpy clothing, the languorous pose, the come-hither look in her eyes – they all say, “Come lie here beside me, and we’ll discuss world peace with General Eisenhower.”

[…] The “Lost” Holmes Story – One of my favorites; the strange story behind Arthur Whitaker’s pastiche, “The Man Who Was Wanted” […]

[…] The Public Life of Sherlock Holmes: The “Lost” Holmes Story […]

[…] Of course, being a devout reader of The Public Life of Sherlock Holmes, you already know about the “lost” found Doyle story that was actually written by Arthur Whitaker. […]

[…] is an enjoyable Holmes pastiche. Of course, you know most of this already because you surely read this post here at Black Gate, […]