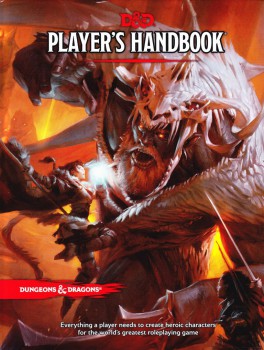 As previously announced, Dungeons & Dragons has released their new 5th edition D&D Player’s Handbook (Amazon). This is the flagship product of their revamped new edition of Dungeons & Dragons. At a time when every aspect of the gaming industry seems to be going gangbusters, it’s a perfect time for Dungeons & Dragons to relaunch a new version of their rules system. Now that I’ve had the book for a while, I’m ready to give some initial thoughts on the system.

When I earlier reviewed the Starter Set, I mentioned that I wasn’t too fond of 4th edition. Let me clarify that statement a bit in context, because my major problem with 4th edition has a direct bearing on how I view 5th edition. It’s not that I disliked 4th edition, per se, it’s just that I didn’t feel that 4th edition felt like the Dungeons & Dragons game system anymore. If someone had shown up and said, “Hey, I just stumbled upon this brand new RPG system” and shown me a book with the mechanics of 4th edition but without the Dungeons & Dragons branding, I might have been quite impressed. But as a transition from edition 3.5, I saw no reason to give up 3.5 and dive into an entirely new system just to play in the same setting. By contrast, the rules in 3rd edition seemed enough of an improvement over 2nd edition to easily justify the transition.

More importantly, though, I didn’t feel that 4th edition was a good entry-level rules system any longer. A year ago, my aunt approached me about my younger cousin (age 12) wanting to begin playing Dungeons & Dragons. I immediately suggested that I could send him my 3.5 edition manuals. I specifically suggested against trying to learn 4th edition rules, unless the kids he was wanting to play with were already using it.

So allow me to begin my review of the 5th edition Player’s Handbook by being absolutely clear:

If I were to introduce a brand new player to a fantasy roleplaying game today, the 5th edition of Dungeons & Dragons would be my top choice.

Part of this is a lesson hard learned. My favorite current gaming world is Pathfinder‘s Golarion, and I’m running my wife and a group of our friends through a Pathfinder campaign.  The game is fantastic and I’ve been able to incorporate some great storylines into the adventure. My wife and one of the players, however, are new to roleplaying, and Pathfinder is definitely not the most user-friendly rule system. Pathfinder is ideal for the experienced gamer who likes to tweak and customize characters in detail. You can stat up a new first level character easily, but after a few levels, the array of modifiers and feats embedded becomes dizzying. In order to help keep track of everything, I bought the official Pathfinder Player Character Folio (Amazon) and moved their 4th level characters over to these more comprehensive sheets. Every single 4th level character already had multiple errors leveling up  that we had to correct.

First, let’s see what the character creation options are in the Handbook because, as all gamers know, the best part of any roleplaying game is statting up the character.

Race options – There are 9 basic race options given in the Player’s Handbook. Some of the races are split into subrace options, which provide some variant modifiers, traits, and backgrounds.

For players of 4th edition, I think these will be familiar. If you’re like me and are more familiar with 3rd edition, the only one that might cause a raised eyebrow is Warlock. This is a spellcasting class built around the idea that your powers come from an extraplanar entity, such as the Archfey or Fiends from evil planes like the Abyss.

Class customization – Each class has a fairly consistent set of abilities, with relatively limited customization. Several martial classes allow the selection of a combat style, such as Archery or Defense or Two-Weapon Fighting, and the major customization for spellcasting classes is in the choice of spells. However, at 3rd level, each class begins to get some customization options, as they choose a Path, School, or Archetype. A Bard gets to choose at 3rd level whether they want to focus on the College of Lore or College of Valor, and the 3rd level Fighter chooses between becoming a Champion, Battle Master, or Eldritch Knight. This choice provides slightly different leveling-up options in addition to the core class abilities. Each class provides 2 or 3 of these options in the Player’s Handbook, but I see this as being one of the major ways that future supplements will provide new character options.

Personal characteristics – The character sheet provides space on the front page for 4 different key personal characteristics that are focused on character, rather than stats. There’s also an “Inspiration” mechanic, wherein the Dungeon Master (or even other players) can reward players for playing out these aspects of their character particularly well, which can then be spent to give an advantage on a check when needed.

Background choices – The background options provide some extra proficiencies, known languages, starting equipment, suggested personal characteristics, and then also a background feature that can have impact on roleplay. For example, a noble’s feature “Position of Privilege” means they are always welcome in high society, while an Acolyte’s “Shelter of the Faithful” feature means that they can find aid among fellow members of their faith. Again, I expect that future supplements will provide additional Background options, though this is a fairly comprehensive starting selection.

Leveling options – Multiclassing is available, with some slight ability score requirements. All of the rules for how to handle multiclassing are confined to less than 3 pages, so it’s fairly straightforward. There are also optional rules to select Feats in place of Ability Score increases as you level up, with a 6-page list of Feat options. As I mentioned earlier, this is one way that they’ve given some flexibility options for the experienced gamer, but made the base system very easy (and balanced) for those who want to just advance the normal way.

As has been discussed in many reviews leading up to the release, the core rules for this edition of the game are very light. Part 2 of the book, which covers most of the rules (excluding magic rules, which is Part 3), is only about 25 pages. The entire chapter on combat is only 10 pages long. In part, this is because the rules are clear and concise, and in part it’s because there’s a lot of material expected from previous versions of the game that wasn’t included in the Handbook this time around.

The main mechanic for making Ability Score or skill checks is pretty basic. You don’t get ranks in skills, as in 3rd edition, but you are able to gain proficiencies in certain skills, which allows you to add your proficiency bonus to them. Some class traits also double proficiency bonuses in certain skills, though this is relatively uncommon. Roll a D20, add in the relevant Ability modifier, and then add the proficiency bonus (if you’re proficient in the skill, equipment, or save). Other traits give an “advantage” or “disadvantage.” In these cases, you roll 2D20. An “advantage” means you take the better of the two rolls; a “disadvantage” means you take the worse of the two rolls. If the roll is a contest against another character, the larger roll wins. Otherwise, the modified roll has to beat a target Difficulty Class (DC) set by the Dungeon Master.

I do expect that some more combat mechanics will be introduced in the upcoming Dungeon Master’s Guide (Amazon), because there are some common combat actions from previous editions that aren’t covered. The combat rules cover basic Melee and Ranged attacks, opportunity attacks, two-weapon fighting, grappling, and shoving a creature. There’s a note indicating that Dungeon Masters can improvise other attack actions based on these. The Fighter class’s Battle Master archetype gains access to a number of maneuvers such as tripping, disarming, feinting, and so on, but there aren’t general rules for these to be implemented by other character types.

It takes a few sessions playing in a new game system to really know for sure how you feel about it, but my initial impression of Dungeons & Dragons 5th edition is extremely positive. Specifically, I think that D&D has potentially positioned itself once again as the central entry-level roleplaying game … the gateway drug to roleplaying, if you will. Their rules light approach make it a natural system for old fans to bring new players into the hobby, but even with this initial offering there are enough customization options to keep old school gamers happy playing with it. Whether this enthusiasm can be sustained will largely depend on what we see in upcoming core books and supplements, though I, for one, am looking forward to seeing what they can come up with.

Great article! I hope they keep the same simple approach with the other books.

Earlier today I finished reading the PH and taking part in a few skirmish sessions, and while my reaction hasn’t been overly positive, it seems I’m in the minority. But that’s okay. Like books, not every game is for everyone. There are a lot of things I like about the 5th version of D&D, but there are also plenty of things I don’t like. I skipped 4E altogether, but I rather liked the Warlock class.